How Do You Stop Serial Rapists? Test the Hundreds of Thousands of Backlogged Rape Kits 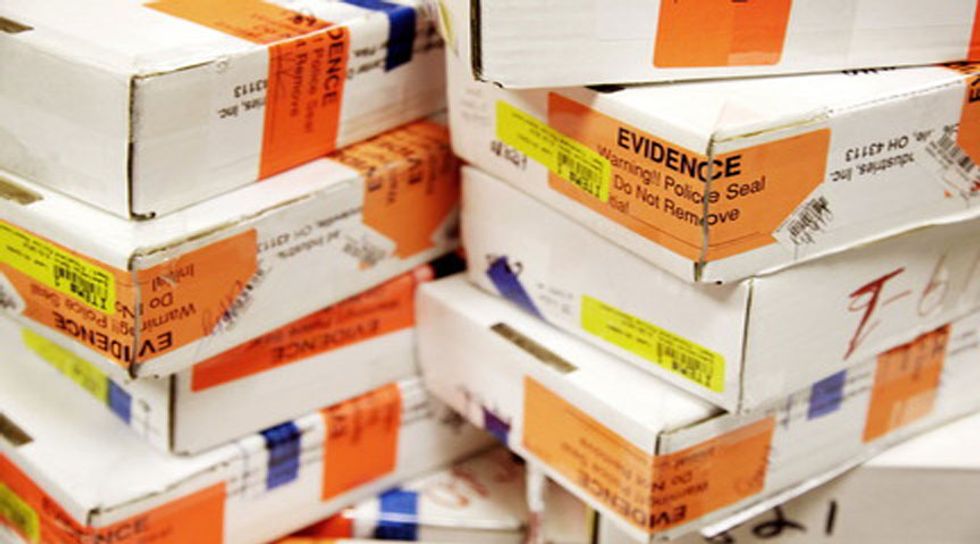 The federal Department of Justice and New York City officials recently announced grants totaling nearly $80 million to help clear the massive backlog of rape kits languishing, untested, in police evidence rooms across the country. The funding will enable the processing of more than 70,000 untested kits in more than 40 law enforcement jurisdictions, making a dent in the several hundred-thousand deep backlog that exists nationwide. In so doing, perhaps the percentage of rapists who ultimately serve time will be boosted as well. The percentage right now? Two. Meanwhile, jurisdictions that have cleared their backlogs have put hundreds of serial rapists behind bars.

In the immediate aftermath of a rape – ideally within hours, and in all cases within 72 hours – women are given the option of preserving DNA evidence of the assault. The evidence from this sexual assault forensic exam goes into a “rape kit,” which, in theory, will be processed and used in the prosecution of the assailant.

via A Path Appears

The process is extremely invasive. During the examination, victims are typically asked to undress; swabs are taken from the victim’s skin, genitalia, anus and mouth; and the victim is photographed extensively in order to preserve evidence of bruising and injuries. If the victim chooses to undergo the entire examination, it can take up to six hours.

In some jurisdictions, certified Sexual Assault Nurse Examiners (SANEs) can help relieve some of the trauma of the exam. However, many jurisdictions do not have SANEs or otherwise specially-trained medical personnel equipped to best respond to victims in the aftermath of a sexual assault. As a result, most victims feel depressed and violated after the examination. Some victims even describe their interactions with hospitals as having been “re-raped.”

After going through such an invasive process, victims naturally expect the evidence will be tested. However, that is often not the case. While the exact number of untested rape kits is unknown, the federal government has previously estimated that there are hundreds of thousands of them. Even when the kits are tested, it can be years between collection and testing – sometimes over ten years. With states’ statute of limitations for rape generally fixed at around three to five years, this renders the evidence effectively useless – at least for

the victim who had to endure the ordeal. Victims lose faith in the criminal justice system as a result.

Even if the kits are tested, often years after the assault, victims may be unnerved by the sudden resurfacing of an incident that they have tried hard to move past.

Unsurprisingly, the chief reason cited is resources. Testing a single rape kit costs between $1000 and $1500. Additionally, police resources are limited and crime labs are often stretched perilously thin as the demand for DNA testing has grown.

Another reason, however, lies in the systematic under-prioritization of prosecuting sexual crimes against women. Often, the testing of rape kits is solely within the detectives’ discretion. If they disbelieve—or even blame—the victim of sexual assault (an all-too common phenomenon), they will be less likely to test. These sentiments were echoed by Natasha Alexenko, a victim of rape and of the rape kit backlog (she waited close to ten years for her kit to be tested).

In an interview with The Daily Beast, she said “Part of the reason rape kits aren’t tested is because rape isn’t taken seriously.” Sarah Tofte, director of policy and advocacy for Joyful Heart, an agency dedicated to ending the backlog, agreed. In an interview with Think Progress, Tofte noted that police prioritize the cases they perceive as being the strongest, taking into account subjective judgment calls about the victim and her perceived credibility. “Ultimately, it’s about, does this victim deserve justice.”

Some detectives also fail to send in rape kits for testing when the rapist is known to the victim (by far the most common type of rape, making up more than 80 percent of rapes), citing the less dire need for processing when the victim’s assailant is known. However, this rationale fails to take into account the increased reliance jurors place on DNA evidence, and can lead to problems if the assailant argues that sex never took place. It also can serve to hide serial rapists.

Other jurisdictions will not test the kit if the case has not been charged. As a sergeant in the Seattle police department stated, the need for DNA evidence must be balanced against potential damage to the innocent: “We don’t want to be putting the DNA of uncharged people into a federal database. It really boils down to, when you’ve got a charged case

you’ve met a certain threshold . . . you’ve got a real need to have that evidence in court.” This policy is partly responsible for Seattle’s 22 percent testing rate: only 365 kits were tested of the 1641 booked into evidence.

What the funding will achieve

New York, the first large city to work to end its own rape kit backlog, saw 2000 DNA matches and 200 cold case prosecutions after it cleared its 17,000 rape kit backlog. Today, testing in New York begins within a few days after a completed kit arrives at the crime lab, and the average turnaround time is 60 days. This has led to an increase in the arrest rate  for rape from 40 to 70 percent. Other cities, like Cleveland and Memphis, have similar success stories.

The $80 million awarded recently will help add more success stories to the list, and to put more rapists behind bars. However, until all cases of rape are seen as worthy of prosecuting, and all victims deemed worthy of justice, the number of rape convictions will remain appallingly low. Testing every rape kit as a matter of course would send the message that all victims matter. But right now, only a handful of states have state-wide laws requiring police to track, count and test rape kit evidence. Most states have no laws at all, and do not even know the extent of their rape kit backlog.

The $80 million directed toward the rape kit backlog is a statement, and a powerful one. It is the biggest award to date in reducing the backlog of untested rape kits. Perhaps it will finally send the message to victims of sexual assault that their ordeal matters, no matter who they are or how they were dressed or who their assailant was. But it is just the beginning. There is much more work to be done.