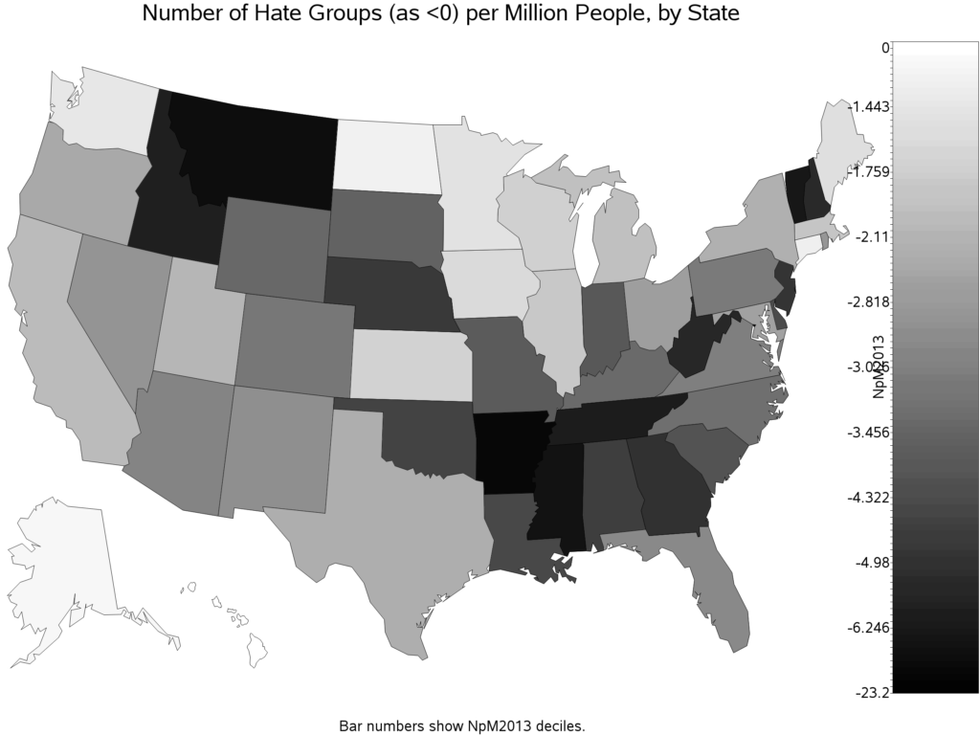 The Southern Poverty Law Center, an Alabama-based non-profit activist group, released its updated map of hate groups operating in the United States this month. The number of hate groups is on the rise from last year’s 892, at 917. But not all agree with the SPLC’s characterizations.

According to its website, the SPLC compiles the map using hate group publications and websites, citizen and law enforcement reports, field sources and news reports. Ryan Lenz, a senior investigative reporter for the SPLC’s Hatewatch project explained: “Over the course of a year, we have a team of investigators that scours the internet for racist publications and real world activities to find out which groups exist, [and] which groups are still active.”

The number of hate groups—defined by the SPLC as groups that have beliefs or practices that attack or malign an entire class of people, typically for their immutable characteristics—has been on the rise in recent years. However, the numbers are down from their peak between 2010 and 2012, shortly after President Obama assumed office.

The SPLC attributes the rise in hate groups over the past two years “in part due to a presidential campaign that flirted heavily with extremist ideas.” In particular, anti-Muslim hate groups have been on the rise—up 197 percent from 2015.

The SPLC map is not without its detractors. Critics on both sides, but particularly on the right, object to the characterization of some of the organizations as hate groups. One of the named groups, the Family Research Council, lambasted the SPLC, calling it “a fraud” and saying “nobody should treat them as responsible actors.”

The FRC describes itself as a “Christian public policy ministry in Washington, D.C. defending religious liberty, the unborn and families.” The SPLC calls it an anti-LGBT organization, citing the FRC’s website, which states: “Family Research Council believes that homosexual conduct is harmful to the persons who engage in it and to society at large, and can never be affirmed. It is by definition unnatural, and as such is associated with negative physical and psychological health effects.”

Tony Perkins, head of the FRC, said the SPLC was “not a neutral arbiter. . . .  They are pushing an agenda and anyone who opposes them – they slap a label on them. They are inciting violence and it needs to stop.”

The Family Research Council was attacked by a lone gunman in 2012 after its organization made SPLC’s list. The shooter, Floyd Lee Corkins, II, targeted FRC because of its views, including its advocacy against the recognition of gay marriage.

Brad Dacus, President of the Pacific Justice Institute, a legal defense organization that specializes in defending religious freedom, was also shocked to see his organization on the list. “Why is the Southern Poverty Law Center doing this? It’s simple. They want to vilify and isolate anyone that doesn’t agree with their very extremist leftist policy and ideology. This isn’t about defending civil rights; this is about attacking civil rights.”

SPLC describes the organization as an anti-LGBT hate group.

The largest number of hate groups are found in California, with 79. Florida comes in second at 63. You can explore the map here.