Quantum Teleportation May Be the Key to Secure Communications 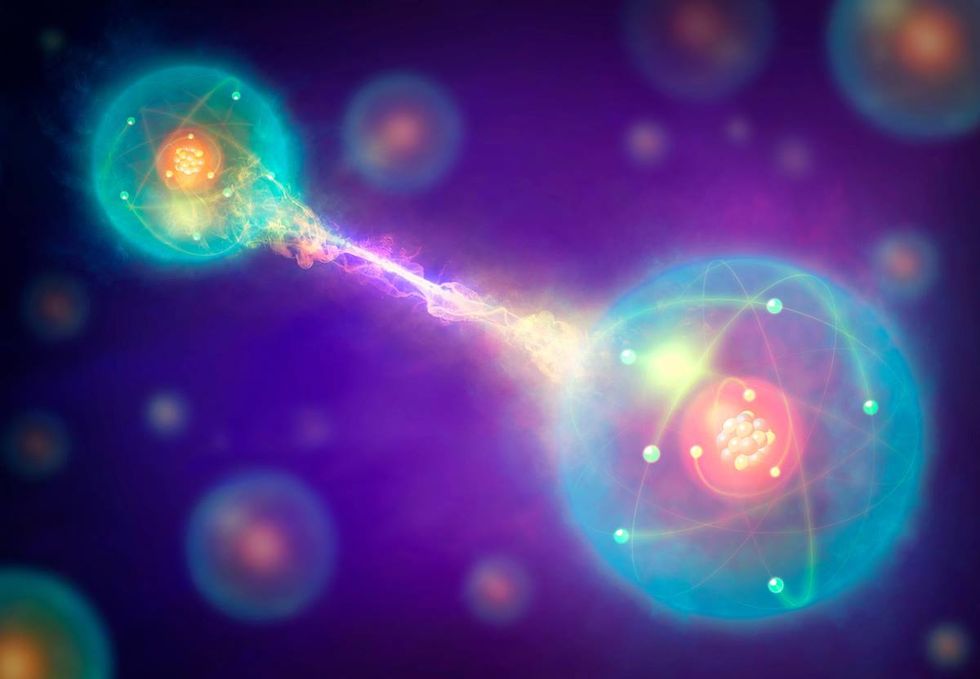 Quantum mechanics, also called quantum physics and quantum theory, is the branch of science responsible for explaining how nature works at the subatomic level. Though it is incompatible with the Theory of Relativity, which explains the relationships between space-time, matter, energy, and gravity, quantum mechanics is the most successful theory humans have of how the subatomic universe functions.

The most mysterious and least understood principle of quantum mechanics is a phenomenon called quantum entanglement. Quantum entanglement involves two particles that are linked, so when the state of one particle is measured, the state of the other changes. The change occurs instantaneously, no matter how far apart the particles are from each other in space, even if they are at opposite ends of the Universe. This seems to defy the very basic laws of physics, which state that nothing can travel faster than light.

Albert Einstein referred to quantum entanglement as “spooky action at a distance,” and it bothered him greatly. Furthermore, the state of either particle, or “spin,” is not determined until the particle is observed. This strange behavior is known as non-locality, and it implies that reality does not exist until it is observed. These concepts are mind-bending and will be discussed later in this piece. But they have real-world applications with which scientists are experimenting.

One such application is quantum teleportation, which is the transfer of information between entangled particles. Particles, such as photons, become entangled when a beam of light is split by a prism. Each photon automatically carries the opposite polarization, or “spin,” of the other, due to the law of conservation of momentum. Quantum teleportation, though still in its experimental infancy, has the potential to provide secure, unhackable cyber-security and communication. Seemingly stolen from an episode of ‘Star Trek,’ physicists have for the first time sent information between entangled particles under water.

In an experiment at Shanghai Jiao Tong University, Professor Xianmin Jin and his team of physicists filled a 3-meter long tank with seawater collected from the Yellow Sea. The team shot a beam of light through a crystal, creating a pair of entangled photons. The pair of photons were fired into opposite ends of the tank, where their quantum link, and related spins, were maintained 98 percent of the time. Because water scatters light, and photons are particles of light, this is a significant achievement. The team estimates that with current capability, communication between entangled photons could occur at a distance up to 900 meters. Underwater quantum teleportation has the potential to provide secure communication channels. For example, submarines in the future could send secure information without having to surface, using seawater as an additional layer of security. The limited distance quantum information can be sent underwater, however, represents a challenge for this technology to ever have a practical application.

The first successful test of quantum teleportation outside of a lab occurred in 2016. Independent teams in Calgary, Canada and Hefei, China, successfully transmitted quantum information across more than 7 kilometers of a fiber optic network. Though limited to only 17 photons of information per minute, the experiments proved that it is indeed possible to send naturally-encrypted, unhackable information without the information having to travel through physical space. Because quantum information does not need to travel through space, it cannot be hacked or intercepted. The only way to retrieve a message is a unique key at either end of the transmission. This is due to the very nature of quantum entanglement; if a hacker were to attempt to intercept either entangled photon, the state of each would reverse, instantly, preventing any outside interference.

Indeed, this is very complex and strange stuff. To understand why this type of communication is possible in the first place, we must challenge our very perception of reality.

REALITY IS NOT WHAT YOU THINK IT IS

Quantum entanglement is an accepted phenomenon of nature and can be observed and replicated in labs and in the real world, as discussed previously. If information can be shared instantaneously across vast distances, even between opposite ends of the Universe, could it be that our very notion of reality is wrong? After all, nothing can travel faster than light, which is the universal speed limit of ~300,000 kilometers per second.

In 1801, English physicist Thomas Young performed the Double-Slit Experiment, in which he proved that light is both a particle and a wave. Young discovered that when light waves are observed, they behave as particles, which we call photons. In a sense, photons only exist if there is someone there to observe them. In 1965, American physicist Richard Feynman proposed that electrons, the negatively-charged, smallest subatomic unit, also behave as a wave and a particle. In a 1998 experiment, scientists at the Weitzmann Institute replicated Thomas Young’s test, but with electrons instead of photons. What they found was completely, and totally, insane.

Electrons, like photons, only exist as particles if someone, or something, is observing them. Even stranger, the amount of wave interference decreased as the strength of the observation increased. Therefore, at its most basic level, reality only exists to the degree with which it is measured. Put another way, electrons simply exist as potentially real, until they are observed.

Even more amazingly, in 1964, physicist John Bell proved that particles exist in a “superposition of uncertainty” until they are observed. This should be considered one of, if not the most important scientific discovery of all time; that reality does not exist until it is observed. The observed spins of entangled particles occur randomly, yet two entangled particles will instantaneously have opposite spins, no matter how far apart they are, even though the spins are not predetermined (this is known as a superposition of uncertainty). This seems to defy all logic and known laws of physics, as well as how we observe matter to behave on a macro scale.

So, what does this have to do with quantum teleportation? Everything. If time and distance are unnecessary to transmit information, could our perception of reality be wrong? To put it simply, yes. Before we go on, I must preface that the following is heavily philosophical, and I encourage you, the observer, to draw your own conclusions.

THE UNIVERSE IS PROBABLY A SIMULATION

First introduced in 2003 by Oxford Professor Nick Bostrom, Simulation Theory states that “reality” is, in fact, nothing more than a sophisticated computer program. It may seem crazy, but many physicists and technocrats are taking it seriously. Elon Musk, the billionaire founder of Tesla and Space-X, stated in 2016 that “there is only a one in billions chance that we are not living in a simulation.” At the 2016 Isaac Asimov Memorial Debate, famed astrophysicist Neil deGrasse Tyson hosted a panel that debated whether reality is, in fact, simulated. For example, among the panelists is James Gates, a professor of theoretical physics at the University of Maryland. Professor Gates, who studies headache-inducing supersymmetry, string theory, and quantum gravity, claims that the laws of physics contain the same error-correcting codes that are used in web browsers.

Quantum entanglement makes sense if the Universe is a simulation. In a simulation, everything is equidistant from the point source of the simulation, thus, time and distance are nothing more than an illusion. This concept is not foreign to people who play RPGs such as Halo or Grand Theft Auto; the digitized world doesn’t take up physical space, but from the character’s perspective, the environment contains depth, time, and other people.

To take it one step further (just for fun), this principle can be applied to any character in a game, even the ones who seem to not have an active role. In other words, their simulated reality is as real to them as ours is to us, and they have no idea that their world is nothing more than a program… for now. In the SIMs, characters can play a version of SIMs inside the game. If we can create realistic simulations inside of simulations, it stands to reason that a sufficiently advanced technological civilization, using quantum computers, could simulate an entire universe with ease. Quantum computers run on the principles of entanglement and superpositions of photons, rather than bits of 0 and 1, yielding, in theory, nearly limitless processing power.

Additionally, the Universe has finite resolution, like pixels on a screen. This is called quantization, and it suggests that reality could be a simulation. The smallest possible distance is known as the Planck length, or 1.6 x 10-35 meters. That’s 100 million million million times smaller than a proton. Time is quantized too. The smallest possible unit of time is Planck time, or 5.39 x 10-44 seconds. How small is that? Simply put, there are more Planck times in one second than there have been seconds since the Big Bang. (It’s okay to pause here for a second). Planck distance and Planck time could be no more than the minimum resolution of a highly advanced super quantum computer. Furthermore, the speed of light could be nothing more than a limit to processing power, which explains why time stops at the speed of light. It’s simply a matter of processing capability.

It could very well be impossible to prove the Universe is a simulation, as any evidence would itself be simulated, and leaving the simulation would also be impossible. Conversely, proving the Universe is not a simulation is probably impossible too. But it’s fun to think about, and if artificial reality can be developed to be indistinguishable from physical reality, why wouldn’t we want to live in a simulation? Could it be that simulated realities are the next natural step in technological evolution? After all, it seems silly to venture to the stars when computer simulations can provide the same immersive experience without the risk of harm. Perhaps this is why the Universe is seemingly empty, as advanced civilizations may choose to venture inward, rather than out into space. Considering the amount of time people spend online, immersed in digital mediums, and playing video games, the idea that simulated realities are the norm doesn’t seem so farfetched.