A little less than 11 light years from our solar system, in the constellation Virgo, lives a red dwarf star called Ross 128. But orbiting this faint solar neighbor is the closest potentially habitable Earth-like planet astronomers have ever detected, called Ross 128 b. 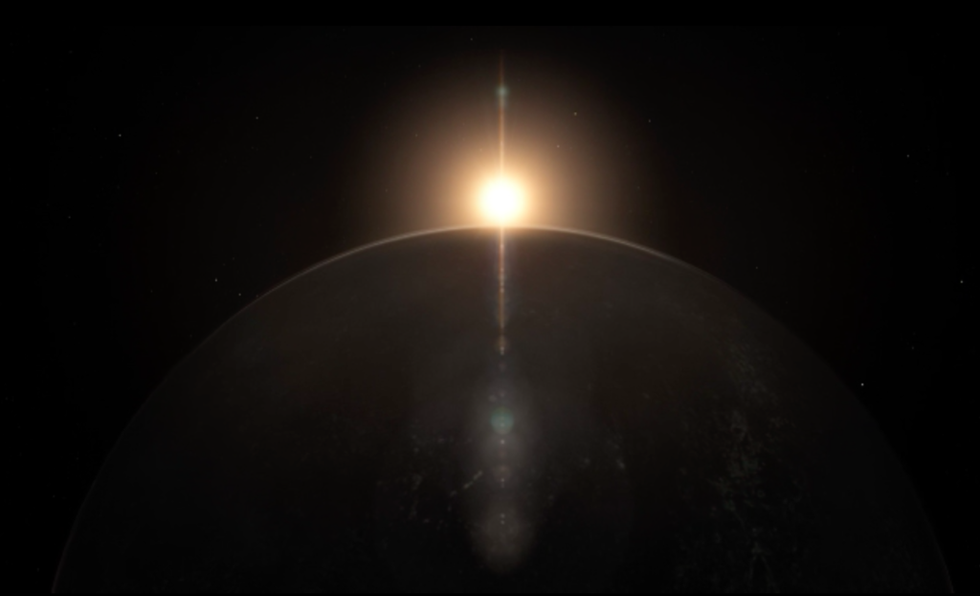 A little less than 11 light years from our solar system, in the constellation Virgo, lives a red dwarf star called Ross 128. There’s nothing inherently special about Ross 128; it’s a typical red dwarf star, one of the hundreds of billions throughout the Milky Way. But orbiting this faint solar neighbor is the closest potentially habitable Earth-like planet astronomers have ever detected, called Ross 128 b.

The nearest Earth-like exoplanet to us, Proxima b, orbits Proxima Centauri less than four light years away, but because of Proxima Centauri’s young age and frequent bursts of radiation, it is not believed to be habitable. Proxima Centauri is a red dwarf and is the Sun’s closest known stellar neighbor. Ross 128 is currently drifting toward our solar system, and in about 79,000 years, it will become our nearest celestial neighbor.

Humanity is living in the golden age of exoplanet discovery. Exoplanets are planets that orbit stars other than the Sun, and since 51 Pegasi B, the first exoplanet orbiting a Sun-like star was detected in 1995, astronomers have found thousands throughout the Milky Way.

“It’s not the only potentially habitable planet we’ve detected this year—just the closest one. It’s been a fantastic year for finding planets,” said Xavier Bonfils, leader of the Université Grenoble Alps team that made the discovery.

Indeed, it has been; 162 exoplanets were found in 2017 alone (so far), although none have yet been confirmed to be able to harbor life. The research is published in the Journal of Astronomy and Astrophysics.

The exoplanet, which has been designated Ross 128 b, is 1.35 times the mass of the Earth and orbits its star at only 5 million kilometers, or 20 times closer than Earth is to the Sun. Ross 128 b’s proximity means it receives 1.38 times more energy from its star than Earth does from the Sun, even though Ross 128 is 280 times less luminous than the Sun. Red dwarf stars, like Ross 128, are much smaller and far less luminous than stars like the Sun.

These characteristics place the “habitable zone,” an orbital region where liquid water could exist on the surface of a planet, of Ross 128 much closer to the star than the Sun’s. According to Bonfils and his team, Ross 128 b likely lies in the “inner edge” of its star’s habitable zone. Ross 128 b whips around its star in just 9.9 days.

The age of the system is also promising for potential habitability of Ross 128 b; at nearly 7 billion years old, the planet’s rotation has had plenty of time to slow down and stabilize, making the prospect of habitability more promising. A slow, stable rotation means Ross 128 b could have a temperate climate and cyclical seasons, like Earth. Life on Earth appeared around 3.9 billion years ago, and Ross 128 b has had nearly twice the amount of time for life to potentially evolve. Given its age and the fact that Ross 128 is magnetically quiet and doesn’t erupt with frequent flares, Ross 128 b is an auspicious place to look for life.

Just because Ross 128 b is Earth-like, however, does not necessarily mean it is habitable. Venus and Mars are technically both Earth-like, due to their composition, mass, and distances from the Sun. Like Earth, both planets lie within the Sun’s habitable zone and have rocky surfaces. In fact, billions of years ago, Mars had liquid water flowing on its surface. Of course, today, Venus is a 900-degree Hell with a crushing atmosphere and sulfuric acid rain, and Mars is a cold, sterile desert. Determining the habitability of Ross 128 b and other exoplanets requires analyses of their atmospheres, which will be the mission of the James Webb Space Telescope once it launches into space in 2019. Webb will scan the infrared spectrum of exoplanets, enabling it to determine their atmospheric compositions.

Astronomers can’t actually “see” Ross 128 b, so how was it found?

Ross 128 b was detected by the High Accuracy Radial velocity Planet Searcher (HARPS). Because Ross 128 b doesn’t pass directly in front of its parent star relative to Earth’s line of sight, Bonfils and his team of astronomers at the European Southern Observatory in Chile charted tiny wobbles in the rotation of red dwarf Ross 128. HARPS measures the small gravitational tugging of a star by an orbiting planet.

According to Bonfils, “there wasn’t a ‘eureka’ moment here where we were able to suddenly say, wow, we have a planet.” The gravitational tugging of a star by a planet is extremely small, and the team “accumulated data over many years, and only gradually the signal built up and became significant,” Bonfils added. Based on the gravitational interaction, the mass and orbit of Ross 128 was inferred. Measuring the tiny pull of a planet’s gravity on its star is an effective way of locating exoplanets that don’t cross our plane of view.

Exoplanets that lie within our line of sight, however, are found through a process called the transit method. When a planet passes in front of its star as it orbits, the star’s light dims, albeit very slightly. The amount of dimming depends on the size of the planet. The Kepler Space Telescope has identified 2,237 exoplanets since 2009, mostly using the transit method (30 of these worlds are within their stars habitable zones). Observations by Kepler in 2014 confirmed that Ross 128 b does not transit its parent star. By measuring how much starlight dims and the amount of time the planet takes to transit, Kepler can determine the planet’s orbit and mass.

“When a planet crosses in front of its star as viewed by an observer, the event is called a transit. Transits by terrestrial planets produce a small change in a star's brightness of about 1/10,000 (100 parts per million, ppm), lasting for 2 to 16 hours. This change must be absolutely periodic if it is caused by a planet. In addition, all transits produced by the same planet must be of the same change in brightness and last the same amount of time, thus providing a highly repeatable signal and robust detection method,” NASA explains.

Ross 128 sits in the constellation of Virgo and appears at the center of this picture. (Davide De Martin/Digitized Sky Survey)

Once it is launched, the James Webb Space Telescope will look for signs of life, such as an abundance of oxygen, by analyzing the atmospheres of planets transiting their stars. “The low stellar activity and moderate distance from Earth make Ross 128 b a good target for biomarker searches with forthcoming telescopes,” Bonfils’s report states. It’s important to note that planets are hundreds to millions of times smaller than their host stars (a million Earths would fit inside the Sun). Thus, identifying exoplanets using the transit method is like trying to spot a fly passing in front of a searchlight a mile away, though because red dwarfs are small, the transits are a bit more apparent.

Red dwarfs, classified by astronomers as K and M dwarfs, are the most common type of star in the Universe, vastly outnumbering yellow dwarfs like the Sun and giant stars like Betelgeuse and Eta Carinae.

Three quarters of the Milky Way’sstars are red dwarfs, and though too small and faint to be seen with the unaided eye, red dwarfs can be observed with the assistance of powerful space-based telescopes like Hubble and Kepler. In fact, most of the Sun’s nearest neighbors are red dwarfs. Their strength in numbers alone means it’s likely red dwarfs could be the most common place in the Universe to host habitable words.

Like all other stars, Ross 128 and other red dwarfs generate their power by fusing hydrogen into helium. Due to their small size, however, fusion occurs in every layer of a red dwarf, not just in their cores. Their low gravity (relative to larger stars) allows for convection patterns that evenly distribute hydrogen fuel throughout the entire star. This means that red dwarfs burn through their hydrogen slowly and 100 percent efficiently. Not only are red dwarfs the oldest stars in the Universe, they have the longest life spans. Red dwarf stars will shine for trillions of years; they will be the last stars to burn out when the Universe’s stelliferous era, or star formation era, ends in roughly 100 trillion years.

Given these long lives, life could have many more opportunities to evolve on planets orbiting red dwarfs. In February 2017, for example, Kepler identified a whopping seven Earth-like planets within the habitable zone of red dwarf Trappist-1. Like Ross 128, the Trappist-1 system is nearly twice the age of our solar system.