Farewell, Cassini-Huygens: Some Highlights From Its 13 Years In Saturn's Orbit

Cassini-Huygens is humanity’s first in-depth study of Saturn and its system of rings and moons. Its journey has come to a close. 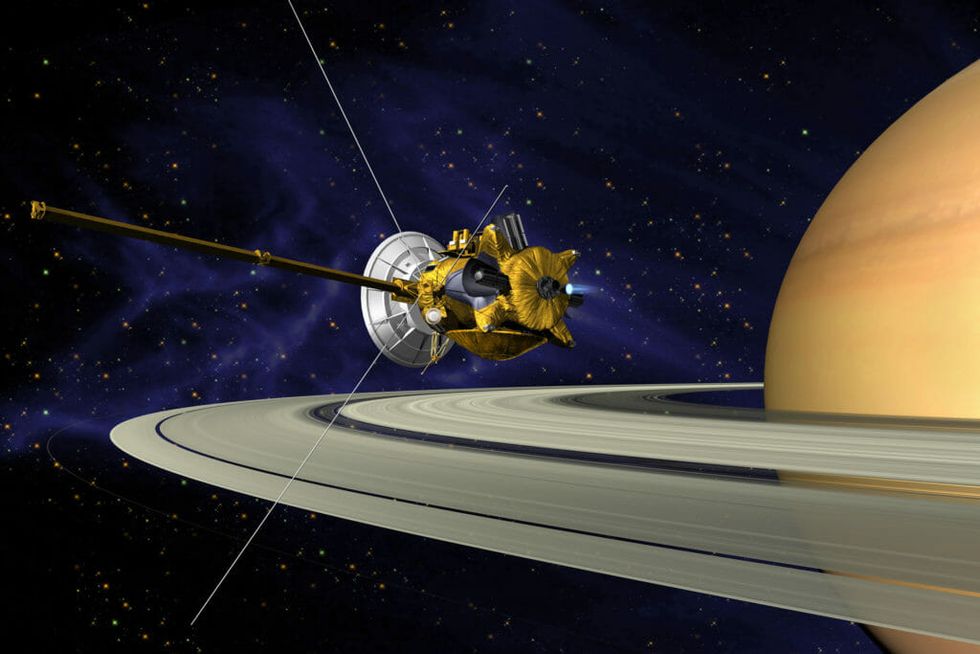 Cassini-Huygens, launched in 1997, was a joint mission between NASA, the European Space Agency (ESA), and the Italian Space Agency, ASI (Agenzia Spaziale Italiana). Cassini-Huygens is humanity’s first in-depth study of Saturn and its system of rings and moons. Its seven-year-long journey to Saturn included two gravity-assist fly-bys of Venus. Spacecraft use gravity-assists to increase their velocity.

Having exhausted its fuel supply, and to eliminate any chance of crashing into and contaminating potentially life-containing worlds, Cassini dove into Saturn on the morning of September 15th, to send data back to Earth until it finally disintegrates in Saturn’s atmosphere.

As it ventured into the outer solar system, Cassini-Huygens provided the most high-resolution photos of Jupiter to date. After arriving at the Saturnian system in 2004 and completing its initial survey of Saturn in 2008, Cassini would undergo two mission extensions. Cassini sent back a trove of data on Saturnian weather, and, most notably, two of Saturn’s moons, Enceladus and Titan. Because of Cassini, Enceladus and Titan are now considered to be prime candidates for harboring extraterrestrial life.

Saturn, its famous rings, and 61 known moons orbit the Sun at nearly 900 million miles, approximately ten times the average distance between the Sun and Earth. With a diameter of 72,367 miles, Saturn is made mostly of hydrogen, yet it could float on water (in a tank large enough of course) due to its low density.

Because Saturn is so far from the Sun, most of its heat comes from inside the planet. The core temperature on Saturn is 22,000 degrees Fahrenheit, nearly three times hotter than the surface of the Sun. Like Jupiter, Saturn has a nickel-iron core surrounded by liquid metallic hydrogen, a fluid created when gaseous hydrogen is under enough pressure be in a liquid state. Saturn rotates rapidly; a day on Saturn lasts only ten and a half Earth hours. Cassini observed storms in Saturn’s atmosphere, which contains the second-fastest winds in the solar system. These winds are caused by Saturn’s fast rotation and from heat coming from the planet’s interior, resulting in bands of different colors and wind speeds. In 2004, Cassini photographed two atmospheric storms merging into one. Some storms are as big as or larger than Earth. In fact, 764 earths could fit inside Saturn. Cassini also observed lightning strikes thousands of times more powerful than on Earth.

At Saturn’s north pole churns a unique, hexagon-shaped storm. Though first observed by Voyager, Cassini documented the storm in unprecedented detail. The polar storm resembles a hurricane, though the differences are vast; the eye alone is 1,250 miles in diameter, and wind speeds exceed 220 miles per hour. Amazingly, the eye of the storm descends at least as far into Saturn as Cassini can see.

Cassini helped to unlock the mysteries behind Saturn’s majestic system of rings. Saturn’s rings are composed of ice particles and chunks of rock, ranging in size from grains of sand to mountains. “The rings are believed to be pieces of comets, asteroids, or shattered moons that broke up before they reached the planet,” NASA states. Although they stretch out 175,000 miles from Saturn, the planet’s rings are remarkably thin. Their depth ranges from 33 feet to around 3,200 feet.

Cassini observed small moons embedded within the rings, whose gravity pushes ring particles apart. This causes propeller-shaped gaps to form inside the rings. In general, Saturn’s rings sit closely to one another. Separating rings B and A, however, is a 2,920-mile-wide gap called the Cassini Division. It was discovered by 17th-century astronomer Giovanni Cassini, after whom the spacecraft is named. The Cassini Division’s empty space is maintained by Mimas, a small moon orbiting Saturn within its rings. Cassini also discovered that eruptions from Enceladus are largely responsible for forming Saturn’s E-ring. Images of Saturn’s rings provided by Cassini can be found here.

Enceladus, a 300-mile-wide ice-covered moon of Saturn, is where Cassini made its most profound discoveries. According to readings from Cassini, Enceladus has a global ocean underneath a solid water-ice crust. Water-ice ejected from Enceladus’ ice geysers analyzed by Cassini contains salt and organic compounds, the presence of which makes Enceladus a potential home for extraterrestrial life. Tidal forces between Enceladus and Saturn generate heat in the moon’s core, which enable the global ocean to remain liquid. Enceladus may even have hydrothermal vents at the bottom of its ocean. If so, they could deliver nutrients and energy for living organisms, just as hydrothermal vents do on Earth. Cassini captured unprecedented images of Enceladus and its geysers during its mission.

Astronomer Christiaan Huygens discovered Titan in 1655. Titan was Saturn’s first known moon. The Huygens probe, named after Christiaan Huygens, landed on Titan, Saturn’s largest moon, in 2005. Huygens is the first, and only, human-made object to land in the outer solar system. Landing Huygens on the tiny moon 800 million miles from Earth was “a profoundly moving and historic technological achievement,” said Carolyn Porco, leader of the Cassini Imaging Team, in an interview with Sen.

Titan is 50% larger than Earth’s moon. Huygens revealed Titan as very Earth-like, due to its nitrogen-rich atmosphere and its ability to sustain liquids on its surface. On Titan, the surface temperature is an average negative 300 degrees Fahrenheit; lakes and rivers contain liquid methane, and bedrock is made of rock-solid water ice. With Earth being the exception, Titan is the only body in the solar system with liquid on its surface. Titan owes this to its dense atmosphere, which generates enough pressure for liquid natural gas to flow on its surface. Liquid methane evaporates into Titan’s atmosphere, forming liquid natural gas precipitation. Moreover, Huygens found that Titan has a fog of methane ice and cyanide gas, which floats just above the moon’s surface.

Additional measurements showed that the concentration of hydrogen in Titan’s atmosphere decreases closer to the ground, leading to theories that Titan may have living organisms that consume hydrogen as food. NASA astrophysicist Christopher McKay believes this to be the case. “We suggested hydrogen consumption because it's the obvious gas for life to consume on Titan, similar to the way we consume oxygen on Earth. If these signs do turn out to be a sign of life, it would be doubly exciting because it would represent a second form of life independent from water-based life on Earth," he theorizes. Methane-based life remains hypothetical, however. Huygens captured images of Titan during its 2005 landing. Prior to the landing of Huygens, astronomers were unable to see through the thick orange haze of Titan’s atmosphere. Huygens’ exploration of Titan lasted an hour and a half.

Cassini’s Grand Finale involves 22 orbital dips between Saturn and its inner-most ring and a final fly-by of Titan. Cassini’s findings have shown the Saturnian system to be a living, diverse and complex place, and will hopefully lead to future missions to the ringed planet. For example, Saturn’s atmosphere contains an abundance of Helium-3, an isotope of helium that, through fusion, could power future spacecraft. Helium-3 is not radioactive and does not produce dangerous waste, making it a safe form of energy. The abundance of He-3 could lead to missions that involve mining Saturn’s atmosphere to power interstellar voyages. Though it also exists on the Moon, Helium-3 is extremely rare on Earth and cannot be produced in a lab with current technology.

Cassini may have been the first spacecraft to orbit Saturn, but it certainly won’t be the last.