A New Machine Can Suck Carbon Dioxide Directly from the Air 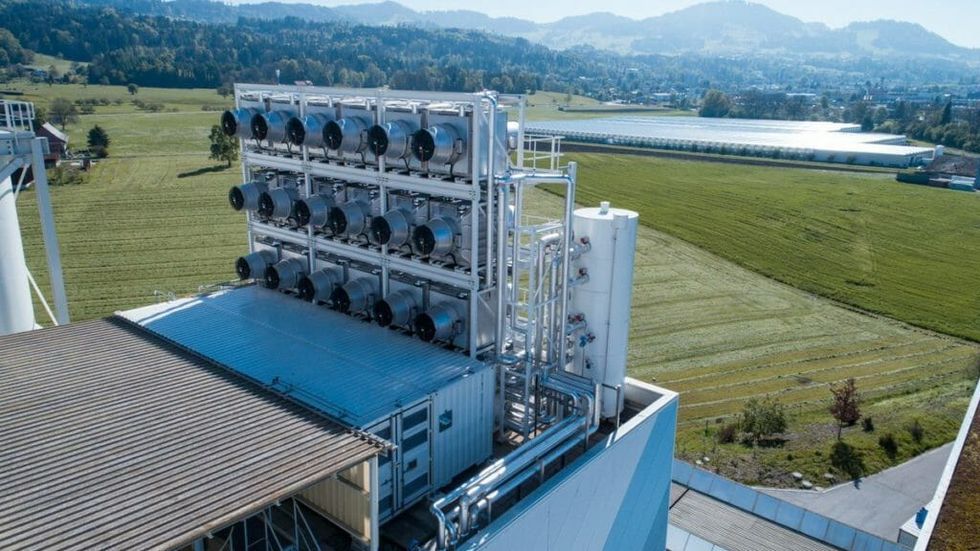 Climate scientists have been ringing alarm bells for decades begging us to keep the planet from warming another two degrees Celsius, after which point, change may become irreversible. Thanks to human enterprises that use fossil fuels—driving, flying, shipping, burning, manufacturing, etc—we’re already pumping so much carbon dioxide (CO2) into the atmosphere that the planet has been steadily warming to dangerous levels. In fact, CO2 comprises 82% of the greenhouse gases the U.S. produces.

Carbon Capture From the Air

Many renewable energy companies have tried to approach this through the private sector. Carbon capture is a burgeoning area of green innovation. A company in Switzerland called Climeworks has a bold new approach: sucking carbon straight out of the air and then reusing it to help farmers grow vegetables and for use in other industries. CO2 is especially valuable as an agricultural fertilizer for its ability to increase the growth of veggies like tomatoes and cucumbers.

Climeworks opened their first commercial plant of this kind in June 2017 in Zurich, Switzerland. They are the first to capture industrial levels of CO2 from the air, close to 900 tons of it every year, say its co-founders—or about as much as 200 cars produce. From there they plan to pipe that gas directly to vegetable farms and capture it for other industries such as commercial agriculture, food and beverage industries, the energy sector and the automotive industry.

While 900 tons sounds like a lot, Climeworksacknowledges that in order to make a significant difference, they’d need approximately 250,000 similar plants capturing the same or more CO2. However, it is a necessary first step in the goal to capture one percent of the world’s global CO2 emissions.

"Highly scalable negative emission technologies are crucial if we are to stay below the two-degree target [for global temperature rise] of the international community,"said Christoph Gebald, co-founder and managing director of Climeworks.

Currently they’ve installed 18 collectors, as the units are called, on the roof of a waste utilization plant. “The fans on the outside serve to suck in the ambient air,” Christoph Gebald, co-founder and managing director, said. When the filter has taken in all the CO2 it can hold, the gas is separated by a heating process above 100 degree Celsius. From there, the gas travels by underground pipeline to a greenhouse run by Gebruder Meier Primanatura AG to grow vegetables.

The co-founders intend their plant to run as a three-year demonstration project that will prove the viability of such a project. They’re also investigating other forms of carbon capture such as burying gas underground.

“With the energy and economic data from the plant, we can make reliable calculations for other, larger projects,”said co-founder Jan Wurzbacher.

This is not the first time carbon capture has been attempted. AnIndian plant in the industrial port of Tuticorin has been capturing CO2 from its coal-powered boiler and transforming it into baking soda with very few emissions into the air or water.

They claim that they will be able to extract 60,000 tons of CO2 each year. However the firm’s managing director, Ramachandran Gopalan, makes no claim to be doing it for the good of the environment. Gopalan acknowledged “I am a businessman. I never thought about saving the planet. I needed a reliable stream of CO2, and this was the best way of getting it.” Still, if it proves profitable, other companies might follow suit.

As corn gets converted to ethanol, the plant strips carbon dioxide out of the fermentation process, yielding nearly pure carbon dioxide gas that would normally have gone into the atmosphere. After they capture the gas, they convert it to a fluid form and put it underground in sandstone layers that are a mile and a half deep.They estimate that they’ll be able to store1.1 million tons of CO2 per year for five years, totaling over 5 million tons, with the capacity for storing billions of tons over time.

Is it Really Sustainable?

While all of these carbon capture techniques are promising, critics argue that it can be quite costly to capture CO2 out of the air as Climeworks is doing. An MIT senior research engineer named Howard Herzogreferred to the technology as a “sideshow” during an event, and estimated that the system could cost as much as $1,000 per ton of CO2. That’s ten times as much as it costs to remove carbon from a fossil fuel plant, since carbon is fairly diffuse in the air, but concentrated in fossil fuel plants.

The National Academies of Sciences, Engineering and Medicine released a report in 2015 saying climate intervention technologies like air capture should not be treated as a viable substitute for reducing emissions because it is an “immature technology.” Committee chair Marcia McNutt, editor-in-chief of Science and former director of the U.S. Geological Surveysaid, “That scientists are even considering technological interventions should be a wake-up call that we need to do more now to reduce emissions, which is the most effective, least risky way to combat climate change,” said. She admitted, however, that time is short and innovations are needed, adding, “But the longer we wait, the more likely it will become that we will need to deploy some forms of carbon dioxide removal to avoid the worst impacts of climate change.”

Considering that Climeworks was a finalist in billionaire Richard Branson’s Virgin Earth Challenge, which came with a $25 million prize to the builder of a viable air capture design, not everyone is looking down upon carbon capture as an answer to climate change. In fact, the technology will likely only improve as more companies get into the game. More to the point, every little bit of help counts.