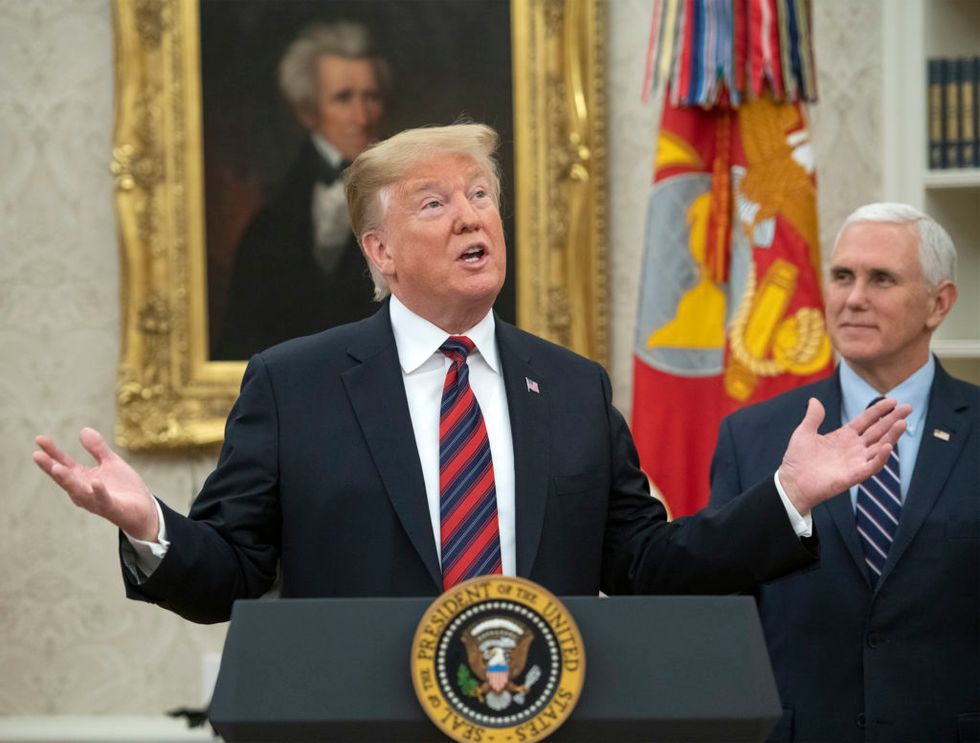 WASHINGTON, DC - JANUARY 19: U.S. President Donald Trump makes remarks as he hosts a naturalization ceremony in the Oval Office of the White House in Washington, DC on January 19, 2019. Looking on at right is Vice President Mike Pence. (Photo by Ron Sachs-Pool/Getty Images)

"Nobody has ever done so much in the first two years of a presidency as this administration," Donald Trump said at a Mississippi rally last year. Now we know that's true, but probably not in the way that he imagined. A report by Freedom House—a government funded democracy research organization—says "no president in living memory has shown less respect for its tenets, norms, and principles."

Trump has assailed essential institutions and traditions, including the separation of powers, a free press, an independent judiciary, the impartial delivery of justice, safeguards against corruption and most disturbingly, the legitimacy of elections.

The annual Freedom In The World report has called Trump out for, among other things, assailing the word of law, demonizing the press, and threatening American ideals abroad.

"There remains little question that President Trump exerts an influence on American politics that is straining our core values and testing the stability of our constitutional system," writes Freedom House president Mike Abramowitz.

Freedom and democracy around the world are in decline, says the report. "Just as we have called out foreign leaders for undermining democratic norms in their countries," Abramowitz says, "we must draw attention to the same sorts of warning signs in our own country."

These signs include our president openly disparaging press freedom, incarcerating and demonizing asylum seekers, and encouraging political divisiveness by pitting Republicans against Democrats.

"We recognize the right of freely elected presidents and lawmakers to set immigration policy, adopt different levels of regulation and taxation, and pursue other legitimate aims related to national security," says Abramowitz. "But they must do so according to rules designed to protect individual rights and ensure the long-term survival of the democratic system. There are no ends that justify nondemocratic means."

Freedom House said that democracy in the US has fallen far behind that of countries such as Germany and Britain. It… https://t.co/hG7YHPChvx
— Jason Lemon (@Jason Lemon) 1549376930.0

In last year's State of the Union address, President Trump said "no people on Earth are so fearless, or daring, or determined as Americans." Let's hope this is true, and that we can stop the erosion of our national freedoms.