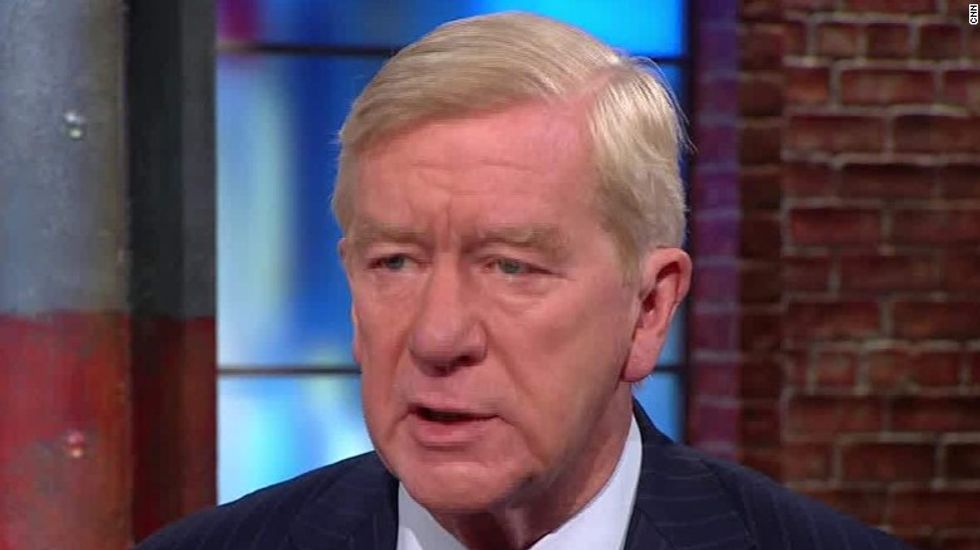 William Weld, the Libertarian vice presidential nominee, defended Hillary Clinton against attacks from Donald Trump in a brief interview with The New York Times. Weld made headlines last month after he announced that his plan for the remainder of the election was to deny Trump the White House, a strategic pivot that will give the former Republican the opportunity to rebuild the GOP in the aftermath.

“I’m sick and tired of seeing her dragged through the mud by a man who makes absolutely no demands on himself as to moral behavior, including common decency or truthfulness,” he said.

Weld's comments came the morning after an interview with Rachel Maddow on MSNBC in which he said he was "vouching" for Clinton as Maddow questioned him about the future of the Libertarian ticket. The Libertarian Party has struggled to secure the 5 percent of the vote that would classify the Libertarians as an official "minor party," attaining them matching federal funds and ballot access.

MADDOW: And when you—in the real world when you think about pursing that 5 percent option, for people who are in states where it’s really close, for people who are in North Carolina, Pennsylvania, Florida, Ohio, these states where the presidential race really might be decided among the two candidates who actually have a shot at it. Do you think that people in those states should vote for you?

WELD: Well, we are making our case that we’re fiscally responsible and socially inclusive and welcoming. And we think we’ve got on the merits the best ticket of the three parties, if you will, and so, you know, we’d like to get there. Having said that, as I think you’re aware, I see a big difference between the Republican candidate and the Democratic candidate. And I’ve been at some pains to say that I fear for the country if Mr. Trump should be elected. I think it’s a candidacy without any parallel that I can recall. It’s content-free and very much given to stirring up ambient resentment and even hatred. And I think it would be a threat to the conduct of our foreign policy and our position in the world at large.

Maddow circled back to the same question again shortly afterward.

MADDOW: ...Somebody listening to you right now in N.C.––knowing that N.C. may decide who the next president of the U.S. is––hearing you, in terms of what you think of Donald Trump and that you fear for the country if he is elected.  Why wouldn't it be––if those are the stakes, and that person is deciding well, I'm gonna vote against Donald Trump and you concede basically that you're not gonna win––that you and Gary Johnson are not gonna win the presidency. Why would that person not weigh threat to the country, fear for the fate of the country against hope the libertarian party gets its five percent this year. Why would a person pick the Libertarian vote in that case if the stakes are that high between voting for Clinton and Trump?

WELD: Well, the person could very well decide not to do that, and for someone deciding not to do that, I have a lot to say about Mrs. Clinton that has not been said by others recently and that I think needs to be said. I mean I've known her for 40 years.  I worked with her, I know her well professionally. I know her well personally. I know her to be a person of high moral character. A reliable person and an honest person, however Mr. Trump may rant and rave to the contrary. So I'm happy to say that. People can make their own choices.

MADDOW: I feel like you're butting up against a gossamer ceiling here -- a very, in that you're not getting -- you're not quitting, you're not stepping out of the race.  I heard you say today on MSNBC that you'll cast a vote for the Libertarian ticket, of which you are part.

WELD: That would be our ticket.

MADDOW: That would be your ticket. Your and Gary Johnson's ticket.  But do you honestly believe that Gary Johnson would be a better president than Hillary Clinton?

WELD: I think he'd be capable of being a good chief executive and yes a commander in chief––Aleppo to the contrary, notwithstanding. He was a strong governor and you know I believe in the platform of the Libertarian party, which is different from that of the other two parties and I believe that it would be good for the country if the Libertarians were––had a seat at the table to speak truth to power of the other two parties, which now have this monopoly in Washington. Having said that, I'm not taking back anything I said about the massive difference between the two establishment party candidates.  One would be chaos for the country, I think. And the other would be a very business-like and capable and competent approach to our affairs.

Maddow was quick to point out that critics have questioned Weld's loyalty to the Libertarians. At the time Weld announced he would focus exclusively on undermining Donald Trump, he insisted he was not abandoning Johnson.But Trump’s candidacy is an unparalleled threat that prompted him, as he wrote in a statement released last week, to step “out of the swirl of my campaign” and vigorously denounce him.

MADDOW:  I can’t imagine that you wouldn’t tell a person in North Carolina or Ohio to vote for Hillary Clinton if the choice they were making was between giving the Libertarian Party 5 percent or potentially electing Donald Trump because you guys don’t have a chance against Donald Trump and she does and if they vote for you, they would be helping to elect Donald Trump.  The Libertarian Party hasn’t treated you great if they’re putting out statements that you disagree with over your name even now, one week before the election I can’t imagine that your loyalty to them is stronger than your fear of Trump as a president.

WELD: Well I’m here vouching for Mrs. Clinton and I think it’s high time somebody did, and I’m doing it based on my personal experience with her and I think she deserves to have people vouch for her other than members of the Democratic National Committee, so I’m here to do that.

Weld's comments have continued to spark discussion over his loyalty to the Libertarians. In a statement released after Weld's open letter condemning Trump ignited a storm of media reports, Joe Hunter, the Communications Director for the Johnson-Weld campaign, insisted that "sensationalists and wishful thinkers are re-writing Gov. Weld’s forceful condemnation of Donald Trump into a suggestion that voters should support Hillary Clinton" and called their speculation "absurd."