Will the Supreme Court Halt the Decimation of Texas’s Abortion Clinics? 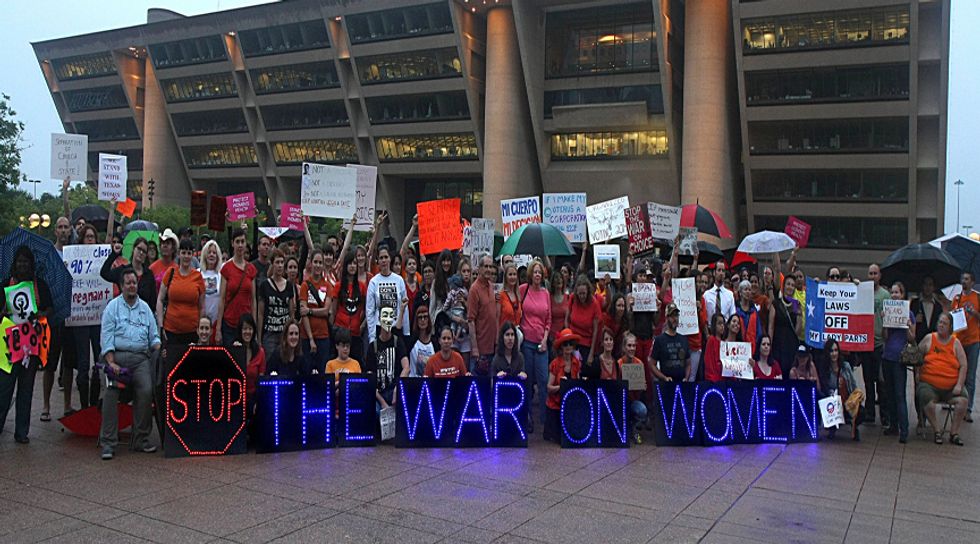 A woman’s right to an abortion could become much more difficult to exercise in Texas in the months to come. Seventy-five percent of the forty clinics spread throughout the state a mere two years ago will be shuttered if the Supreme Court denies the petition for certiorari filed earlier this month in Whole Women’s Health v. Lakey. This would leave a mere 10 clinics to service the second largest and second most populated state in the union. These clinics, which are clustered around the five metropolitan areas in Texas, would leave approximately 1 in 6 women of reproductive age in Texas over 150 miles from their nearest clinic.

The case is a result of Texas’s 2013 law House Bill 2, which would add a series of onerous and largely inapplicable restrictions on abortion clinics. Two of these restrictions are challenged in Whole Women’s Health.

First, the petition challenges the requirement that the physician performing the abortion have admitting privileges at a hospital within 30 miles from the clinic. While this provision purports to establish minimum standards of care, admitting privileges often have no bearing on a doctor’s competence. Many doctors who perform abortions have no formal hospital affiliation, ironically, because the procedure itself is so safe that these doctors rarely, if ever, need to admit their patients to a hospital. As a result, they often do not meet the hospitals’ minimum requirements for number of patients admitted or surgeries performed.

So a provision ostensibly drafted to promote women’s safety actually penalizes those doctors -- and the clinics -- for their exemplary safety records.

among other things, an operating room, designated storage space for general anesthesia, restricted access to surgical suites, and special ventilation, which are unnecessary for the vast majority of abortions.

These two restrictions alone would close more than 75 percent of Texas’s abortion clinics.

The Supreme Court’s Brushes with H.B. 2

The Supreme Court is no stranger to H.B. 2. The provision requiring admitting privileges was challenged separately in the 2013 case Planned Parenthood v. Abbott. The Supreme Court, in a 5-4 decision with Justice Kennedy as the swing vote, upheld the Fifth Circuit’s decision that resulted in the admitting privileges provision going into effect. As a result, roughly half of Texas’s abortion clinics were forced to close – down to 18 currently from 41 in 2012.

In 2014, the Court vacated a stay in Whole Women’s Health, which prevented the ASC provision from going into effect until the Fifth Circuit heard the case. After the Fifth Circuit reached its decision upholding the ASC provision, the Supreme Court issued a stay, allowing the clinics to stay open until the Court decided whether to hear the case on appeal. If the Court denies certiorari, the stay will lose effect and an additional eight clinics will close, leaving just ten.

Because of the Supreme Court’s active involvement in the case thus far, it is likely that it will accept the petition for certiorari, perhaps as early as November, and hear the case. If so, a decision may be reached by June 2016.

Fifth Circuit: If “Any Conceivable Rationale” Exists, the Statute Must Be Upheld

jurisdictions. Most circuits require that a law actually advance the state’s interest in promoting women’s health. The Fifth Circuit, in contrast, found that a law must be upheld if “any conceivable rationale exists for its enactment,” even if all medical evidence shows that it does not promote women’s health. Here, the Fifth Circuit found that the “conceivable rationale” test was met because the legislation’s stated purpose was to promote the health of the mother, despite all medical evidence to the contrary.

Here, the statute likely would not have the effect of furthering women’s health. The District Court agreed, pointing to “the dearth of credible evidence supporting the proposition that abortions performed in ambulatory surgical centers have better patient health outcomes compared to clinics licensed under the previous regime” in supporting its decision to find the statute unconstitutional.

An amicus brief filed by the American Medical Association and the American College of Obstetricians and Gynecologists further warned that the statute may actually impair women’s health: “[T]here is simply no medical basis for requiring that abortion facilities meet the standards for ambulatory surgical centers or for enforcing a local admitting privileges requirement against abortion providers. H.B. 2 does not serve the health of women in Texas but instead jeopardizes women’s health by restricting access to abortion providers.” (Another clue that women’s health may not be its primary concern lies in the short title of the statute regarding abortions performed after 20 weeks: the “Preborn Pain Act.”)

The statute would have the effect of seriously restricting access to abortion clinics for millions of Texas women. The admitting privileges requirement has already moved the average Texas County up to 111 miles from the nearest clinic, from 72 miles pre-H.B. 2. Close to a million women would have to travel over 150 miles, each way, for the abortion. If certiorari were denied, or if the Court hears the case and affirms the Fifth Circuit’s decision, only ten abortion clinics would be left to service the entire state of Texas. These clinics would be clustered in the major metropolitan areas of Dallas/Fort Worth, Austin, Houston and San Antonio.

Women throughout the state, not just those located in rural areas, would be impacted by the statute. With only ten clinics left to service the roughly 60,000 women who seek an abortion in Texas each year, wait times would increase dramatically – in some cases,

past the point where women may legally and safely obtain an abortion. (These clinics are currently servicing about 14,000 women.) And while abortion is deemed an extremely safe procedure, the chances of complications rises with gestational age.

Additionally, the cost of abortions would rise. Most of the clinics that would be forced to close perform abortions at lower rates than the average ASC, due in large part to the additional costs associated with being an ASC. Women in Texas could expect the typical in-state abortion to rise about 15 percent, to just over $700.

The Supreme Court’s decision to hear the case would have an impact far beyond Texas. H.B. 2 is merely one of the latest in a recent surge of anti-abortion legislation. In 2013 alone, 22 states enacted 70 anti-abortion measures, down slightly from the 92 enacted in 2012. More state abortion restrictions were enacted from 2011 to 2013 than in the entire preceding decade.

Among these, Mississippi, Louisiana, and 26 other states have also passed ASC or admitting privileges regulations, with more expected in upcoming legislative sessions. Mississippi’s law, which is also pending before the Supreme Court, would leave one clinic open in the entire state. Alabama’slaw, which was struck down by a federal district court, would leave only two.

With the 2016 elections in sight, it is unlikely that the pace of the anti-abortion legislation will slow down. If anything, the momentum is likely to increase as Republican candidates cater to their constituents on the right. If the Supreme Court issues its ruling on Whole Women’s Health in June 2016, as expected, it is likely that abortion will once again make its way to the front of the national debate, just in time for the election ramp-up.

In the meantime, Texas earns has a temporary reprieve as the Court considers whether to hear the case. Whether that reprieve will last is now in the hands of the Court.