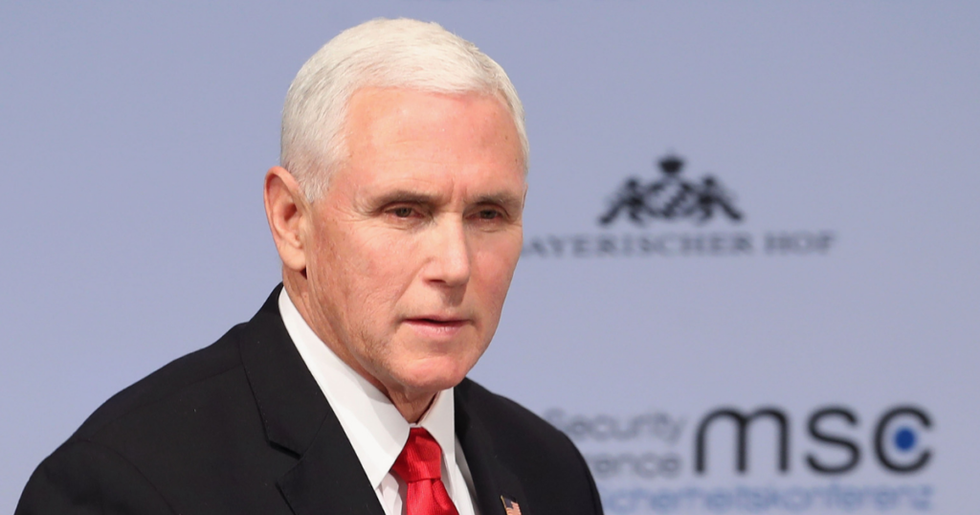 MUNICH, GERMANY - FEBRUARY 16: US vice president Michael Pence arrives for his speech during the 55th Munich Security Conference (MSC) on February 16, 2019 in Munich, Germany. The annual conference, which brings together political and defense leaders from across the globe, is taking place under heightened tensions between the USA, together with its western allies, and Russia. The MSC is the worldwide leading forum for debating international security policy. (Photo by Alexandra Beier/Getty Images)

The White House wants you to believe that Vice President Mike Pence received applause when he mentioned President Donald Trump at the Munich Security Conference on Saturday, but video of the event shows something entirely different.

“I bring greetings from the 45th President of the United States of America, President Donald Trump," Pence said in the televised speech.

The White House, however, embellished the vice president's words in its official transcript.

“To them and to all of you, it’s my great honor to speak to you today, on behalf of a champion of freedom and a champion of a strong national defense, the 45th President of the United States of America, President Donald Trump," the transcript reads.

Then they add for good measure:

As you can see from the video below, however, no one clapped.

Remember when Trump said at a rally in July: "what you're seeing and what you're reading is not what's happening?" Looks like the White House is running with it.

But the American people are smarter than that.

@jilevin Todays alternate reality is brought to you by the Ministry of Truth.
— Autumn Yatabe (@Autumn Yatabe) 1550597639.0

@jilevin Someone please explain to these people that video shows everything that happens
— Angel R Denis (@Angel R Denis) 1550623126.0

Note how Pence's expression shows that he was not expecting such a cold reception in response to greetings from Trump.

@jilevin I watched the clip and it was obvious to me that @VP was taken back by the silence, secondly any statement… https://t.co/6SvEWQj8Nh
— Lawrence Young (@Lawrence Young) 1550605921.0

This was Pence's "please clap" moment... just a little over three years to the day.

And it was the second time a European audience snubbed Pence during his trip.

At the Warsaw Ministerial Working Luncheon in Poland on Thursday, Pence received no applause after demanding that American allies in Europe withdraw from the Joint Comprehensive Plan of Action (JCPOA), better known as the Iran nuclear deal.

"The time has come for our European partners to withdraw from the Iran nuclear deal," Pence said to no response.

The transcript of Pence's Warsaw speech can be read here.

Pence used both speeches as an opportunity to lavish praise onto Trump.

"Under President Trump’s leadership, the United States is once again putting the security and prosperity of America first.  But as the past two years have shown, across the Middle East and across the wider world, “America First” does not mean America alone," Pence said in Warsaw.

"And in the Middle East," he added, "the United States is working to build, as the President said, 'a coalition of nations who share the aim of stamping out extremism and providing our children a hopeful future that does honor to God.'"

The vice president's remarks in Munich were strikingly similar but nevertheless largely ignored.

“And so, under President Donald Trump’s leadership, America is leading the free world once again,” Pence said. “Thank you for the honor of participating in this important event. And thank you for this opportunity to reflect on the progress that we’ve made and the ties that unite freedom-loving people everywhere."

The White House has been trying to spin accumulating international humiliation for a while.

Back in September, for example, the United Nations General Assembly laughed in Trump's face when he boasted about being the most productive president ever.

“In less than two years, my administration has accomplished more than almost any administration in the history of our country,” Trump said. “So true,” he added, which was promptly followed by laughter in the chamber.

“Didn’t expect that reaction, but that’s ok,” a visibly uncomfortable Trump then joked.

Trump later claimed the UN was "laughing with" him.