The White House Just Doubled Down on Donald Trump's Lie That Democrats Are Responsible For His Family Separation Policy, and Twitter Is Crying Foul 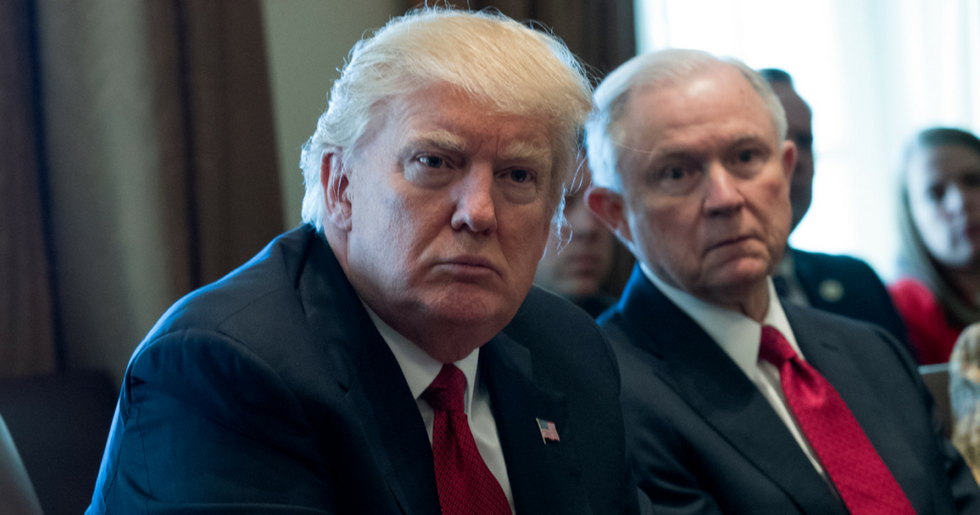 The Trump administration has released a document that it claims proves Democrats are responsible for the "Family Separation" border policy which authorizes immigration personnel to separate migrant children from their parents. Twitter is not taking kindly to the White House's false claims.

This is Orwellian stuff. WH claiming in this email that family separations are policy of congressional Democrats. I… https://t.co/ua0TJ9Hd2f
— Jim Acosta (@Jim Acosta) 1529091756.0

The memo states: "congressional Democrats have repeatedly voted against common sense immigration legislation that would make our communities safer."

This is unequivocally and demonstrably false.

Last month, Attorney General Jeff Sessions announced that children of parents attempting to enter into the United States across our border with Mexico would be separated from their parents.

“If you are smuggling a child, then we will prosecute you and that child will be separated from you as required by law,” the attorney general said at an event in Scottsdale, Arizona. “If you don’t like that, then don’t smuggle children over our border.“

You know how we know @realDonaldTrump, @PressSec, and @WhiteHouse are LYING about family separation? Because even n… https://t.co/VyNd6jCtjs
— Ted Lieu (@Ted Lieu) 1529093212.0

HuffPost's Elise Foley summarized the report as "immigrants are here to murder you and anyone who disagrees wants you murdered.”

The press release is "an intentional effort to mislead people," said Matt Fuller of HuffPost. Blaming Democrats for the policy is "fake news" and "lies," he tweeted.

There is no law authorizing or requiring the separation of children from their parents at the U.S.-Mexican border.

The Trump administration created and has unilaterally enforced this policy, effectively weaponizing the border patrol in an attempt to curb illegal immigration, including those who are seeking asylum in the United States.

“We don’t want to separate families, but we don't want families to come to the border illegally,” Sessions said. “This is just the way the world works.”

Others on social media tossed their thoughts in as well, lambasting the Trump administration for peddling these false claims.

Others pointed out that the press release didn't even mention the family separation policy, but instead reiterated the alleged threat of violence carried by immigrants.

@Acosta Wait - this statement doesn't even mention the policy of separating immigrant families at the border. It's… https://t.co/Y7QIb0hO27
— Julia Knippen (@Julia Knippen) 1529092882.0

Trump could end this policy immediately with one stroke of his pen, however, it's more politically expedient to pass the buck and blame the Democrats, who hold a minority in both houses of Congress.

@Acosta At the stroke of a pen, #Trump can change this policy like he has rescinded so many of the Obama area polic… https://t.co/KPdFtD0CNj
— Citizen_Campbell (@Citizen_Campbell) 1529092544.0