After Making a Questionable Claim About His Accomplishments at the UN General Assembly, Donald Trump Just Literally Became the Laughing Stock of the World 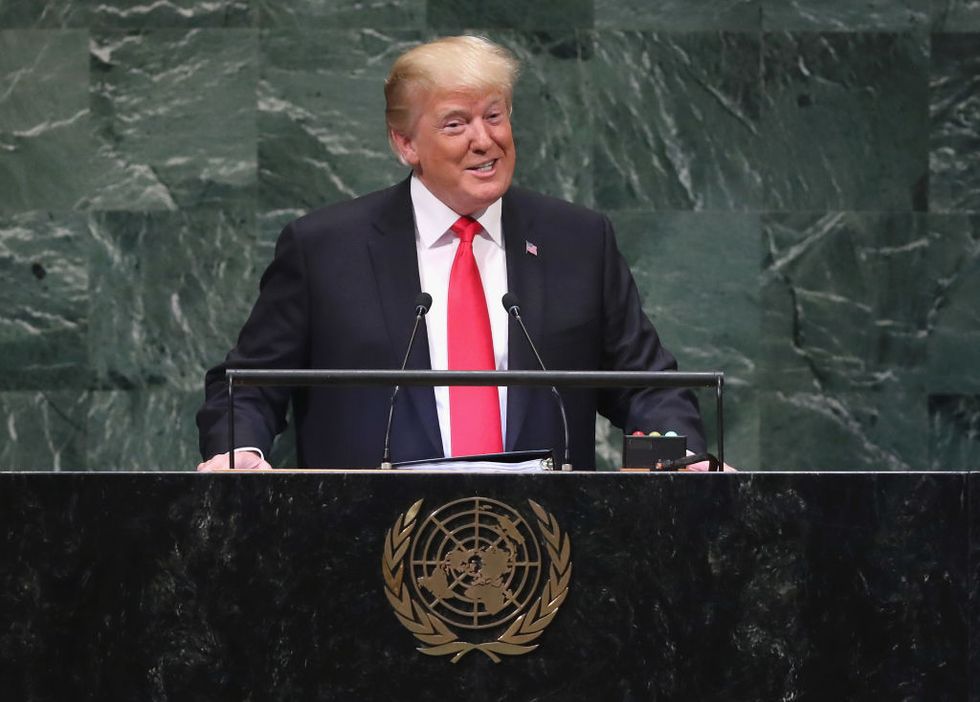 NEW YORK, NY - SEPTEMBER 25: U.S. President Donald Trump addresses the 73rd session of the United Nations General Assembly on September 25, 2018 in New York City. The United Nations General Assembly, or UNGA, is expected to attract 84 heads of state and 44 heads of government in New York City for a week of speeches, talks and high level diplomacy concerning global issues. New York City is under tight security for the annual event with dozens of road closures and thousands of security officers patrolling city streets and waterways. (Photo by John Moore/Getty Images)

President Donald Trump on Tuesday addressed the United Nations General Assembly in New York and was met with laughter after he boasted that his presidency was one of the greatest ever.

"America is governed by Americans," the president told the Assembly (as if this were ever in question) as he began his speech.

"In less than two years, my administration has accomplished more than almost any administration in the history of our country," Trump said. "So true," he added, which was promptly followed by laughter in the chamber.

"Didn't expect that reaction, but that's ok," Trump then joked.

This is what it looks like when the world is literally laughing at you.

"We have added 4 million new jobs including half a million manufacturing jobs. We have passed the biggest tax cuts and reforms in American history. We have started the construction of a major border wall and we have greatly strengthened border security. We have secured record funding for our military, $700 billion this year and $716 billion next year. Our military will soon be more powerful than it has ever been before."

Does this all seem familiar? It should.

During Barack Obama's presidency, Trump tweeted - six times - that the United States had become the laughing stock of the world.

We need a President who isn't a laughing stock to the entire World. We need a truly great leader, a genius at strategy and winning. Respect!
— Donald J. Trump (@Donald J. Trump) 1407569450.0

Obama, of course, was never an international punchline.

There was little discernable difference between Trump's speech to the UN and one he might give at a MAGA rally.

"The US is the world’s largest giver by far of foreign aid," Trump complained. "Few give anything to us."

"Moving forward, we will only give foreign aid to those who respect us and our friends," the president declared. "We expect other countries to pay their fair share for the cost of their defense."

The theme was "America First," and if necessary, America alone.

"We reject the ideology of globalism and we embrace the doctrine of patriotism."

“Together, let us choose a future of patriotism prosperity and pride,” Trump said. “Let us choose peace and freedom over domination and defeat. Let us come here to this place to stand for our people and their nations. Forever strong, forever sovereign, forever just.”

Overall, Trump's message was par for the course for Trump––peace through strength. And leave us alone.