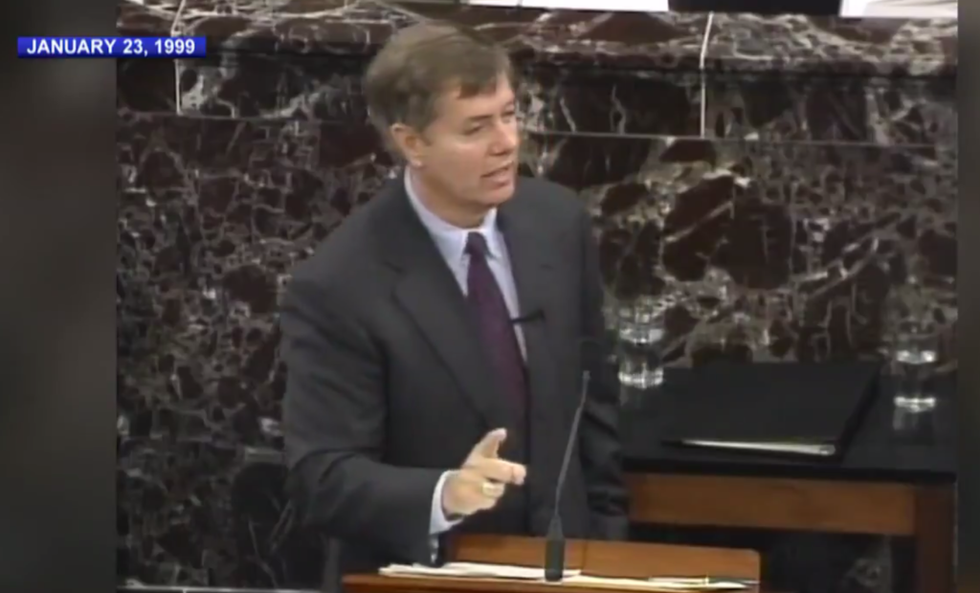 Screenshot of Lindsey Graham in 1999

With revelations from the Mueller Report shaking the public's faith in President Donald Trump, the calls to commence impeachment proceedings are growing louder, with Democratic Senators and presidential candidates Elizabeth Warren and Kamala Harris already on board.

Some Democrats insist that impeachment would be a dangerous move, citing the Republican majority in the Senate and the risk the left runs at looking hell-bent on removing Trump despite the lack of a proverbial "smoking gun" in Mueller's report.

But videos of Senator Lindsey Graham (R-KY) endorsing former President Bill Clinton's impeachment proceedings are laying some of those fears to rest.

Graham was speaking of the allegations that Clinton had instructed Monica Lewinsky to lie about their sexual relationship, which occurred during his time in office.

Trump's "fixer," Michael Cohen, testified in front of the House Oversight Committee that Trump telling the American people that there was no business in Russia while Cohen was actively negotiating with Russia for him. "In his way, he was telling me to lie."

What would Lindsey Graham have to say about that? "He doesn't have to say, 'go lie for me' to be a crime...You judge people on their conduct, not magic phrases."

"He encouraged people to lie for him. He lied. I think he obstructed justice. I think there's a compelling case tha… https://t.co/NBfjH9OzTE
— Scott Dworkin (@Scott Dworkin) 1556023472.0

But Graham has since changed his tune, saying that Trump's impeachment would be "an unhinged act of political retribution."

Using the Mueller report as a basis for impeachment would be an unhinged act of political retribution.
— Lindsey Graham (@Lindsey Graham) 1556033403.0

"Impeachment is not about punishment," Graham said in 1999.

"You don't even have to be convicted of a crime to lose your job," Graham said, explaining that "Impeachment is about restoring honor and integrity to the office."

The Mueller report explicitly states that it doesn't exonerate Trump on obstruction allegations. It also lays out ten instances of Trump that could be seen as obstruction.

To give some perspective: Clinton was being impeached over two charges of misconduct. Trump's obstruction of justice has been compared to that of the Nixon scandal.

Despite his 1999 claims that "impeachment is not punishment," Graham now says that Democrats are trying to use the Mueller report against Trump "to try to destroy his presidency."

Clinton was impeached by the House of Representatives on charges of perjury and obstruction of justice, and was later acquitted by the Senate.

"He turned the judicial system upside down," Graham said of Clinton in 1999. "He sent his friends to lie for him."