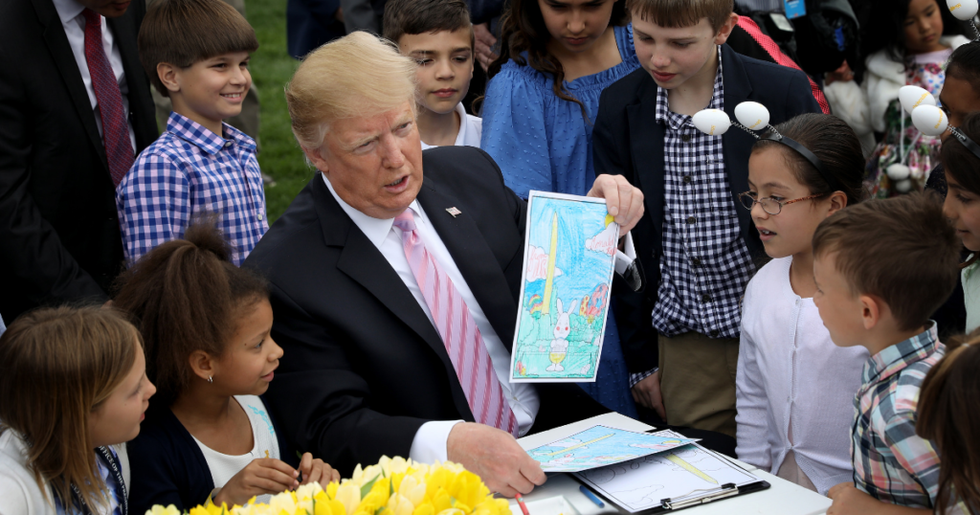 At the annual White House Easter Egg Roll on Monday, President Donald Trump claimed that a child encouraged him to continue pushing for a border wall with Mexico.

Trump was mingling and coloring cards for the troops with some kids when he said that a young man told him to "keep building that wall.”

"Here’s a young guy who said, ‘Keep building that wall.’ Can you believe that? He’s going to be a conservative someday!”

Watch Trump tout the exchange below:

“I will. Oh, it’s happening. It’s being built now,” Trump replied, overheard by the Boston Globe's Liz Goodwin. The wall as Trump envisions it is not being built," and his response seems more like a defense than an affirmation.

Given Trump's knack for distorting details of events, people have their doubts.

@johnlundin @JonTheCaptive Oh, okay - I thought Fox News told him he had to do it - after coming up with it from hi… https://t.co/spBUnVCEPe
— Pernicious Times (@Pernicious Times) 1555956732.0

Has Trump found his next Cabinet member?

Even with kids on Easter Monday.

In a speech kicking off the event, Trump boasted about his administration's accomplishments, including bragging about how big the military has gotten under his regime.

@thehill Parents should really be ashamed of themselves for even taking their kids to this event
— D Sherer 🇨🇦 (@D Sherer 🇨🇦) 1555962922.0

Everything is about Trump.

Class act, our 45th president is.