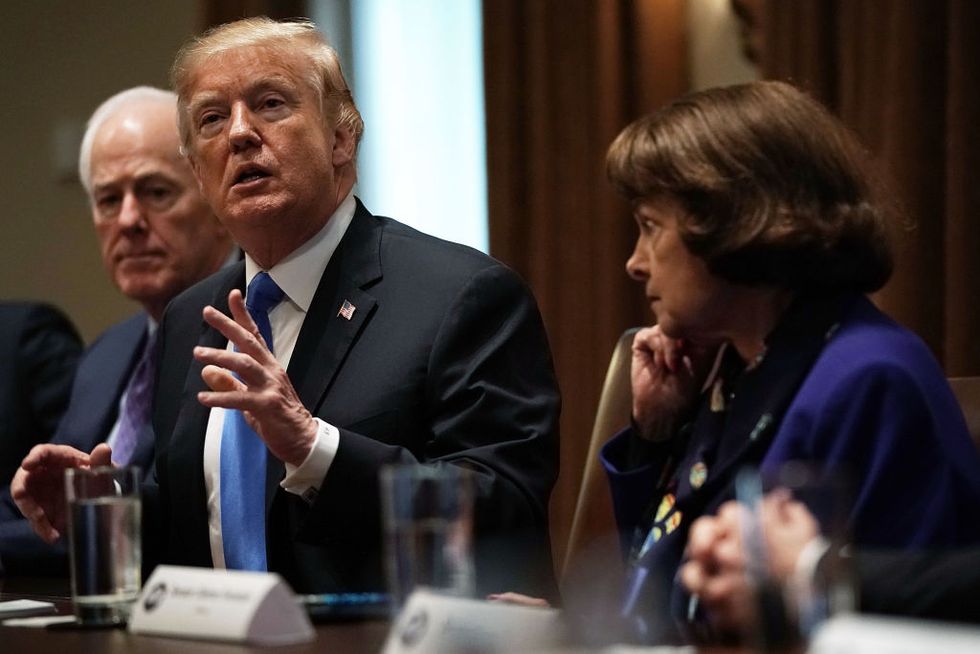 President Donald Trump's freewheeling style during a bipartisan meeting with lawmakers frustrated many Republicans after he expressed support for a "comprehensive" gun bill that would include strengthening background checks and temporarily taking guns away from individuals deemed a "high-risk" to public safety. the outlawing of "bump stock" devices and tighter age limits for buying rifles

"We want to pass something great, and to me the something great has to be where we prevent it from happening again," Trump said, referring to the Valentine Day's shooting at Marjory Stoneman Douglas High School in Parkland, Florida, which resulted in 17 deaths.

The president also appeared to support the outlawing of "bump stock" devices and tighter age limits for buying rifles similar to the one used in the Parkland shooting.

Trump then appeared to break from the NRA––which has tried to reel him in on gun control legislation––by accusing lawmakers of being so "petrified" by the NRA that they have not been willing to pass even rudimentary legislation.

Trump's comments were a boon for Democrats, who have often found themselves at odds with both the president and his base over gun control measures. His remarks pleased Senator Diane Feinstein (D-CA), who shook with glee after he suggested an assault weapons ban should be included in the measure to expand background checks on gun sales.

Feinstein, who became mayor of San Francisco after the shootings of George Moscone and Harvey Milk in 1978, authored the original assault weapons ban in the 1990s, and has struggled to reinstate it since Congress allowed it to expire in 2004. Feinstein sat next to Trump and arrived at the meeting with a letter to the president arguing for an assault weapons ban. She told him it would be possible to include the ban in a bigger bill “if you help.”

The president then asked Senators Joe Manchin (D-W.Va.) and Patrick Toomey (R-PA), the authors of the background check measure, if they could add an amendment to their bill which would ban assault weapons.

Most striking, however, was the president's declaration that law enforcement officials should be able to confiscate guns from American citizens without due process. He denounced what he perceives as excessive "checks and balances" which limit remedies to prevent mentally unfit individuals from keeping or buying firearms.

"Take the firearms first, and then go to court," Trump said, cutting off Vice President Mike Pence as Pence regurgitated due process arguments which the NRA and other guns rights advocates have used to curb gun control measures."You could do exactly what you're saying, but take the guns first, go through due process second."

“Allow due process, so that no one's rights are trampled,” Pence said.

“Or, Mike, take the firearms first and then go to court,” Trump interrupted. “Because a lot of times, by the time you go to court, it takes so long to go to court, to get the due process procedures. I like taking the guns early, like in this crazy man's case that just took place in Florida. … To go to court would have taken a long time.”

Only one Republican, Senator Ben Sasse (R-NE) appears to have spoken out with an explicit objection to Trump's comments.

"Strong leaders don't automatically agree with the last thing that was said to them," Sasse said in a statement. "We have the Second Amendment and due process of law for a reason. We're not ditching any Constitutional protections simply because the last person the president talked to today doesn't like them."

Trump once again appeared to break from the NRA when he dismissed an NRA-backed proposal to expand gun owners' ability to carry concealed weapons. He said adding concealed carry to the legislation would spell its demise.

"If you add concealed carry to this, you'll never get it passed," Trump told House Majority Whip Steve Scalise (R-LA), who survived a mass shooting at a Congressional baseball practice last year. "We want to get something done."

"It isn't as much about the NRA as the millions of people who strongly, passionately believe that they should have the right under the Constitution to defend themselves and their families, and I strongly support that right," he said. "Our Founding Fathers strongly believed in the right of law-abiding citizens to defend themselves when they founded this county. We ought to preserve that."

Despite the pushback from conservatives, Trump, for his part, believes the meeting was a success. "It was an honor to welcome bipartisan members of Congress for a discussion on SAFE schools and SAFE communities," he wrote on Twitter. "As we continue to mourn the loss of so many precious young lives in Parkland, we are determined to turn our grief into action."

It was an honor to welcome bipartisan members of Congress for a discussion on SAFE schools and SAFE communities. As… https://t.co/EPB1EN3HRc
— Donald J. Trump (@Donald J. Trump) 1519853656.0

Earlier this morning, the president wrote that the meeting produced "Many ideas, some good & not so good." He announced that proper gun control legislation "should emerge," and reassured his base that the Second Amendment would be respected despite the contention within his own party.