Not even you, Donald. 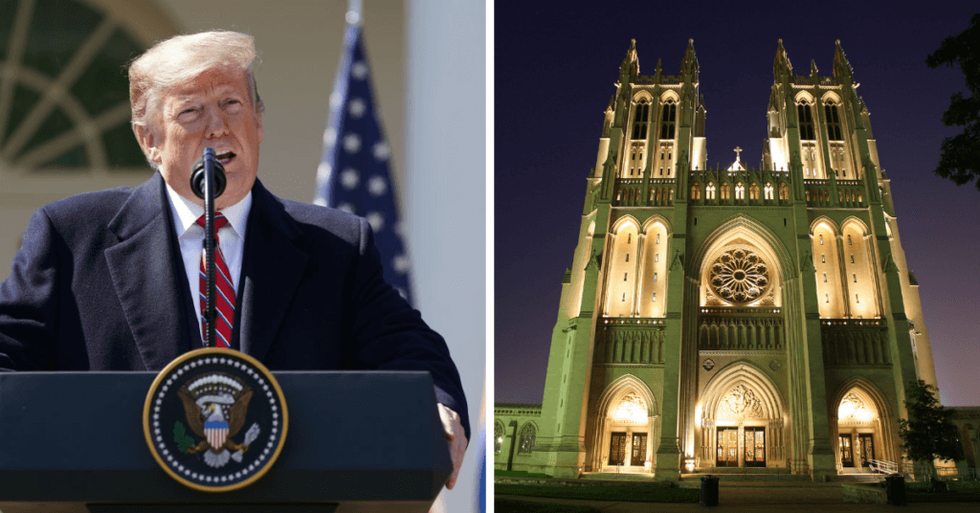 During an appearance at a General Dynamics tank factory in Lima, Ohio, earlier this week, President Donald Trump took aim at John McCain again, saying he “didn’t get the job done” for veterans. He also complained that he did not receive gratitude for giving McCain "the kind of funeral he wanted" last September.

“I gave him the kind of funeral he wanted, which as president I had to approve,” Trump said. “I don’t care about this, I didn’t get a thank-you, that’s okay. We sent him on the way. But I wasn’t a fan of John McCain. I have to be honest, I never liked him much. Hasn’t been for me. I’ve really, probably, never will.”

But the Washington National Cathedral, which hosted McCain's funeral service, has disputed that claim.

“Washington National Cathedral was honored to host the funeral service for Sen. John McCain. All funerals and memorial services at the Cathedral are organized by the family of the deceased; only a state funeral for a former president involves consultation with government officials,” a cathedral spokesperson told The Huffington Post. "No funeral at the Cathedral requires the approval of the president or any other government official.”

Lying in state at the U.S. Capitol requires congressional authorization, not presidential authorization. In truth, Trump only allowed the use of military transport to transfer McCain's body to the Washington National Cathedral for the funeral service.

To many, the Washington National Cathedral's rebuke is no surprise.

What a time to be alive. Even the Washington National Cathedral throws shade on trump... https://t.co/JRFBspBM5e
— Rolanda James (@Rolanda James) 1553196067.0

When the church, the Washington National Cathedral, calls @realDonaldTrump out on his lies. What a fucking piece of… https://t.co/rAENY5enFJ
— Matt Croyle (@Matt Croyle) 1553200034.0

The Washington National Cathedral's statement comes the same week that Trump launched new attacks at McCain, who passed away last August after a long battle with glioblastoma.

He also, without evidence, claimed that McCain was working with Democrats and “the Fake News” to use the Steele dossier against him.

“No one will ever love you the way they loved my father,” she said. “I wish I had been given more Saturday’s [sic] with him. Maybe spend yours with your family instead of on twitter obsessing over mine?”

Not long after, the McCain Institute, which works to “champion civic engagement in the United States and abroad” used the president’s attacks to create a page on its website dedicated to commemorating McCain’s achievements.

An email blast that the think tank sent to its followers defends McCain’s record and includes mentions of his support for veterans and immigrants, his work to institute campaign finance reform and his pivotal vote on Obamacare.

The @McCainInstitute just blasted out a point-by-point refutation of Trump’s attack on the late senator. https://t.co/5dugUvGuKf
— Andrew Desiderio (@Andrew Desiderio) 1553133587.0

The president has not responded to any of these rebuttals.