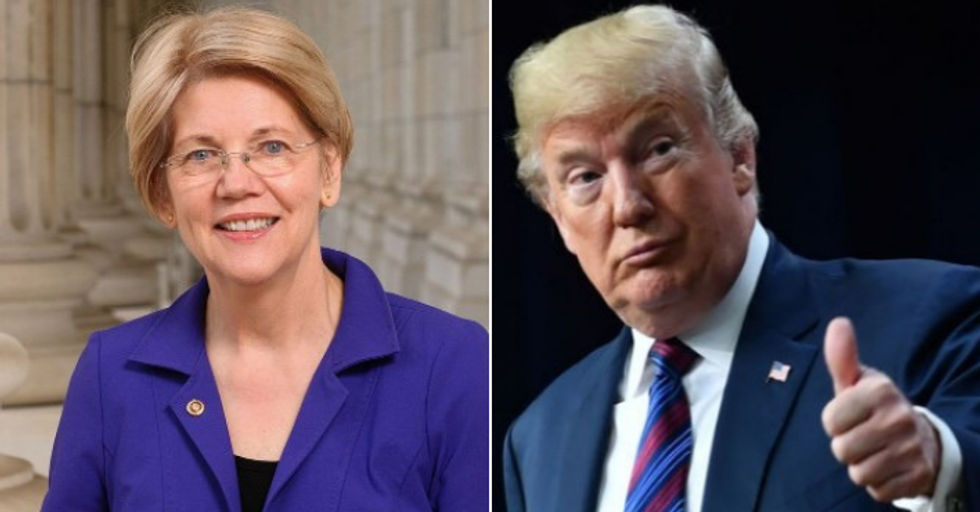 On Monday, the DNA test of a sitting United States Senator made front page news of a major newspaper. Why and how did this happen? It was a response to a series of lies and slurs from President Donald Trump.

During his rallies, President Trump likes to play to his supporters by attacking his political rivals, especially those he thinks might challenge him for the presidency in 2020. His attacks often involve the same name calling he employs in his Twitter feed.

A favorite Trump target is Massachusetts Senator Elizabeth Warren. The President often refers to the legislator as "Pocahontas" despite repeatedly being asked by Native American leaders to stop using the name of a real person and member of the Tsenacommacah Algonquian Confederacy as his version of a racial slur.

Warren—like many in the United States and Canada—grew up with stories of an unnamed Native American ancestor in their family. And like many people, Warren embraced the stories from her childhood while not knowing who the ancestor was or the unnamed ancestor's tribal identity.

There are 566 federally recognized tribes in the United States categorized as "Indian Entities Recognized and Eligible To Receive Services From the United States Bureau of Indian Affairs" with more tribes who fall outside that designation.

In attempts to discredit Warren, the right found a Harvard-made reference to Warren's ancestor. From there, the reference made by Harvard was falsely conflated to include Warren taking Native designated scholarships and jobs based on her one ancestor.

These claims are all false, but Trump's supporters continue to repeat his false statements about Warren's academic career.

Then back in July at a rally in Montana, Trump once again mocked Warren, again calling her Pocahontas. Trump claimed he would challenge Warren to take a DNA test to prove she had a Native ancestor and if she did, he would donate $1 million to a charity of her choice.

Senator Warren called Trump's bluff on Monday when she released results of a DNA test showing she does have an unidentified Native American ancestor. The Massachusetts Senator took to Trump's favorite form of communication, Twitter, to share the news.

The story also appeared on the front page of The Boston Globe.

Warren went on to outline what charity Trump's check would go to.

She also asked about another promise Trump made before the 2016 election, that he release his tax returns if he became President.

I took this test and released the results for anyone who cares to see because I’ve got nothing to hide. What are YO… https://t.co/Os3PGyvmtV
— Elizabeth Warren (@Elizabeth Warren) 1539608739.0

However, when asked about his challenge and promise to Warren, Trump denied his statements.

However, there is video from his July Montana rally.

"I will give you a million dollars to your favorite charity, paid for by Trump, if you take the test and it shows you're an Indian."

Dear @realDonaldTrump with the findings of the new Elizabeth Warren story and your blatant lie, I suggest you PAY U… https://t.co/4eetyC9iCv
— Color me Silly 🇺🇸 (@Color me Silly 🇺🇸) 1539617088.0

While the results show an ancestor 6 to 10 generations removed from Warren, Trump failed to specify in his challenge how much Native ancestry Warren has or how close a relation the Native ancestor was.

And while the right now claims Warren does not have enough or a close enough relation with Native ancestry...

These people in my mentions adamant on exposing Elizabeth Warren as deceptive or a liar who never check President T… https://t.co/3ycw8tF10I
— Eugene Scott (@Eugene Scott) 1539617082.0

...many in the Native community recognize Warren's DNA results as what they are. Warren remains mostly European with a single unnamed, unknown ancestor of indeterminate tribal affiliation. Warren can verify her mother's story of a Native in their family tree, but not much else.

"I’m not enrolled in a tribe and only tribes determine tribal citizenship, I understand and respect that distinctio… https://t.co/bzBUufYzBN
— Krystal Tsosie (@Krystal Tsosie) 1539610540.0