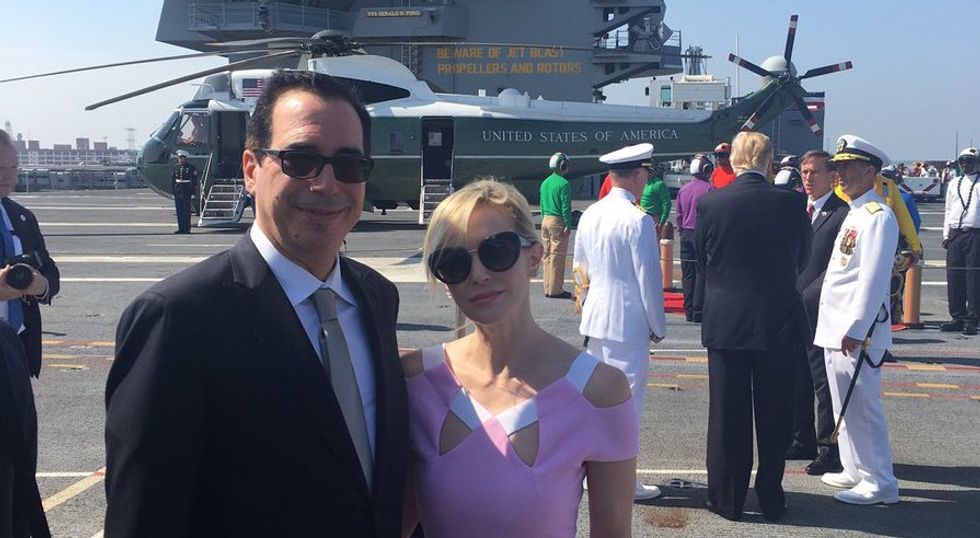 Treasury Secretary Steven Mnuchin has flown on military aircraft seven times since March. These taxpayer funded flights cost more than $800,000. One round trip flight to New York to meet with President Trump at Trump Tower cost more than $15,000.

Treasury secretaries generally take commercial flights because of the exorbitant cost of using military planes. Mr. Mnuchin’s June flight to Miami for a meeting with the Mexican finance minister cost $43,725.50. The approved flight prompted a note to Mr. Mnuchin’s assistant from the Treasury Department’s travel office. They cited a round-trip commercial flight would cost just $688.

Prompted by an Instagram posting by his wife, the inquiry into Mr. Mnuchin’s air travel found he broke no laws in his use of military aircraft. However it took issue with the loose justifications provided, and accepted, for such costly flights.

What is of concern is a disconnect between the standard of proof called for (by the Office of Management and Budget/OMB) and the actual amount of proof provided by Treasury and accepted by the White House in justifying these trip requests."

Mr. Mnuchin made nine requests for military aircraft since assuming his position earlier this year. He withdrew a request to use a military plane for his European honeymoon with his wife, Louise Linton, in August. The same Instagram post that sparked the investigation prompted the cancellation.

The investigation also follows a series of controversies over lavish travel by several members of President Trump’s cabinet. Tom Price, Secretary of Health and Human Services, resigned last week partly over his own almost $1,000,000 for chartered and military flights.

Continue reading on next page...

Interior Secretary Ryan Zinke used chartered flights, including a $12,000 trip to deliver a speech celebrating a new professional hockey team in Las Vegas. Scott Pruitt, head of the Environmental Protection Agency, spent more than $58,000 on chartered and military flights. David Shulkin, Secretary of Veterans Affairs, took his wife on a 10-day trip to Europe that mixed business meetings and sightseeing.

The Treasury report found no instances of Mr. Mnuchin using military aircraft for strictly private travel. In the now infamous Instagram post, Louise Linton hashtagged the eclipse leading some to speculate they timed their trip to Kentucky for the best view of the solar eclipse.

The report stated “there is no indication that the date was chosen to coincide with the solar eclipse.” Mr. Mnuchin asked for a Gulfstream 550 military jet "in case the runway at Fort Knox was wet" and because a plane with “communications capabilities is requested in the event that the secretary’s participation on a call during travel arises.” The flight cost $26,900.25.

The inspector general noted a memo from OMB called for more “rigor” in justifying government aircraft requests. It also expressed concern about the “boilerplate” justifications that the Treasury Department offered.