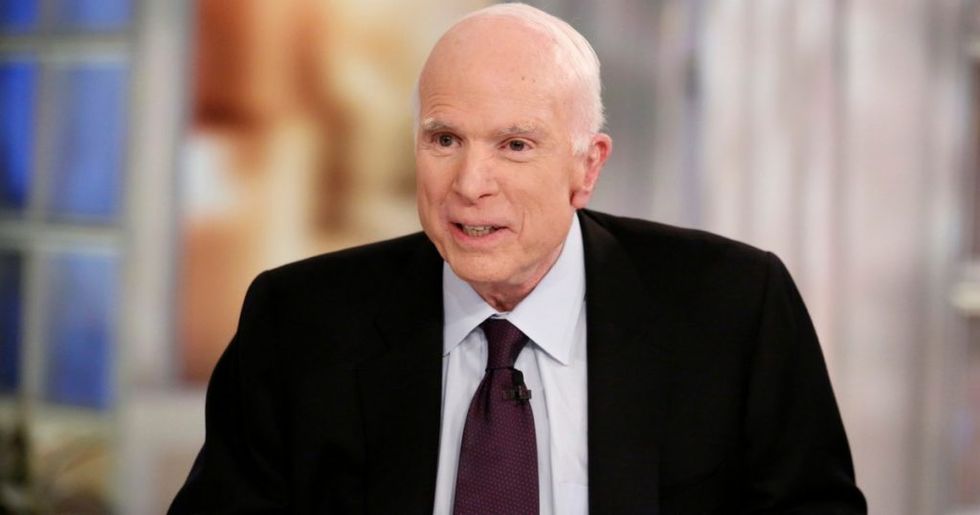 THE VIEW - It's Meghan McCain's Birthday with a special visit from her father, Senator John McCain on 'The View,' airing Monday, October 23, 2017 on ABC's 'The View.' 'The View' airs Monday-Friday (11:00 am-12:00 pm, ET) on the ABC Television Network. (Photo by Heidi Gutman/ABC via Getty Images) JOHN MCCAIN, MEGHAN MCCAIN

Following Senator John McCain's (R-AZ) death on Saturday, social media has been flooded with tributes and support for McCain's family. As the news of his passing broke, President Donald Trump tweeted his "deepest sympathies and respect" to the late Senator's family - but nothing about McCain.

The president and McCain had a rocky relationship, often exchanging barbs and regularly criticizing the other, like when Trump said he "liked people who weren't captured," referring to McCain's time as a prisoner of war in Vietnam.

CNN reported on Monday that the White House had drafted an official statement about McCain for Trump, but that the president, who spent the weekend golfing, wasn't interested in releasing it. On Sunday, the Washington Post learned that Trump only wanted to send a tweet, instead of giving a more visible statement.

Other world leaders however, offered the sorts of tributes one would have expected of the American President.

Canadian Prime Minister Justin Trudeau, for example, said McCain was "an American patriot and her whose sacrifices for his country, and lifetime of public service, were an inspiration to millions."

Senator John McCain was an American patriot and hero whose sacrifices for his country, and lifetime of public servi… https://t.co/qiXtL3qPmN
— Justin Trudeau (@Justin Trudeau) 1535245973.0

French President Emmanuel Macron wrote that McCain was a "true American hero" who "devoted his entire life to his country."

John McCain was a true American hero. He devoted his entire life to his country. His voice will be missed. Our resp… https://t.co/EzdMd0ilJu
— Emmanuel Macron (@Emmanuel Macron) 1535279013.0

McCain was a "great statesman, who embodied the idea of service over self," British Prime Minister Theresa May tweeted on Sunday. May added that McCain was a "friend of the UK."

German leaders were especially respectful to McCain in the hours after his passing. Chancellor Angela Merkel praised McCain as "one of the great political figures of our time."

Senator McCain was led by the steadfast belief that the aim of every political activity is to serve freedom, democracy and the rule of law. His death is a loss to all those who share that belief.

German Defense Minister Ursula von der Leyen expressed respect for McCain's "impressively forthright, courageous and indomitable character," while Bundestag President Wolfgang Schäuble said McCain's "unshakable commitment to the values of the free world and trans-Atlantic alliance," made him "an inspiration to many across the Atlantic and party lines."

NATO Secretary General Jens Stoltenberg tweeted that McCain was an "American and Atlanticist," who "will be remembered both in Europe and North America for his courage and character, and as a strong supporter of NATO."

John McCain - soldier and senator, American and Atlanticist. He will be remembered both in Europe and North America… https://t.co/ogxynQeeSP
— Jens Stoltenberg (@Jens Stoltenberg) 1535256033.0

Reactions to Trump's cold shoulder to McCain were brutal.

@realDonaldTrump The least you can do now is make a formal proclamation for the nation to be flags half mast. But I… https://t.co/RkGgsSLnEZ
— Andrea Sanchez (@Andrea Sanchez) 1535288252.0

@realDonaldTrump WH aides even prepare a statement for you. You ignored it. Now we are getting to the low of lows… https://t.co/qNVYghfCQx
— David Yee (@David Yee) 1535374091.0

American leaders outgunned Trump with their respects to McCain as well.

Former President Barack Obama, who defeated McCain in the 2008 presidential contest, said: "Few of us have been tested the way John was," and that "we are all in his debt" for his service to the country.

Former President Bill Clinton said McCain "lived by his creed" that "every citizen has a responsibility to make something of the freedoms given by our Constitution."

John McCain believed that every citizen has a responsibility to make something of the freedoms given by our Constit… https://t.co/oI2cBhNH7v
— Bill Clinton (@Bill Clinton) 1535247414.0

Our thoughts, prayers and deepest sympathy to the McCain Family. Thank you Senator McCain for your service to the nation.
— Melania Trump (@Melania Trump) 1535244257.0

...and Vice President Mike Pence wrote that he and his family "honor his lifetime of service to this nation in our military and in public life."

Shortly before he died, McCain requested that Trump does not attend his funeral and that he wanted former Presidents Obama and GW Bush to give eulogies.