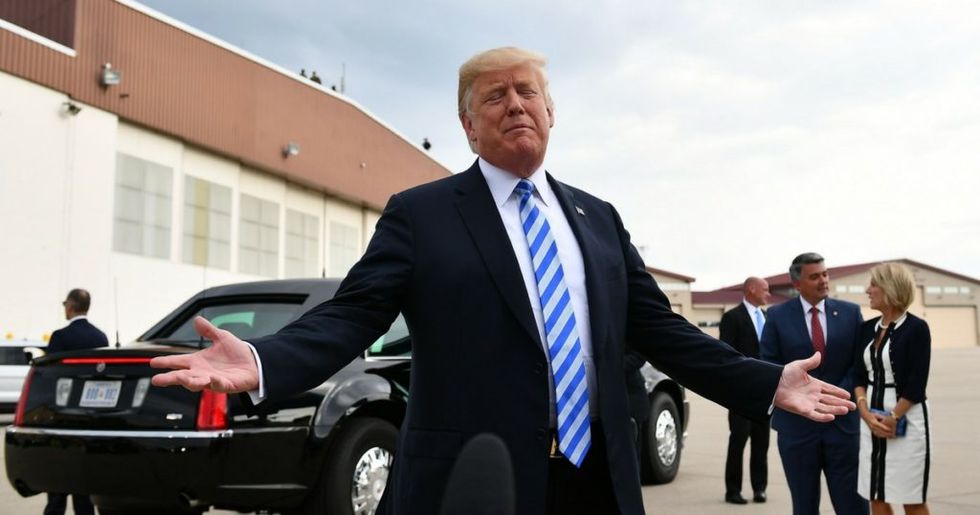 TOPSHOT - US President Donald Trump speaks to the press upon arrival at Yeager Airport in Charleston, West Virginia on August 21, 2018. - Trump said he was 'very sad' about Manafort conviction. Donald Trump's former campaign chief Paul Manafort was found guilty of fraud Tuesday, in the first trial resulting from the investigation into Russian meddling in the 2016 presidential election. (Photo by MANDEL NGAN / AFP) (Photo credit should read MANDEL NGAN/AFP/Getty Images)

President Donald Trump started his Thursday by hopping onto Twitter and boasting that the White House is operating like a "smooth running machine." Needless to say, the president has been getting dragged for it day.

"Ivanka Trump & Jared Kushner had NOTHING to do with the so-called “pushing out” of Don McGahn.The Fake News Media has it, purposely, so wrong!" Trump wrote. "They love to portray chaos in the White House when they know that chaos doesn’t exist-just a “smooth running machine” with changing parts!"

Trump fired White House Counsel Don McGahn on Wednesday morning, (via Twitter of course), fueling rumors that his daughter and other senior staffers were concerned that the firing was due to Trump's displeasure over the Russia investigation. In January, Trump learned McGahn had fully cooperated with Special Counsel Robert Mueller.

Twitter users quickly pointed out that Trump's White House doesn't resemble anything close to a "smooth running machine," specifically due to its historically high turnover, non-stop leaks, and legal entanglements.

People are wondering if a bombshell is about to drop.

@LukaBrazzi There must be something big coming down soon. He's gone completely crazy the last two days.
— DJMcNeer🇺🇸🌊🇺🇸 (@DJMcNeer🇺🇸🌊🇺🇸) 1535634542.0

Trump tweeted again a few hours later, saying he is "very excited about the person who will be taking the place of Don McGahn as White House Counsel!" The unhinged tweet also contained denials that McGahn stopped Trump from firing Mueller and Attorney General Jeff Sessions.

Note: this is the second time Trump tweeted this. The first version was deleted (in violation of the Presidential Records Act) because Trump misspelled "Counsel."

Trump has publicly denied considering firing Mueller or Sessions, however, this tweet appears to refute that.

And then there was this gem. Huh?

The only thing James Comey ever got right was when he said that President Trump was not under investigation!
— Donald J. Trump (@Donald J. Trump) 1535630188.0

No one is buying it.