Donald Trump Misspelled 'Marine Corps' in a Tweet, and Veterans Are Not Holding Back 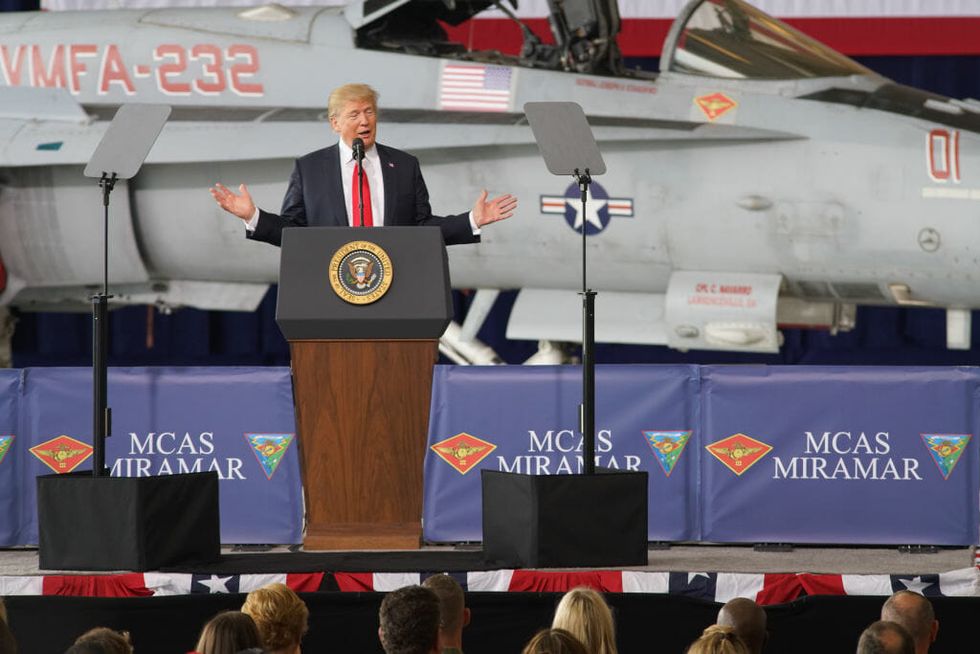 Veterans reacted with offense after President Donald Trump, in a since-deleted tweet, didn’t refer to the Marine Corps, but the Marine “Core,” a mistake many said they're shocked the nation's commander-in-chief would make.

This is far from the president's first error while employing the English language, and it's unlikely to be his last.

“It was my great honor to deliver a message at the Marine CoreAir Station Miramar to our GREAT U.S. Military, straight from the heart of the American People,” Trump wrote after visiting the Marine Corps Air Station Miramar in San Diego, where he addressed United States Marine troops. “We support you, we thank you, we love you – and we will always have your back!”

In a piece for Uproxx, writer Stacey Ritzen points out:

Given Trump’s fervent obsession with black athletes taking a knee during the national anthem and his claim that it disrespects the flag and our troops, not being able to correctly identify a major a branch of the United States Armed Forces is glaring, to say the least.

"Maybe General Kelly can get a copy of the Grammar for Marines MCI for you," reads a message from VoteVets, an organization which works to elect veterans that uphold "progressive values" to public office. The organization notes in its bio that its Twitter page has been blocked by the president.

"I served for more than 20 years in the Marine Corps," wrote Matt Morgan, a veteran who lives in Michigan, who, like Uproxx's Stacey Ritzen, notes "that our Commander-in-Chief doesn't know the difference between a Corps and a "Core" is more than a spelling error."

"The fact that Trump doesn't even know that it's the MARINE CORPS and not the MARINE CORE show exactly why he shouldn't be the Commander in Chief," wrote Jacob Gil, a U.S. Army veteran and father of four who lives in Texas.

#WednesdayWisdom The fact that Trump doesn't even know that it's the MARINE CORPS and not the MARINE CORE show exac… https://t.co/mNLIaf4K2i
— Jacob Gil (@Jacob Gil) 1520988121.0

"If it truly was your honor you would know it's Marine CORPS, not CORE," wrote another veteran, who further criticized the president for entertaining the "dishonorable" idea of throwing an elaborate military parade in our nation's capital with money that "could be used for homeless veterans and vet mental health."

@realDonaldTrump If it truly was your honor you would know it’s Marine CORPS, not CORE. And throwing a military par… https://t.co/YJ3Xx2oqGO
— Sgt Snowflake (@Sgt Snowflake) 1520988665.0

"Take it from a veteran, our military deserves better than a lying, malignant narcissist for a commander in chief," wrote veteran Casey Hinds, a self-identified member of the resistance against the president.

@realDonaldTrump Someone had to explain to Cadet Bone Spurs the difference between the Marine Corps & the "Marine C… https://t.co/FR9yey8lsx
— She persisted (@She persisted) 1520988159.0

Among them: CNN's Jim Acosta.

"It’s baffling that the president of the United States would tweet Marine Core instead of Marine Corps but that’s like the 20th most shocking thing that’s happened today," wrote Acosta, who's had a front row seat to "shocking" announcements as a member of the White House press corps.

It’s baffling that the president of the United States would tweet Marine Core instead of Marine Corps but that’s li… https://t.co/2ryP0HyBUB
— Jim Acosta (@Jim Acosta) 1520987798.0

Meanwhile, New York Magazine's Jonathan Chaitobserved that if a Democratic president had made the same mistake Trump just made, the Republican Party would have turned it into a rallying cry and "campaign theme."

"Conservatives would be talking about it 40 years later," he said, "like Jimmy Carter 'inordinate fear of communism' stories."

As if to accentuate Chait's point, Dave Holmes, the editor at large for Esquire, responded to the controversy with the following message:

Trump also came under fire for suggesting––during the same appearance––that the United States should launch a “Space Force," devoted to waging wars in space.

“Space is a war-fighting domain, just like the land, air and sea,” Trump said. “We may even have a Space Force, develop another one, Space Force. We have the Air Force, we’ll have the Space Force.”

He added: “Then I said, ‘What a great idea!’ Maybe we’ll have to do that. So think of that: Space Force, because we are spending a lot and we have a lot of private money coming in, tremendous.”