Donald Trump Just Claimed There Will Be Violence If Republicans Lose the House in November, and the Internet Is Not Having It 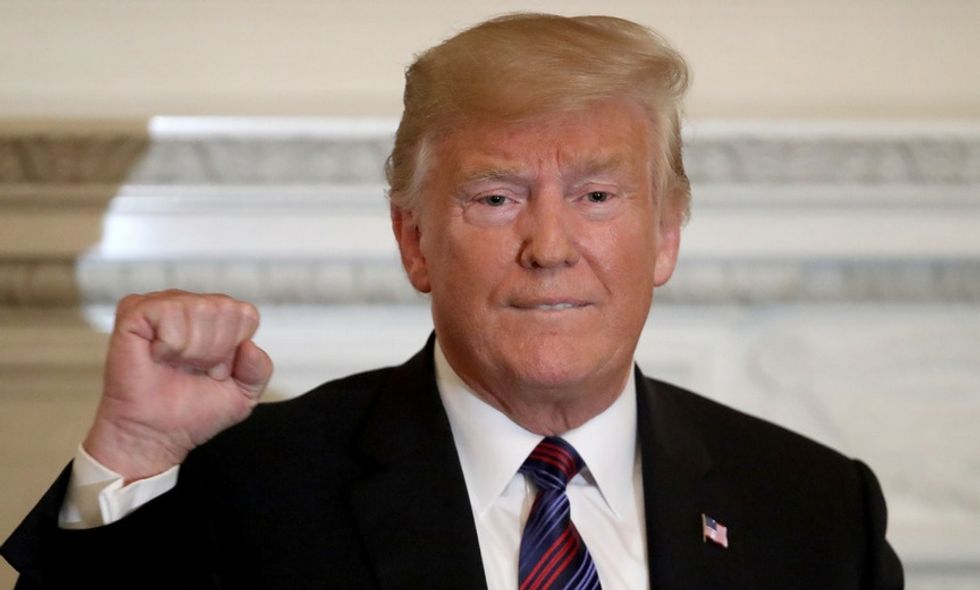 In a closed-door dinner with Evangelical leaders, President Donald Trump warned his audience that there would be violence if Republicans did not remain in control after the 2018 midterm elections.

In a secret recording, Trump claimed:

The level of hatred, the level of anger is unbelievable. Part of it is because of some of the things I've done for you and for me and for my family, but I've done them...This Nov. 6 election is very much a referendum on not only me, it's a referendum on your religion, it's a referendum on free speech and the First Amendment. They will overturn everything that we've done and they'll do it quickly and violently, and violently. There's violence. When you look at Antifa and you look at some of these groups — these are violent people.

The president also claimed to have abolished the Johnson act—a law prohibiting the endorsement of candidates by religious organizations and charities, however that claim is false. While Trump did issue an executive order calling for leniency in its enforcement, Trump does not have the power to unilaterally strike down laws.

However, it was his claims of violence that unsettled Americans the most.

I once argued that people should give Trump a chance. I am sorry for that. Now, I ask for "thoughts and prayers" t… https://t.co/TkszAirTVt
— Fred Guttenberg (@Fred Guttenberg) 1535492297.0

When it comes to condoning or inciting violence, Trump has proven himself to be skilled.

One of the now-president's main criticisms during the 2016 campaign was that he repeatedly encouraged his increasingly ravenous supporters to commit violence at rallies.

He even offered to pay their court fees at a campaign rally:

If you see somebody getting ready to throw a tomato, knock the crap out of them, would you? Seriously, ok. Just knock the hell — I promise you I will pay for the legal fees, I promise.

The incident in Iowa was caught on video:

Eventually, people began listening to him, including one man who, after punching a protestor, said supporters may have to kill him.

Trump also mentioned Antifa at the dinner. Antifa as a group came to prominence during the Unite the Right rally in Charlottesville last year. The group wore helmets and carried blunt objects to face Nazis and white supremacists who were carrying assault weapons. Trump later equated those protesting the white supremacists with white supremacists themselves.

This was after one of the white supremacists protestors mowed down Heather Heyer with his car, murdering her. Former KKK Grand Wizard David Duke praised Trump for his statements on Charlottesville.

A poll conducted this year showed Trump with 75 percent of white Evangelical support, making it likely that the crucial aspect of his base will heed his warnings, regardless of the little truth they hold.