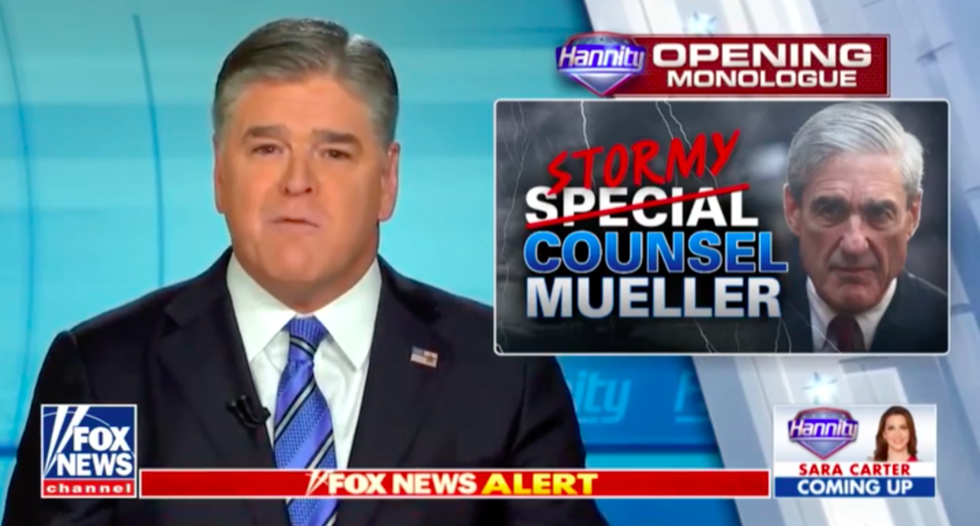 @realDonaldTrump @seanhannity @FoxNews Sir, it is disgraceful that the President of the United States would promote… https://t.co/w8MkfgakGp
— Mia Farrow (@Mia Farrow) 1523539234.0

@realDonaldTrump @seanhannity @FoxNews Mr Trump. I would rather barbeque my eyelids than watch Hannity on Fox. You… https://t.co/tpVPidLgLZ
— Raphael Kozlowski (@Raphael Kozlowski) 1523536652.0

@realDonaldTrump @seanhannity @FoxNews Are you.advertising for Fox News now? I know their ratings are down & they a… https://t.co/rpSXyIEbL4
— Betty Speaks (@Betty Speaks) 1523495265.0

Hannity's "big show" delivered with some conspiracy theories of his own, most notably when he presented a “Mueller crime family” chart that suggested the special counsel is in league with the "deep state" to remove Trump from office.

“If he’s going to use this sweeping analogy, I’ve decided tonight we’re going to use—the 'Comey standard' I call it—and make some comparisons of our own,” Hannity said, starting the mob boss section of his program with an aside he called “The Clinton crime family.”

Delving into the sexual assault allegations against former president Bill Clinton, Hannity said. “Hillary Clinton—we know she committed crime,” a reference to the FBI's investigation into her use of a private email server despite the organization finding no evidence of criminal acts perpetrated by Clinton while she served as Secretary of State.

While describing the "Mueller crime family," Hannity likened the Russia investigation to a "witch hunt" and accused Mueller’s office of “looking the other way” during his time as a federal prosecutor in Boston.

This is the second time Hannity has attacked Mueller this week, starting on Monday night, when he declared that "there’s no limit at all into the fishing expedition that Mueller is now engaged in" after FBI agents raided the office of Michael Cohen, the president's personal lawyer.

The "deep state" buzzword is one of Hannity's favorites and he's weaponized it effusively, so effusively, in fact, that the president––and his supporters––hastened the term's entry into public parlance.

According to a Monmouth University poll released last month, most necessarily wouldn't necessarily be able to define the "deep state"––“a group of unelected government and military officials who secretly manipulate or direct national policy"––if you asked them to. They're just pretty sure it exists.

While only 37 percent of Americans said they were at least “somewhat familiar” with the term “deep state.” However, given the description, 27 percent said the deep state "definitely" exists and 47 percent said it "probably" exists.

The show also featured an appearance from longtime Washington lawyer Joseph diGenova, who recently vacated a position on the president's legal counsel. DiGenova has obtained a certain notoriety for his markedly more aggressive stance toward the special counsel's probe into Russian interference and has pushed conspiracy theories on television that a secretive group of FBI and Justice Department officials concocted the Russia investigation to frame and take down the president.

"Rod Rosenstein is so incompetent, compromised and conflicted that he can no longer serve as the deputy attorney general," diGenova said during a monologue in which he called on Attorney General Jeff Sessions to remove Rosenstein:

First of all, it is now clear that no matter what James Comey says about the president of the United States, which are disgraceful comments by a former FBI director and he has besmirched forever his term as FBI director, what we now know and have known for almost two years is James Comey is a dirty cop. He is a completely dirty cop who was compromised from the very beginning of the investigation in the Hillary Clinton.

And it is also very clear that Rod Rosenstein is so incompetent, compromised and conflicted that he can no longer serve as the deputy attorney general. And Jeff Sessions now has an obligation to the president of the United States to fire Rod Rosenstein after Rosenstein authorized the unconstitutional and unprofessional search of the office of Michael Cohen in New York.

diGenova's comments came on the heels of reports that the president is considering firing Rosenstein for signing off on a search warrant and authorizing the raid of Michael Cohen's office. Individuals with knowledge of the discussions say that Steve Bannon, the president's former chief strategist, is recommending he do just that.

Bannon recommends that the White House cease cooperating with Mueller and for Trump to invoke executive privilege. In doing so, Trump would attempt to render interviews with Mueller’s team with White House officials “null and void.”

“The president wasn’t fully briefed by his lawyers on the implications” of not invoking executive privilege, Bannon told The Washington Post. “It was a strategic mistake to turn over everything without due process, and executive privilege should be exerted immediately and retroactively.”

He continued: "They call it fake news, they call it entertainment. And that's fine if people want to be entertained that way at night. People watch the Kardashians, too. But when you have people at Fox News saying that's not really news, that's entertainment, it is. It's trash, though."

In a scathing op-ed for The Washington Post titled "The entirely legal collusion of Sean Hannity" blogger Eric Wemple pointed out further condemnations on social media...

...and railed into Hannity himself:

Or, perhaps, call it collusion — media collusion. Just how it gets transacted isn’t always clear. An inquiry to Fox News about Trump’s heads-up fetched a referral to Hannity’s tweet denying any heads-up about what Hannity said in his monologue about crime bosses — a disclaimer that leaves a hole or two. The White House hasn’t yet responded to a question about whatever Trump knew about the “big show,” if anything.

Not that answers to those questions much matter. The broad outlines of this wholly legal form of info-collusion are, by now, quite familiar. We’ve known Hannity is a Trumpite for some time. Starting in the campaign, Hannity distinguished himself as a booster of Trump both on air and off: participating in a video promotion, providing political advice and even paying for a potential vice-presidential candidate to fly to an interview.

So why belabor all of this? Because it really is astounding: A sitting president chooses to use his enormous Twitter following — his official position — to pluck a single program from the roster of cable news programs — and promote it to the country. The show then proceeds to air specific talking points that align with his own, previously stated wishes. Hannity’s ratings, already tops in his slot, will likely get an extra jolt.

Hannity has not responded to criticisms of his show––yet. It's likely, his critics suggest, that he's presently fine-tuning his response for tonight's show.