The Trump Organization's New Golf Course Markers Are Probably Illegal, and It's the Most Trump Thing Ever 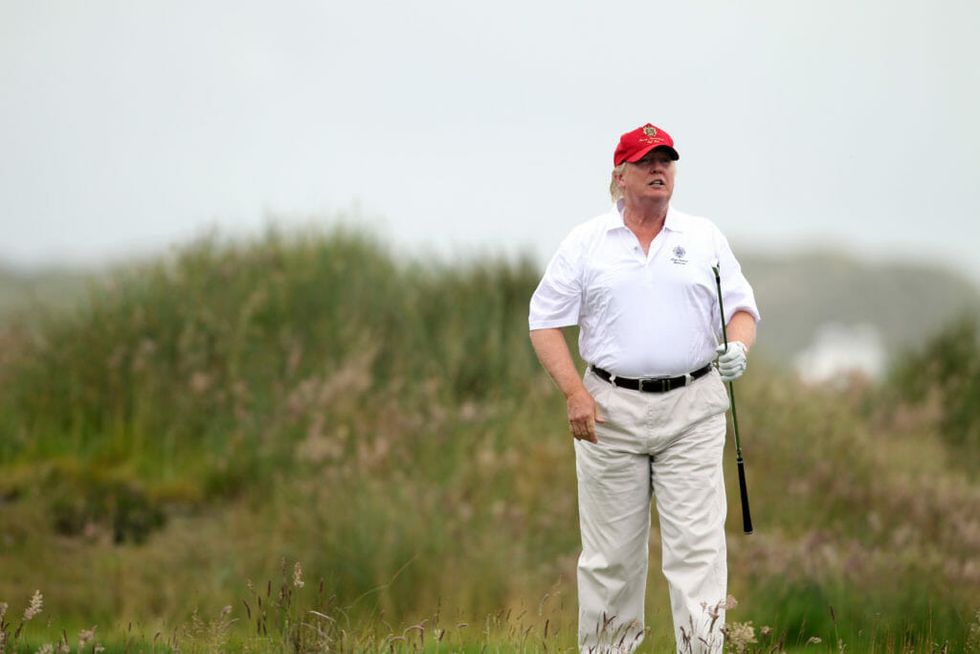 The Trump Organization may have violated federal law by ordering golf tee markers with the presidential seal to be placed on golf courses sporting the Trump name.

Federal statute 18 U.S. Code 713 states the presidential seal “or any facsimile thereof” may not be used for commercial purposes.

The Trump International ordered presidential seals to use as golf tee markers. The thing is: It's illegal to use… https://t.co/82jslWUBq4
— ProPublica (@ProPublica) 1520256424.0

According to exclusive reporting by ProPublica on Monday, a listener of the ProPublica/WNYC "Trump, Inc" podcast called in and brought the issue to the show's attention.

"In recent weeks, the Trump Organization has ordered the manufacture of new tee markers for golf courses that are emblazoned with the seal of the president of the United States," wrote Katherine Sullivan of ProPublica. "Under federal law, the seal’s use is permitted only for official government business. Misuse can be a crime."

Violating this law can be punishable by up to six months in federal prison.

@JayWolfeAuthor @ProPublica @ericuman It's literally the little signs next to the tee box with the hole number on i… https://t.co/FgiOrPwxMS
— Steph M (@Steph M) 1520261322.0

Selling memberships to Trump-branded golf courses that display the presidential seal "would be a misuse of government authority," said Kathleen Clark, a Washington University professor of government and legal ethics. And the tee markers are huge; each of them is a foot across, meaning they can't possibly be missed.

That President Donald Trump's [allegedly] former business would use the presidential seal to promote Trump's prestige as Commander-In-Chief should come as a shock to no one. Trump has spent 100 days playing golf in his first year in office—and Trump's habitual self-aggrandizement is nothing new.

People are getting fed up with Trump's golfing and incessant self-promotion.

@ProPublica @Fahrenthold WTF? How much more will the nation tolerate? This man is beyond bizzare. The only interest… https://t.co/Mz3FUCDU5X
— David Hylton (@David Hylton) 1520258010.0

Criticism and complete 'not at all shocked by this' comments flooded Twitter on Monday. Zaxdad said he's "surprised the chocolates on the pillows at his hotels aren't little presidential seals. Just wait."

Pocahontas noted that Trump seems to "have the time to order custom golf tee markers" instead of working to "protect our elections."

The presidential seal has been used on personal items, such as golf balls and personalized candy, but this case is different because a private company is using the seal for commercial gain. In 2005, the Bush administration forced The Onion to stop using the presidential seal in its publication.

Richard Painter, former George W. Bush White House ethics lawyer, and outspoken Trump critic said “if we had heard of a private company using it for commercial purposes, we would have sent them a nasty letter."