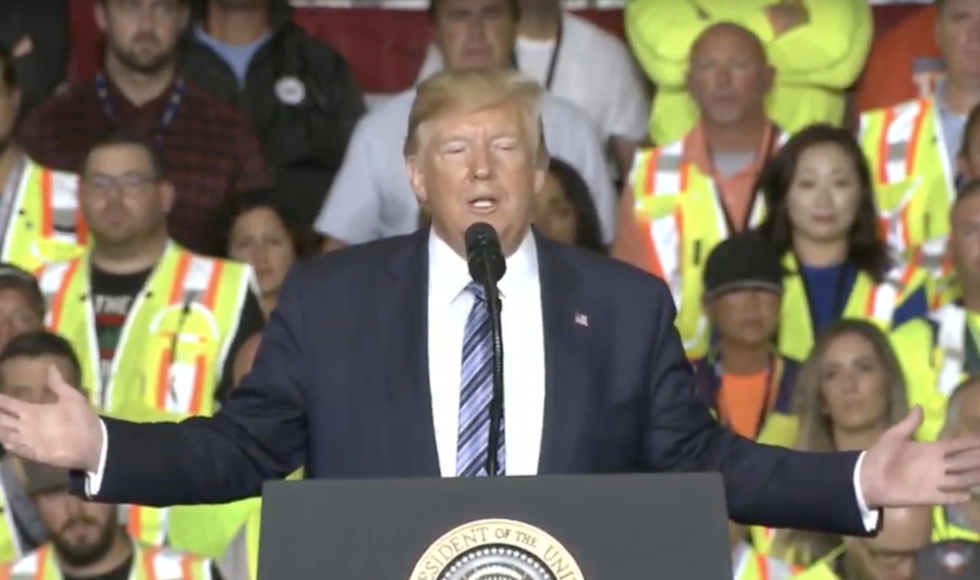 He was there on an official presidential visit, not a campaign event, but that didn't stop him from using the slur "Pocahontas" to refer to Senator Elizabeth Warren (D-MA), telling the workers to "make sure we win" in the 2020 presidential election, or from joking about the possibility of there being no election at all.

Imagining what his approval rating would be if he had a so-called "fair press," Trump said that there would be no point in holding the election at all, because he would be so favored.

Trump says in the video:

"Could you imagine if these people treated me fairly? The election would be over. Have they ever called off an election before? Just said, 'Look, let's go, go on, four more years.'"

It's ironic that Trump would make this claim, considering that his opponent in the 2016 presidential election, former Secretary of State Hillary Rodham Clinton, led him in virtually every poll ahead of the 2016 election. FiveThirtyEight reported that Clinton was almost three times as likely to beat Trump than the other way around.

Trump then went on to joke about serving a third and fourth term, touting it as a way to troll his critics.

Though Trump routinely jokes about serving past the two-term limit, joking about calling off the election entirely is a new one.

In fact, people began to think presenting the idea as a joke was for purposes of plausible deniability.

It may seem unthinkable to some thatTrump would attempt to remain in power through insidious measures. But much of what used to be unthinkable is now commonplace.

For example, Trump called CNN the "enemy of the people" last year after the network was sent a defective bomb by one of his supporters. Americans everywhere bristled at the rhetoric, but his use of the term "enemy of the people" to describe the press is now a mainstay at most of his campaign speeches.

He may be testing the waters, but it's we who decide if the water is fine.