As Federal Employees Go Without Pay During the Shutdown, Trump's Top Officials Are About to Get a Five Figure Raise

Sounds about par for the course. 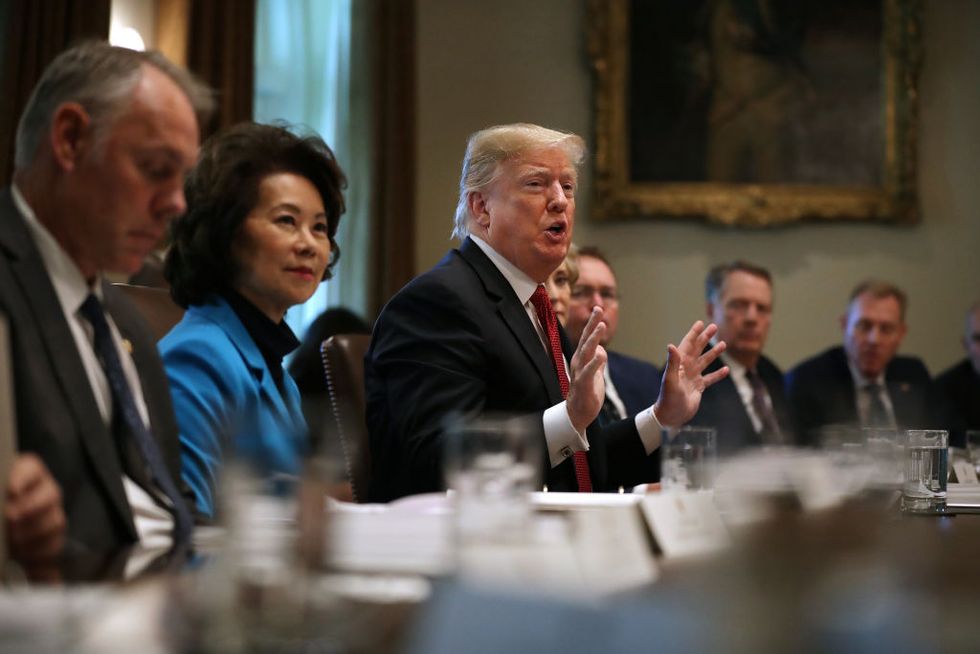 WASHINGTON, DC - OCTOBER 17: (AFP OUT) U.S. President Donald Trump (C) talks to reporters during a cabinet meeting with (L-R) Interior Secretary Ryan Zinke, Transportation Secretary Elaine Chao and others in the Cabinet Room at the White House October 17, 2018 in Washington, DC. Earlier this week Trump dispatched Secretary of State Mike Pompeo to Saudi Arabia and Turkey to meet with those countries' leaders about the disappearance of Saudi dissident and Washington Post opinion columnist Jamal Khashoggi. (Photo by Chip Somodevilla/Getty Images)

The federal government may be partially shut down, but that isn't stopping hundreds of President Donald Trump's political appointees from receiving annual raises of about $10,000 a year, according to documents issued by the Office of Personnel Management and experts in federal pay who've confirmed Cabinet secretaries, deputy secretaries, top administrators, and Vice President Mike Pence's raises are scheduled to go into effect beginning January 5.

The breakdown is as follows:

The Office of Personnel Management did not respond to requests for comment nor did the White House. The pay raises are expected to cost taxpayers $300 million over 10 years, according to a Senior Executives Association (SEA) analysis. The government shutdown has affected roughly 800,000 federal employees who have not received paychecks since the shutdown began two weeks ago.

Although the Democrat-led House passed a measure which continues the executive pay freeze as part of an effort to reopen the government, Senate Majority Leader Mitch McConnell (R-KY) has indicated he will not pass a bill the president likely won't sign. SEA's executive director Jason Briefel called the freeze a “politically driven policy that over time makes it harder to bring good folks to government," though he acknowledged lifting it “is definitely a slap in the face” to other federal workers.

Many, including Senators Doug Jones (D-AL) and Ed Markey (D-MA) have blasted the move.

Making sure to pay-off the ppl who'll help protect him from impeachment and indictment, criminal con-man Trump will… https://t.co/PiKNaS9NvR
— Bill Madden (@Bill Madden) 1546627331.0

At a time when federal workers are going without pay and struggling to make ends meet because of this president’s s… https://t.co/anZVIRwHqQ
— Our Revolution (@Our Revolution) 1546626600.0

The partial government shutdown was kicked off after the president opted not to sign a stopgap funding bill which would have averted a shutdown because he disagreed with Congress over funding for his proposed border wall on our nation’s southern border.

The shutdown is the fourth longest in U.S. history, and there is no end in sight, despite assurances from Democrats that they will pass funding bills as soon as they take office. The inauguration of the 116th Congress today marks the first time ever that a federal shutdown will extend into two different Congresses.

The president’s insistence on blaming Democrats for the shutdown contradicts his own statements. In December, he preemptively accepted ownership of a then-possible shutdown.

After meeting with Trump and other Congressional leaders privately, Senator Schumer said the president threatened to keep the government closed for "months or even years" until he gets his desired border wall funding ($5 billion). Trump later confirmed this at a press briefing in the Rose Garden after the meeting.

Nancy Pelosi, who yesterday reclaimed her position as Speaker despite internal opposition within her own party, described a "lengthy and sometimes contentious conversation with the president."

"We cannot resolve this until we open up government," Pelosi said.

The president had a different take, however.

“I thought it was really a very, very good meeting. We’re all on the same path," he said.

Despite those words, the president has continued to claim that the shutdown is a ploy orchestrated by Democrats to keep him from being re-elected in 2020.

In a tweet earlier today, the president suggested that Democrats "only want to impeach me because they know they can't win in 2020, too much success!"

As I have stated many times, if the Democrats take over the House or Senate, there will be disruption to the Financ… https://t.co/TdpoTpKce4
— Donald J. Trump (@Donald J. Trump) 1546607200.0

Shortly afterward, he alluded to impeachment again, saying he "won perhaps the greatest election of all time" while insisting upon his innocence regarding allegations that he and members of his administration colluded with the Russian government to win the 2016 presidential election.

How do you impeach a president who has won perhaps the greatest election of all time, done nothing wrong (no Collus… https://t.co/kAHlDXEU3X
— Donald J. Trump (@Donald J. Trump) 1546607780.0

Senator McConnell said the president will “designate his top people” to negotiate with Congress and end the shutdown.

“The news is that the president agreed to designate his top people to sit down with all the leaders’ staffs this weekend to see if we could come up with an agreement to recommend back to us — both to him and to the various leaders,” McConnell told reporters.

Asked if he would turn down the automatic raise coming his way during the government shutdown, ⁦@VP⁩ Pence says “ye… https://t.co/zAQ8J7iBCB
— Jeff Mason (@Jeff Mason) 1546632080.0