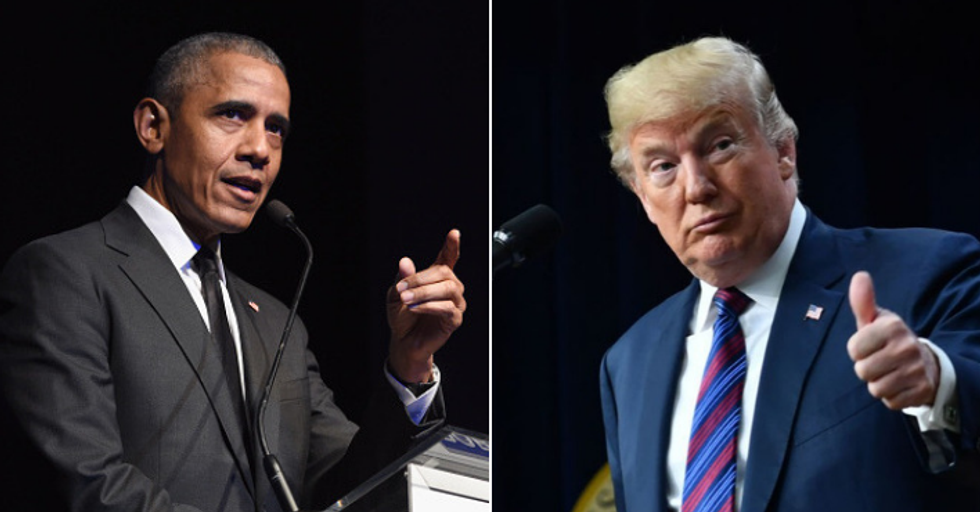 Never one to pass on an opportunity to brag about himself—even when it requires a bit of obfuscation—or to take a jab at President Barack Obama, President Donald Trump took the time to toot his own horn again on Monday.

During a moment with the White House press corps during a cabinet meeting, Trump stated:

However President Trump has demonstrated there are better ways to line your pockets while seated in the Oval Office than collecting the $400,000 paycheck.

"Let us remember that President Trump has spend [sic] more taxpayer money at his own resorts than President Obama took in salary in 8 years."

Let us remember that President Trump has spend more taxpayer money at his own resorts than President Obama took in salary in 8 years.
— Matthew Dowd (@Matthew Dowd) 1571701423.0

At the current presidential salary rate—$400,000—President Barack Obama would have made $3.2 million in eight years.

Since becoming President, almost a third of Trump's time has been at one of his resorts or commercial properties. The fees charged to his security details, aides and others in his entourage plus the White House press corps go directly into the Trump Organization's bank accounts.

@erikhalvorsen18 @matthewjdowd Id like to blame the press for this underreported story from day one. Golfing and en… https://t.co/LGPMWQVY92
— Mark Pelon Cohen (@Mark Pelon Cohen) 1571837802.0

In addition, government travelers including military personnel and the Vice President have reportedly been pressured to stay at Trump properties.

For example, Trump's Turnberry resort in Scotland got an estimated $184,000 from U.S. Air Force crews needing overnight accommodations while their planes were refueled. The resort was not on the recommended accommodations list prior to Trump becoming President.

Vice President Pence's trip to meet the President of Ireland should have included a stay in Dublin. But Pence stayed 181 miles away at the Trump International Golf Links & Hotel in Doonbeg—which was more money for Donald Trump from taxpayers. Travel to and from Dublin also cost taxpayers an estimated $600,000.

Prior to his proposed Doral Miami G-7 cancellation, Trump met at Mar-A-Lago and his golf courses and Trump Tower with foreign government officials, PACs and members of Congress. The Trump Organization did not donate accommodations, food or golf expenses meaning more money in Trump Organization accounts only because Trump is President.

Open Secrets, a watchdog organization,  estimates almost $20 million dollars paid to Trump properties by Trump related and US government entities alone. Over $14 million was paid to the Trump Organization from the Trump for President campaign.

The US Constitution mandates a salary be paid to the President and every President has accepted payment, including Trump.

The reasoning for the salary is two-fold:

While every President must accept payment, what the President does with the money after he's paid is up to him. George Washington refused payment for his military service, but accepted his $25,000 presidential salary.

People often mistakenly think these Presidents refused payment—the Constitution does not allow refusal of the pay.

Whether Trump indeed gives up his salary remains unproven. Trump previously shared photos of checks from the Trump Organization as proof he returned the salary he draws.

The checks prove he does in fact deposit his presidential salary—not refuse it as he frequently claims—then cuts a check. But the pictured checks were made out to specific government departments and do not indicate being deposited or cashed.

The federal government only accepts checks made out to the US Treasury unless payment is for specific services rendered by an agency—due to laws regarding acceptance of gifts by government entities. Therefore—by regulation and perhaps design—Trump's return of his salary by check as shown in his photos would be a worthless piece of paper never transferring his salary back to the federal coffers.

Only a look at the Trump Organization expenses would prove Trump's claim. A check—not marked cashed or deposited—made out to a federal entity that cannot accept the funds proves nothing.

The US Treasury nor the Trump Organization has ever confirmed the funds transfer of Trump's salary back to the government.

The book Commander in Cheat: How Golf Explains Trump is available here.