Trump Just Proposed How To Easily Solve The Opioid Epidemic 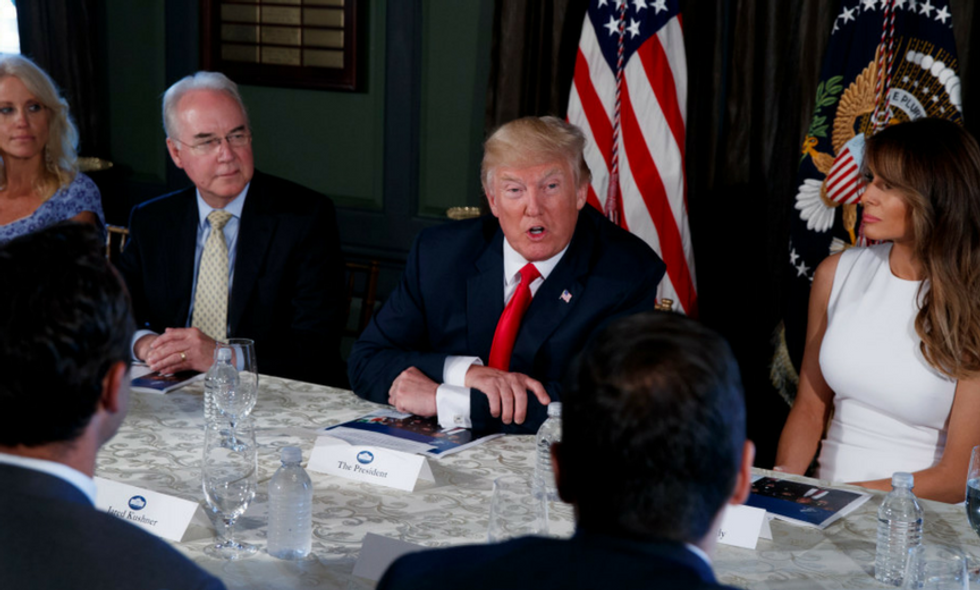 On Tuesday, as Donald Trump sought to discredit the notion that he was merely on vacation at his Bedminster, New Jersey golf club for the month of August, the President held a briefing on the nation's deadly opioid epidemic.

Joined by his Health and Human Services Secretary, Tom Price, and other administration officials, Trump offered his theory for how we're going to beat the epidemic, in typically Trumpian simplified terms.

“The best way to prevent drug addiction and overdose is to prevent people from abusing drugs in the first place...So if we can keep them from going on and maybe by talking to youth and telling them: No good, really bad for you in every way. But if they don’t start, it will never be a problem.”

Trump also made clear he felt law enforcement was key to solving the crisis.

"Strong law enforcement is absolutely vital to having a drug-free society," Trump said. "I'm confident that by working with our health care and law enforcement experts we will fight this deadly epidemic and the United States will win."

Trump stopped short of calling for an emergency declaration, which was the recommendation of the White House's Commission on Combating Drug Addiction and the Opioid Crisis when it met last week.

Secretary Price explained that while they didn't feel an official declaration was necessary at this time, they are treating this crisis with the urgency it deserves.

Trump's decision not to declare a state of emergency to free up federal funds to deal with the crisis, was criticized by health experts.

Keith Humphreys, an addiction specialist at Stanford University, said the commission “made good public health recommendations” but he was not surprised Trump did not adopt them.

“[I]t’s hard to get an arsonist interested in the possibilities afforded by a fire hose,” Humphreys added. “Everything a public health emergency declaration would allow Trump to do he could have done already in the past 8 months simply by working with Congress on the required legislation. But he didn’t do that, indeed he worked to cut the very public health resources an emergency declaration would allow him to expand.”