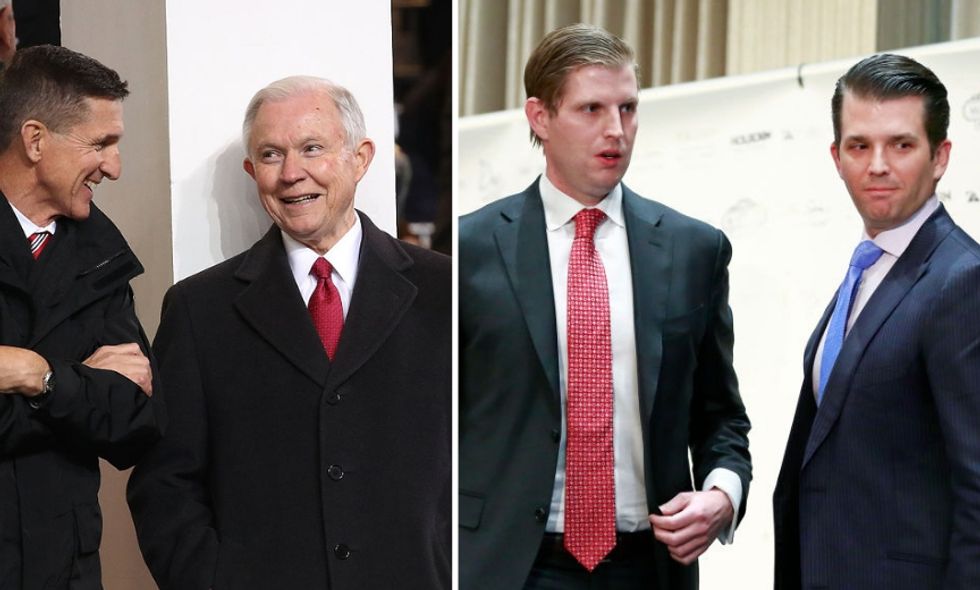 The House Judiciary Committee just launched a major investigation into Donald Trump and his associates, alleging obstruction of justice, corruption, and abuses of power.

A whopping 81 people and entities in Trump's orbit were served document requests, including (but not limited to):

Not to mention virtually every organization Trump runs or has run:

House Judiciary Chairman Jerrold Nadler (D-NY), who is is spearheading the investigation, said:

"Over the last several years, President Trump has evaded accountability for his near-daily attacks on our basic legal, ethical, and constitutional rules and norms. Congress must provide a check on abuses of power."

The Trump administration's alleged abuses of power include criminal misuses of official positions for personal gain, attacks on the press, and attempts to misuse the power of the Office of the Presidency. "We will act quickly to gather this information, assess the evidence, and follow the facts where they lead with full transparency with the American people," said Nadler. "This is a critical time for our nation, and we have a responsibility to investigate these matters and hold hearings for the public to have all the facts."

NEW: "I cooperate all the time with everybody,” says @realDonaldTrump in response to a question about the new… https://t.co/CQ6JrHsmpH
— Geoff Bennett (@Geoff Bennett) 1551721169.0

When asked whether he would cooperate with the investigation, Trump said "I cooperate all the time with everybody."

The investigation comes hard on the heels of former Trump lawyer Michael Cohen's explosive testimony, in which he called the president a racist, a liar, and a cheat.

Twitter's talking about the possibility of impeachment.

@realDonaldTrump You are by no means a victim. This is a rightful investigation into your many criminal acts. You s… https://t.co/l9ZbHTqVRx
— Beth Moore (@Beth Moore) 1551719033.0

@kylegriffin1 @MSNBC If it's enough to put someone in prison it ought to be enough to impeach the President of the United States.
— Per_Bast (@Per_Bast) 1551735964.0

While Democratic lawmakers have remained reticent in regards to commencing the process of impeachment, the calls from the public to start the process have grown louder and louder since Trump's inauguration.

Those served with the document requests will have until March 18 to respond before the House starts sending out subpoenas.