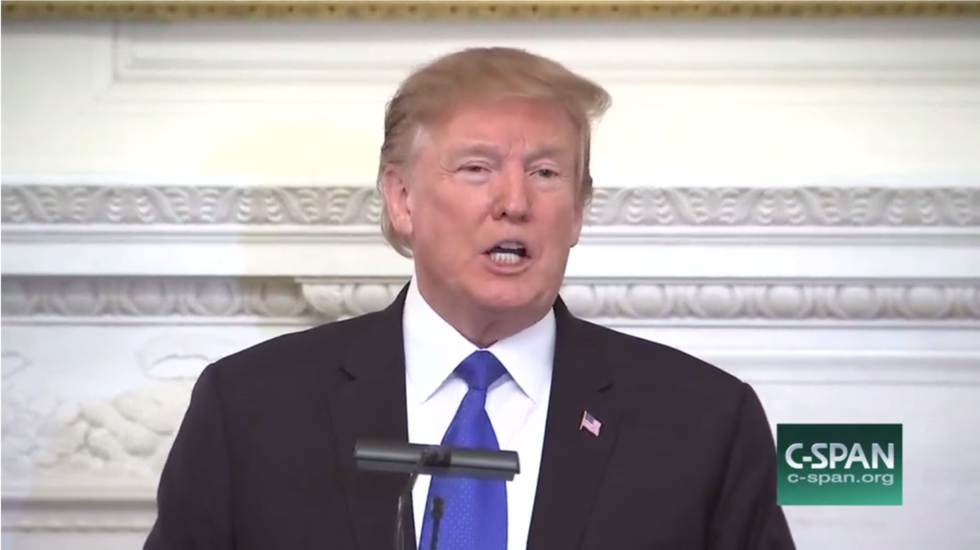 Screenshot of President Trump delivering remarks on the economy, national security and border security before governors attending a business meeting at the White House.

President Donald Trump is currently in talks with representatives of China to reach a trade agreement that would mitigate the effects of increased tariffs between the two countries.

Though officials seem optimistic about the talks, some were uneasy when Trump imitated Chinese President Xi during a business meeting at the White House.

The president's remarks came during a speech about claims that a wall at the southern border would have a significant effect on drug trafficking from Mexico into the United States. Trump recalled a meeting with President Xi.

"So you have 1.4 billion people, and you don't have a drug problem? 'That's right, no drug problem.' I said what do you attribute that to? 'Death penalty. Quick trial.'"

He then reiterated Xi's words in what sounded like an attempt to mimic Xi's voice:

"They have what's called a 'Quick trial.'"

The president's imitation was met with enough silence to hear a pin drop. Twitter, however, wasn't keeping quiet.

@atrupar You can literally hear the audience gasping and murmuring at this insanity.
— Meghan (@Meghan) 1551129062.0

Trump went on to brag that it took him "one minute" to convince the Chinese president that criminalizing the sale of Fentanyl to the United States would save "many lives."

It's undoubtedly true that criminalizing the sale of Fentanyl from China to the U.S. would save lives - but what does that have to do with the president's border wall?

BBC reporter Tara McKelvey had some questions about Trump's "death penalty, quick trial" comments - but her concerns are less about the mockery and more about what that says about the president's justice policies.

I wondered whether Trump wished that the US would adopt the same approach to drug offenders – a speedy trial and execution – that was used in China. His remarks were jarring - given the platitudes he’d just expressed about criminal justice reform.

I wondered whether Trump wished that the US would adopt the same approach to drug offenders – a speedy trial and ex… https://t.co/kJ676b4eJO
— Tara McKelvey (@Tara McKelvey) 1551107963.0

Mockery or not, Trump's admiration of President Xi's death penalty for drug dealers—especially after only a hasty trial—is disturbing - and for this administration, that's saying a lot.