The Day After: Trump Election Draws Protests, Calls for "CalExit" 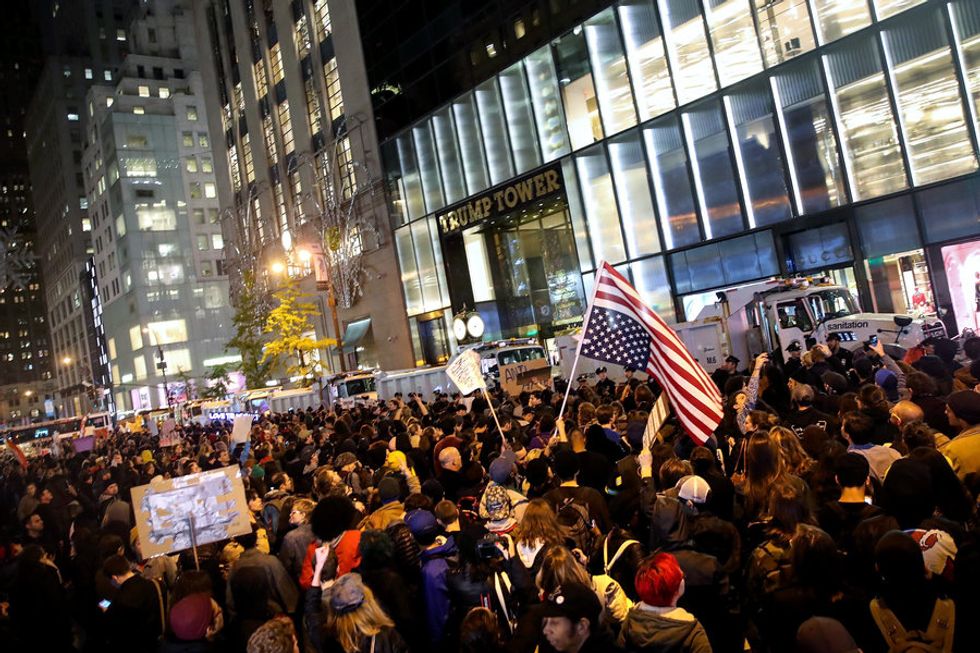 Americans shocked by the election of Donald Trump made their opposition known through large-scale protests, walkouts, and marches across major US cities yesterday. Minorities, LGBTs, the disabled, and women fearful of what a Trump presidency will mean for their lives and communities helped lead the actions in the San Francisco Bay Area, Los Angeles, Seattle, Portland, Pittsburgh, Chicago, and New York, among other cities in predominantly blue states that voted heavily against Trump.

Thousands of protesters in Chicago took to the streets to yell "Not my President" and "F--- Trump" outside Trump International Hotel & Tower. In New York, thousands of demonstrators chanted and banged drums as they marched up Sixth Avenue.

NBC New York reported more than 30 arrests, most of them for disorderly conduct.

Meanwhile, #CalExit trended high across Twitter, as many in California called for a referendum for the world's sixth largest economy to follow Brexit and withdraw from  political union with the United States.

Noting California's growing cultural shift away from the rest of the country and burgeoning  economic success, backers of the idea under the "Yes California Independence Campaign" gathered in the state's Capitol and vowed to place the measure on the 2018 ballot.

The protests and CalExit present unprecedented challenges for the incoming Trump administration, which won an electoral college majority but lost the popular vote due to lopsided Democratic victories in states like California, where his racist and misogynistic messaging already has led many to declare, "He is not my president." Word that Trump would appoint hardline conservatives such as Newt Gingrich and Sarah Palin to key cabinet positions may only further intensify opposition. A full list obtained by BuzzFeed News reveals that New Jersey Governor Chris Christie is tapped for Secretary of Commerce, and neurosurgeon Ben Carson is listed as a potential candidate to be the Secretary of Education and Secretary of Health and Human Services.
2016 Presidential Election 2016 Presidential Race Donald Trump Election president protests