Of course he is. 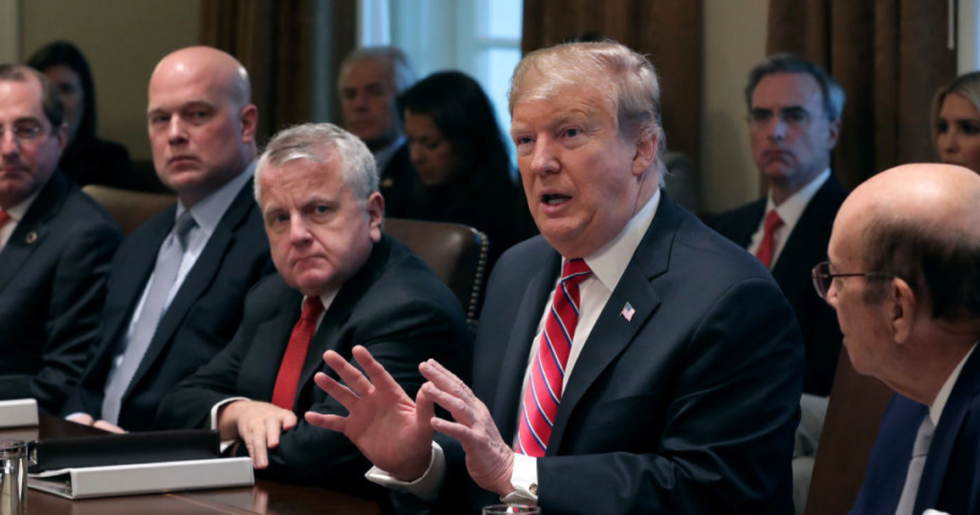 WASHINGTON, DC - FEBRUARY 12: U.S. President Donald Trump talks to reporters during a meeting with members of his cabinet, including (L-R) Health and Human Services Secretary Alex Azar, acting Attorney General Matthew Whitaker and Commerce Secretary Wilbur Ross, in the Cabinet Room at the White House February 12, 2019 in Washington, DC. Trump said he was not happy about the compromise legislation agreed to by Republicans and Democrats that would prevent a new partial federal government shutdown but said he would accept the deal. (Photo by Chip Somodevilla/Getty Images)

The Trump administration will assemble an ad hoc working group of climate skeptic scientists to reassess the government's analysis of climate science and the effect of fossil fuels on the planet. The information came from three administration officials who agreed to speak on condition of anonymity.

The National Security Council initiative "would include scientists who question the severity of climate impacts and the extent to which humans contribute to the problem, according to these individuals, who asked for anonymity to discuss internal deliberations," according to The Chicago Tribune, and "would not be subject to the same level of public disclosure as a formal advisory committee," bypassing The Federal Advisory Committee Act, which stipulates that such committees adhere to rules championing open meetings, chartering, public involvement, and reporting.

Although the plan has not been finalized, the officials said deputy national security adviser Charles Kupperman relayed that President Donald Trump was "upset" that his administration had released the National Climate Assessment, which federal law mandates must be published yearly. The decision to hire skeptics who could scrutinize federal climate reports is part of an effort to stymie Democrats, whom Kupperman said are using last year's report to bolster their calls for a Green New Deal, a much-talked-about carbon-slashing infrastructure plan.

An administration official said the president was looking for "a mixture of opinions" and disputes the National Climate Assessment.

"The president wants people to be able to decide for themselves," the official said.

The news prompted many, including former Trump biographer Tony Schwartz, to criticize the Trump administration for mounting its most aggressive denial of climate change yet.

Trump and White House searching for fourth rate scientists who are willing to deny the reality of climate change. A… https://t.co/dnmcWRlAfd
— Tony Schwartz (@Tony Schwartz) 1551053186.0

Scientists in the Trump administration and around the word agree that climate change is an existential threat and w… https://t.co/REZikZspnr
— Ed Markey (@Ed Markey) 1551113557.0

Trump is now setting up a panel that appears designed to counter his own administration's conclusion that climate c… https://t.co/r0cw40VosI
— Greg Sargent (@Greg Sargent) 1550752936.0

This isn't just negligence, it's criminal obstruction. People are dying because of climate change, and it's about t… https://t.co/C3ZDdiTkax
— Calvin (@Calvin) 1551109920.0

Speaking to Axios, NASA climate scientist Kate Marvel said the Trump administration's latest proposal "is like assembling a panel of 'gravity skeptics' who insist it’s safe to jump off tall buildings, except in this case they want to take us all with them."

Retired Rear Admiral David Titley, who served as oceanographer of the Navy and chief operating officer at the National Oceanic and Atmospheric Administration and currently sits on the advisory board of the Center for Climate and Security, issued a withering criticism of his own:

"I never thought I would live to see the day in the United States where our own White House is attacking the very science agencies that can help the president understand and manage the climate risks to security of today and tomorrow. Such attacks are un-American."

The committee will likely include physicist William Happer, who last week it emerged, has been tasked with assessing the potential harm of climate change.

Happer’s comments resurfaced after The Washington Post obtained a document revealing that he would be appointed to the Presidential Committee on Climate Security.

Happer also believes that more C02 in the atmosphere would be beneficial for the world at large, a belief he espoused in 2015 after members of the environmental campaign group Greenpeace posed as oil company representatives and persuaded him to write a scientific paper.

“More CO2 will benefit the world,” Happer said at the time. “The only way to limit CO2 would be to stop using fossil fuels, which I think would be a profoundly immoral and irrational policy.”