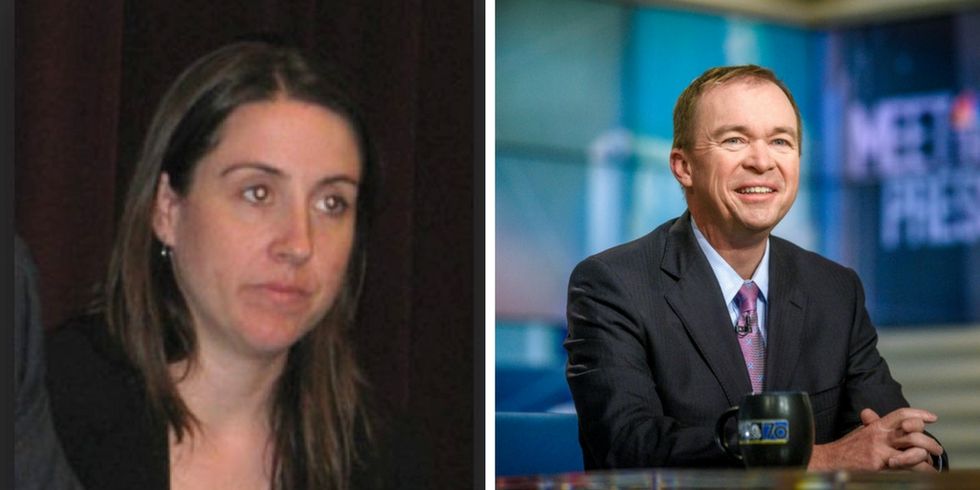 Leandra English, the deputy director of the U.S. Consumer Financial Protection Bureau (CFPB) who was named acting director by outgoing director Richard Cordray last week, filed a lawsuit against President Donald Trump and his pick to lead the watchdog agency. Last Friday, Trump named White House budget director Mick Mulvaney as interim director. The lawsuit was filed on Sunday after she was threatened by the White House to not show up for work as acting director this morning.

As head of the Office of Management and Budget, Mulvaney defended cuts to the elderly and the arts as "compassionate," and in May flat out denied a $2 trillion mathematical error in Trump's budget proposal. While a U.S. Representative in Congress, Mulvaney voted in favor of killing the CFPB, arguing it has too much power and issues unduly harsh regulations. He has worked alongside Trump to roll back some of the agency's rules.

Many fear that Trump's move to appoint Mulvaney is intentionally aimed at dismantling the agency from within, just as the president is doing with the Environmental Protection Agency. "Wall Street hates it like the devil hates holy water. And they're trying to put an end to it with Mr. Mulvaney stepping into Cordray's spot," said Senator Dick Durbin.

In the lawsuit, Leandra English called herself the “rightful acting director” of the CFPB and asked for the temporary restraining order to prevent Trump from appointing Mulvaney, and to bar the latter from taking control of the consumer fraud protection agency. Filed in U.S. District Court in Washington, the suit argues that Trump overstepped his legal authority in attempting to appoint Mulvaney to the post. English maintains that Cordray had legal grounds to name his successor until a full-time director is named by Trump and confirmed by the Senate.

“The President’s purported or intended appointment of defendant Mulvaney as Acting Director of the CFPB is unlawful,” the lawsuit says.

In another statement, English added: “The talented and hard-working CFPB staff stand up for consumers every day. As Acting Director, I am filing this lawsuit to stand up for the CFPB."

"The President's attempt to install a White House official at the head of independent agency — while allowing that officer to simultaneously serve in the White House — is unprecedented," said English's lawyer, Deepak Gupta, in the statement on Sunday. "The law is clear: Ms. English is acting director of the Consumer Financial Protection Bureau until the Senate confirms a new director."

Senator Chuck Schumer released his own statement on Twitter, supporting Leandra English and the legal order of succession:

"The process for succession laid out in Dodd Frank is clear: Leandra English, not Mick Mulvaney, is the acting dir of @CFPB. By attempting to install Mr. Mulvaney as director, the Trump admin is ignoring the established, legal order of succession that we purposefully put in place."

The process for succession laid out in Dodd Frank is clear: Leandra English, not Mick Mulvaney, is the acting dir o… https://t.co/JpnS7aXo9h
— Chuck Schumer (@Chuck Schumer) 1511735922.0

Senator Bob Menendez echoes Schumer, citing the Dodd-Frank Act, signed into federal law by President Barack Obama on July 21, 2010. In simplest terms, the Dodd-Frank Act is a law that places regulations on the financial industry.

"Just because you don’t like Dodd-Frank doesn’t mean you can ignore it. The Dodd-Frank Act is clear—in the absence of a director, the deputy director of @CFPB is in charge. That means Leandra English."

A Power Struggle Over the Agency that Protects Consumers from Fraud

The White House disagrees with the lawsuit, releasing a statement defending Trump's decision to appoint Mulvaney:

"The administration is aware of the suit filed this evening by Deputy Director English. However the law is clear: Director Mulvaney is the Acting Director of the CFPB," said White House press secretary Sarah Sanders in a statement.

"Now that the CFPB's own General Counsel — who was hired under Richard Cordray— has notified the Bureau's leadership that she agrees with the Administration's and DOJ's reading of the law, there should be no question that Director Mulvaney is the Acting Director. It is unfortunate that Mr. Cordray decided to put his political ambition above the interests of consumers with this stunt."

“Director Mulvaney will bring a more serious and professional approach to running the CFPB," Sanders added.

Leandra English has been warned that if she steps into the CFPB Monday morning under the assumption of acting director, that she would be acting without authority; furthermore, that she would be in violation of laws yet to be named.

Interesting. WH sends an implicit warning to CFPB Acting Dir. Leandra English that she could be in violation of law… https://t.co/MPPf5SQk6j
— Christina Wilkie (@Christina Wilkie) 1511748614.0

Despite the warning, CNN reports both English and Mulvaney showed up for work this morning, both as "acting director" of the CFPB, and that both "issued dueling emails to staff" in their separate attempts to assert authority and control of the agency.

Senator Elizabeth Warren, who proposed the idea of the agency while still a bankruptcy professor at Harvard Law School, believes Trump's actions will intentionally destroy an agency that has returned billions to working families who were cheated by Wall Street.

The only thing that will turn the @CFPB into a disaster is for @realDonaldTrump to ignore Dodd-Frank & name an acti… https://t.co/NPQtuIqpHQ
— Elizabeth Warren (@Elizabeth Warren) 1511653010.0