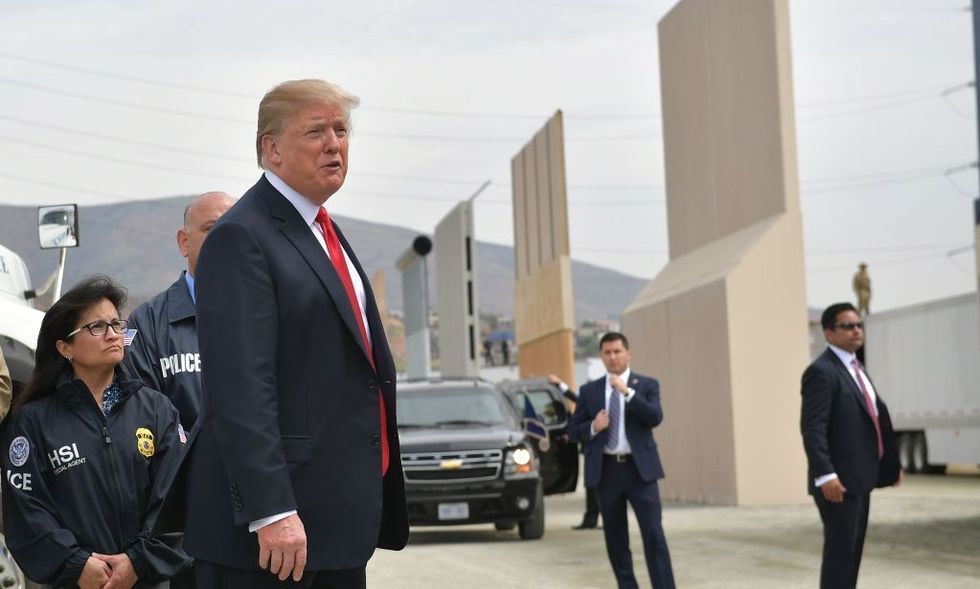 Back in March, President Donald Trump took a trip to Otay Mesa near San Diego to look at various prototypes for his border wall. A sample section of eight options were built on the site at the cost of $300,000-$500,000 each—with the Department of Homeland Security (DHS) paying the $2.4 million-$4 million bill.

Back in September 2017, DHS awarded eight contracts to companies to develop prototypes for the Trump administration’s proposed wall along the nearly 2,000 mile US-Mexico border. Contracts were split evenly into concrete and non-concrete walls.

If possible, DHS could eventually incorporate some or all of these display models in the finished border wall infrastructure. For now, the multi-million dollar project acts as the banner photo for the Customs and Border Patrol (CBP) website.

In addition to the Otay Mesa set of prototypes, contractors built eight duplicates at an undisclosed location so DHS could conduct testing of the walls for: breaching, climbing, digging, stability and other safety protocols according to the original plans. DHS paid another $2.4 million-$4 million for those as well.

The next phase began with teams from CBP and the US military's Special Operations Command and members of the U.S. Marine Corps. That step did not go so well according to a heavily redacted report released by CBP.

A representative for CBP stated—in defense of the prototypes failing grade—that specialized equipment and planning went into the successful breaches. But Andrea Guerrero of Alliance San Diego, a non-profit supporting social equality and immigrants, stated:

"It's troubling because this wall is a wasteful wall, a harmful wall and an irresponsible wall. The report confirms what we've always believed: that this is a bad idea."

The tactical teams tried to breach, scale or otherwise penetrate the walls in a real-life scenario. However the report makes no mention of tunneling or digging tests despite original plans and the documented frequency of this method in real life situations.

In a CBP statement issued Monday, they clarified:

"As is the case with any barrier, the eight border wall prototypes were not and cannot be designed to be indestructible. Rather, this capability enables Border Patrol to impede or deny efforts to scale, breach, or dig under such a barrier, giving agents time to respond."

CBP did not include any information on how the multi-billion dollar proposed wall improves over the walls already along the southern border that also enable Border Patrol to impede or deny efforts to scale, breach, or dig under such a barrier, giving agents time to respond.

The project already at $20 million for just the prototypes requires significant improvements before any final decisions or construction plan implementation. But with all prototypes failing the "impenetrable" test, some may need to be scrapped completely.

But how much will that cost?

A General Accounting Office (GAO) report released this summer warned of underestimated costs for the proposed border wall. Prototypes in Otay Mesa stand on flat ground, but the 2,000 mile border covers a great variety of topography.

"The wall is never going to be all end all, but what it is able to do is it able to slow down illegal traffic crossing the border and gives the border patrol not only a safer environment to work in, but it also allows us time to identify and interdict that traffic and deploy appropriate resources to deal with it."

"What I think we'll see is a hybrid of several different designs taking the best features of each."

But the trial and error is coming at taxpayer expense, which is unusual in and of itself.

When the Defense Department (DoD) decides they need a new military aircraft or ship design, contractors produce and test prototypes on their own dime. Then their tested and completed prototypes compete to win the eventual contract for design and building.

Research and development for military prototypes is funded by the contractors competing for the job, not the government. So why is DHS going against convention? Why are contractors not performing all R&D to produce prototypes that will fully meet the needs specified by DHS, then pitting their fully tested design against the others?

DHS took over the expense of the design and testing phase on a project already flagged by GAO as being more expensive than originally anticipated. And with the complete failure of all prototypes, the $20 million already spent on this phase is essentially wasted.

In addition to funding improved or redesigned prototypes, there are other costs GAO flagged that the Trump administration did not include in their original wall cost analysis.

In addition to seizing land from private individuals with property near the border, the Tohono O'odham Nation's traditional homeland straddles the border with Mexico. The tribe stated many times they will not allow the wall to be built on their sovereign land.

The Tohono O'Odham work with the CBP and already greatly reduced border incursions through their land. They maintain, "if it ain't broke, don't fix it."

After several attacks by those in favor of the wall misrepresenting their views, the tribe created a video to explain their stance against the wall.

And none of this addresses the effectiveness of a wall when statistically, more people enter the United States through conventional transportation—like planes, boats and buses with valid visas—than walk across the southern border.

Most enter the United States legally on temporary work or student or tourist visas. When their visas expire, they remain in the US.

While "Build the Wall" played well in rallies for Trump, the cost, the lack of effectiveness and now the failure of his prototypes is proving that reality is more difficult than the President ever imagined.