Now Even Trump's State Department Is Distancing Itself From Rudy Giuliani 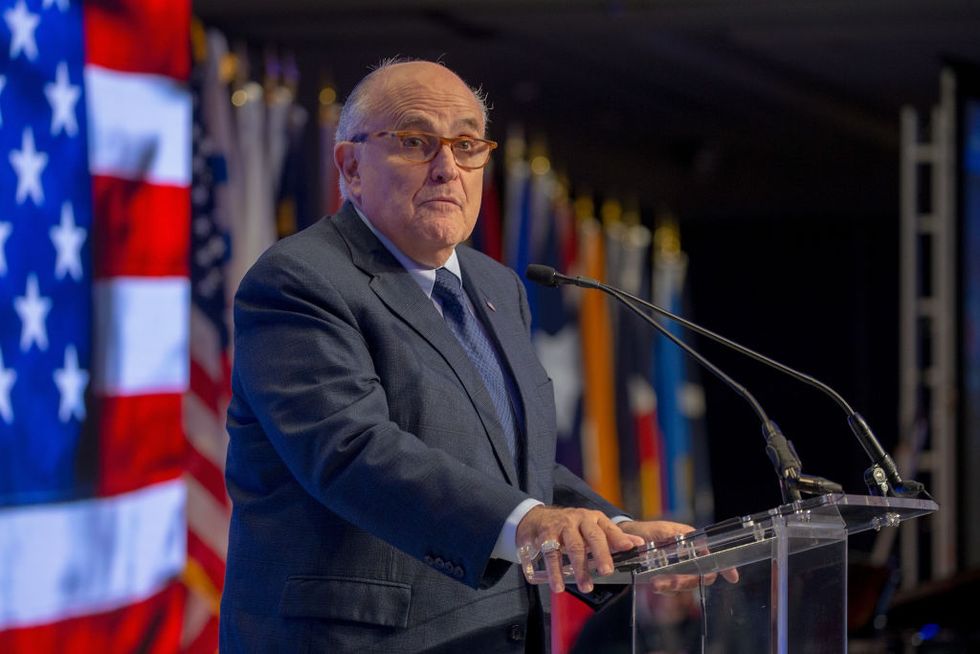 WASHINGTON, DC - MAY 05: Latest appointee to President Donald Trump's legal team and former Mayor of New York City Rudy Giuliani speaks at the Conference on Iran on May 5, 2018 in Washington, DC. Over one thousand delegates from representing Iranian communities from forty states attends the Iran Freedom Convention for Human Rights and Democracy. (Photo by Tasos Katopodis/Getty Images)

President Donald Trump's administration has sought to distance itself from Rudy Giuliani, who, as the newest member of the president's legal team, has made often dramatic and contradictory statements which appear to have only worsened public opinion of an already highly contentious leadership as the special counsel's investigation into Russian meddling rages on.

The State Department called out Giuliani's statements on Iran and North Korea, saying he doesn't speak for the Trump administration on foreign policy. Giuliani, a former New York City mayor, has often confused both Washington insiders and the public alike over whether he's simply disclosed information he's been told by the president, stating government policy, or giving his own interpretation of events as they unfold.

"He speaks for himself and not on behalf of the administration on foreign policy," State Department spokeswoman Heather Nauert said yesterday.

"We got Kim Jong Un impressed enough to be releasing three prisoners today," Giuliani said at the time.

Although the president has hinted that American diplomats could attain the release of the prisoners in the future, the U.S. government has not made a formal announcement, and the detainees have not yet been released as predicted by Giuliani. Giuliani's statements raised ire in Washington amid fears that he was jeopardizing the government's highly sensitive talks with the North Korean government to plan a historic summit between Kim Jong Un and Trump.

Giuliani also courted controversy over the weekend when he spoke to a group that supports the overthrow of Iran's government and said that the president was "committed" to regime change in Iran. Trump is highly critical of Iran, and has sought to withdraw the U.S. from the 2015 nuclear deal, but neither he nor his administration has ever called for overthrowing the Iranian government.

According to Ned Price, a former spokesman for the White House National Security Council in the Obama administration, Giuliani's statements raise the risk of undermining the U.S.'s relationship with world leaders.

"You have foreign governments reading the tea leaves based on what people like Giuliani are saying," Price said. Of Giuliani's statements on North Korea, he added: "Not only does it put their families in this absolutely painful position, but in the worst event it could actually be counterproductive if the North Koreans think we're spiking the football."

Giuliani's behavior has proven a proverbial thorn in the side of an already embattled president who has tried––and failed––to rein in both Special Counsel Robert Mueller's probe into Russian meddling and accounts over the $130,000 payment to adult-film actress Stephanie Clifford, better known as Stormy Daniels. The president has said Giuliani didn't "have his facts straight" on that front.

A Politico report reveals that the president has voiced his displeasure with Giuliani to White House aides:

The president has been griping to associates that Rudy Giuliani, his new personal attorney, has failed to shut down the Stormy Daniels hush money saga. And he has expressed frustration that Giuliani’s media appearances are raising more questions than they are answering, turning the story into a days-long drama capped by the admission Sunday that the president may have made similar payments to other women.

For now, White House aides said, Giuliani still has a direct line in to Trump – the two speak almost daily – and nobody in the West Wing is eager to insert themselves between the two irascible New Yorkers by yanking Giuliani off TV. But some aides said they expect the president to fire Giuliani if his behavior doesn’t change.

Giuliani "pushed back against the notion that the president is unhappy with his performance" in a phone interview with the news outlet yesterday.

“If I’m not up to it, I don’t know who is,” he said. “I know the Justice Department better than just about anyone.”

Prominent political voices have also taken to social media to weigh in on Giuliani's performance.

Giuliani's public statements prompted MSNBC host Joe Scarborough to suggest that the reason why the president didn't add him to his legal team sooner was that Giuliani was “drinking too much.”

“Everybody around Donald Trump said he was drinking too much — Donald Trump suggested as much — that was two years ago,” Scarborough said.

Scarborough then criticized the president for hiring Giuliani anyway.

“It’s not 3-D chess. That’s not even checkers. That’s a monkey throwing poo against the wall, and it doesn’t usually turn out well," Scarborough said.