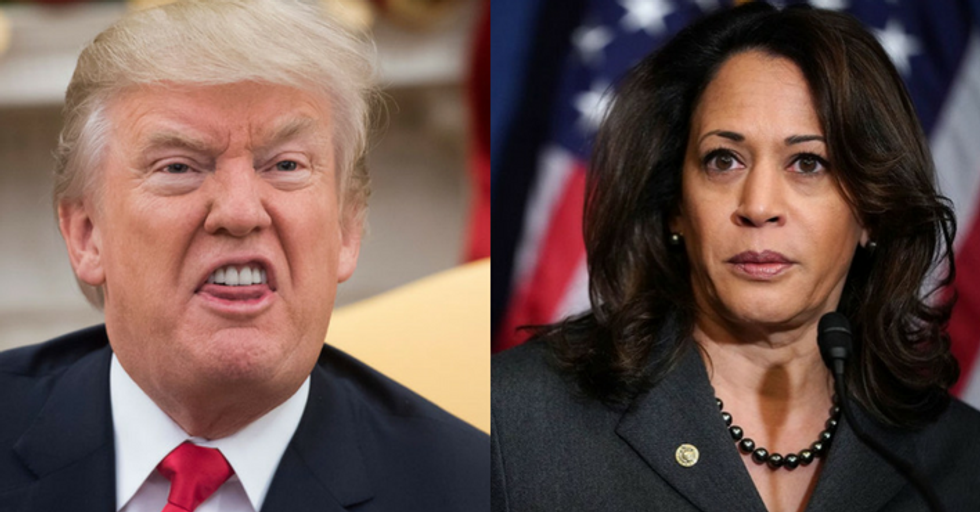 It was a definite departure from the norm. President Donald Trump usually uses his own personal Twitter account to attack members of congress.

The reason for the attack on Harris? The Democratic Senator attended the Los Angeles Families Belong Together march over the weekend and has called for reforms to the policies and practices of ICE.

But Harris easily identified the source of the attack on her integrity and record as a prosecutor and former Attorney General of California. It did not take her long to respond.

As a career prosecutor, I actually went after gangs and transnational criminal organizations. That's being a leader… https://t.co/A1TZTryFQj
— Kamala Harris (@Kamala Harris) 1530566280.0

My record speaks for itself: → Arrested members of drug trafficking organizations that smuggled in narcotics to th… https://t.co/VT3qmbMi2I
— Kamala Harris (@Kamala Harris) 1530574800.0

In 2010, Harris was elected California's Attorney General and reelected in 2014. On November 8, 2016, she became a United States Senator, becoming California's third female Senator.

Harris, whose term in the Senate won't end until 2023, also reached out via email to her supporters about the false allegations made against her by the Trump administration.

In her email, Harris states:

"A few moments ago, this White House used its official, taxpayer-funded Twitter account to launch a completely false attack on me..."

Let me be very clear: As a career prosecutor, I actually went after gangs and transnational criminal organizations. That's being a leader on public safety. What is not, is ripping babies from their mothers."

Harris ended the email with a renewed pledge to continue to fight for the rights and needs of her constituents and all people in the United States.

When our kids and grandkids ask you where you were and what you did at this moment in time, what will your answer be? Mine will be that I did everything I could to stop this Administration’s reprehensible agenda."

At the bottom of all correspondence from Harris' campaign appears this very relevant quote from civil rights leader Coretta Scott King:

Freedom is never really won. You earn it and win it in every generation." ~ Coretta Scott King

@shannoncoulter @KamalaHarris I am getting the reason why people think Trump and his admin are racists, they can't… https://t.co/wBDdblQ994
— David Weissman (@David Weissman) 1530567978.0

And questions were again raised about the use of an official government account to attack members of congress.