The Senate Just Confirmed Donald Trump's Latest Pick to Run the Environmental Protection Agency, and He Might Be Trump's Worst Cabinet Pick Yet 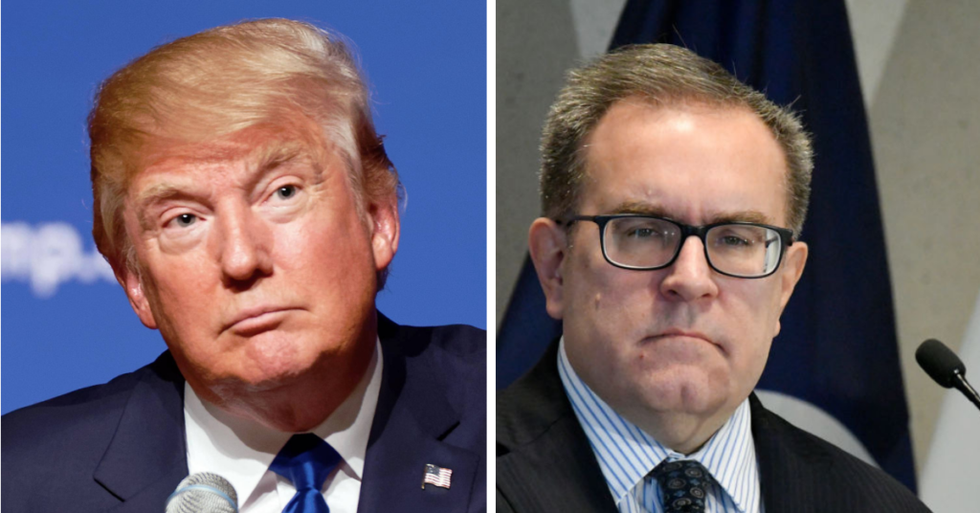 Wheeler's confirmation was swiftly criticized by Democrats who used the vote "as an opportunity to to call for greater action on climate change, with more than half-a-dozen senators speaking to a nearly empty chamber about why the federal government should press for steeper cuts in greenhouse gas emissions," according to one report.

“It ought to tell us a lot that the Republicans put up a coal lobbyist to represent the people of America, leading the Environmental Protection Agency,” said Senator Sheldon Whitehouse (D-R.I.).

Other legislators concurred, saying Wheeler's appointment is further evidence of the Trump administration's choice to dig its heels in the sand over climate change despite the scientific consensus that the phenomenon poses a grave threat to life as we know it.

We need a strong EPA that will defend the right of every American to drink clean water & breathe clean air. That's… https://t.co/eoBR9OPKm4
— Kamala Harris (@Kamala Harris) 1551375786.0

Every Democrat voted against Andrew Wheeler to be @EPA's Administrator He built a career as a lobbyist for big pol… https://t.co/XiUzDd06Fh
— Chuck Schumer (@Chuck Schumer) 1551410834.0

There are a number of reasons I voted against Andrew Wheeler’s confirmation as @EPA administrator—including his ref… https://t.co/ntKCOjXGJT
— Tammy Duckworth (@Tammy Duckworth) 1551397797.0

By contrast, Wheeler's confirmation was largely praised by Republicans.

"As acting administrator of EPA, (Wheeler) has prioritized commonsense policies that protect our air and water, while allowing our economy to grow," said Senator John Barrasso (R-WY).

Susan Collins (R-ME) was the lone Republican holdout. In a statement, she expressed concern that the Trump administration has become too brazen about its environmental rollbacks:

“I believe that Mr. Wheeler, unlike Scott Pruitt, understands the mission of the EPA and acts in accordance with ethical standards; however, the policies he has supported as Acting Administrator are not in the best interest of our environment and public health, particularly given the threat of climate change to our nation."

Industry leaders like Jay Timmons, president and chief executive of the National Association of Manufacturers, view Wheeler as an effective safeguard against what they perceive as overreach by the federal government.

"Regulatory certainty has been key to the historic manufacturing job growth we’ve seen under the current administration, and that would not have been possible without Andrew’s leadership at EPA,” he said.

However, Elizabeth Gore, senior vice president for political affairs at the advocacy group Environmental Defense Fund, told The Washington Post that it's rather clear what Wheeler intends to do once he officially takes office:

“Unlike with some nominees, we do not have to speculate about what Mr. Wheeler will do in office. From his actions as acting administrator for the past eight months, we have clear evidence of his agenda: undermine rules to limit toxic mercury, allow more smog and water pollution, and roll back protections against the threat of climate change. The senators who voted to entrust Mr. Wheeler with our environment know exactly what he will do with that power.”

Wheeler's confirmation comes just three days after three Trump administration officials revealed that the administration will assemble an ad hoc working group of climate skeptic scientists to reassess the government’s analysis of climate science and the effect of fossil fuels on the planet.

The National Security Council initiative “would include scientists who question the severity of climate impacts and the extent to which humans contribute to the problem, according to these individuals, who asked for anonymity to discuss internal deliberations,” according to The Chicago Tribune, and “would not be subject to the same level of public disclosure as a formal advisory committee,” bypassing The Federal Advisory Committee Act, which stipulates that such committees adhere to rules championing open meetings, chartering, public involvement, and reporting.

Although the plan has not been finalized, the officials said deputy national security adviser Charles Kupperman relayed that President Trump was “upset” that his administration had released the National Climate Assessment, which federal law mandates must be published yearly. The decision to hire skeptics who could scrutinize federal climate reports is part of an effort to stymie Democrats, whom Kupperman said are using last year’s report to bolster their calls for a Green New Deal, a much-talked-about carbon-slashing infrastructure plan.

An administration official said the president was looking for “a mixture of opinions” and disputes the National Climate Assessment.

“The president wants people to be able to decide for themselves,” the official said.

The news prompted many, including former Trump biographer Tony Schwartz, to criticize the Trump administration for mounting its most aggressive denial of climate change yet.

Trump and White House searching for fourth rate scientists who are willing to deny the reality of climate change. A… https://t.co/dnmcWRlAfd
— Tony Schwartz (@Tony Schwartz) 1551053186.0

Climate change experts described the Trump administration's latest proposal as something akin to "assembling a panel of ‘gravity skeptics’ who insist it’s safe to jump off tall buildings, except in this case they want to take us all with them.”