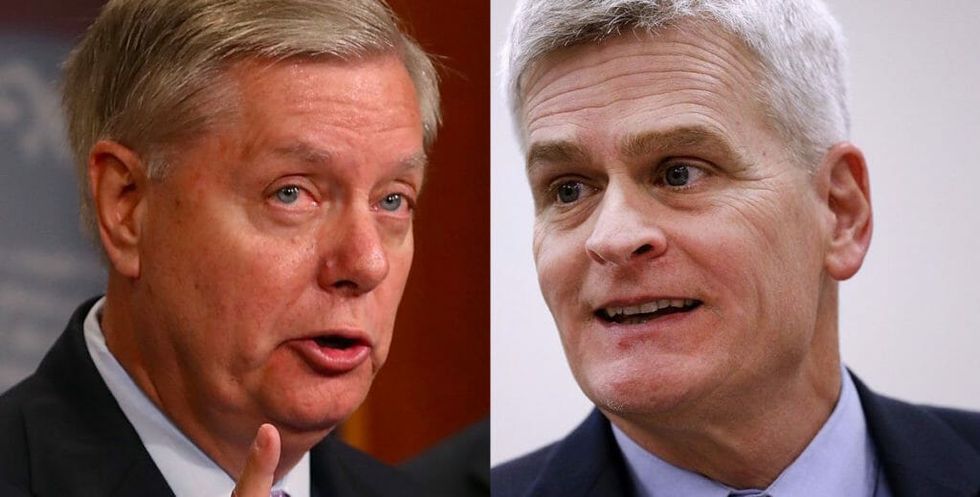 Senators Lindsey Graham (R-SC, left) and Bill Cassidy (R-LA) teamed up to write a health bill that has been the subject of White House meetings. (Getty images)

After four separate attempts to repeal the Affordable Care Act this summer, the Republican Party unveiled one last ditch effort to gut Obamacare. Trying to beat an end of the month deadline, it raises questions on how well those supporting the bill know the contents and repercussions.

Selling the idea as a compromise plan and a way to "return power to states", the senators hope to quickly gain the 50 votes needed for approval, avoiding the bipartisan defeat of their prior attempts.

Needless to say, Democrats have a different vision of the bill.

THREAD: A short primer on all the ways the #GrahamCassidyBill is an intellectual and moral garbage truck fire. https://t.co/X8IjLLay56
— Chris Murphy (@Chris Murphy) 1505758308.0

Not scored by the Congressional Budget Office yet, analysts estimate it would cut deeply into federal funding resulting in millions losing coverage.

“It would substitute a block grant for the funding that now provides states with resources for Medicaid expansion, premium tax credits, and cost-sharing reduction subsidies,” according to Judith Solomon, vice president for health policy at the Center on Budget and Policy Priorities. “People don’t have a guarantee of meaningful coverage. It’s totally different.”

Senate Majority Leader Mitch McConnell plans to bring the bill to the floor as soon as the numbers are there, racing against an end-of-the-month fiscal year end deadline to exploit a budget reconciliation vehicle to pass the bill with only GOP support.

Democrats and independents in the senate are scrambling to ensure that doesn't happen. They expressed their outrage Monday during a nearly four hour talk-a-thon.

This latest attempt to eliminate Obamacare doesn't make sense to pollster Geoff Garin either. Garin analyzes public opinion on Obamacare. He sees the GOP digging a "deeper hole than Republicans have already dug for themselves on health care."

I think Democrats in the Senate assumed that with all the other urgent pressing business facing the Senate, McConnell would be more rational and focus on things that need be done as opposed to something that makes very little political sense at all."

However the fallout from the seeming obsession by the GOP to eliminate any Obama legacy remains to be seen. As does the fate of this latest effort.