Ghosting, Love and Loneliness: What The Internet Is Doing To Our Social Lives 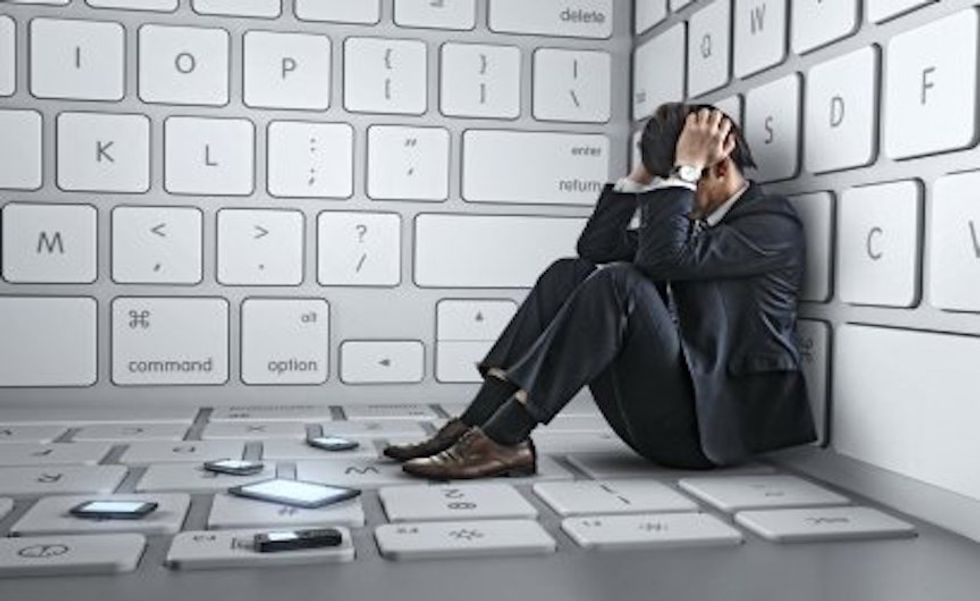 Breaking up by text might be the closest online culture gets to a cyber crime.

That’s because even the most digitally addicted among us assume that we should communicate really important things in person. Or at least over the phone.

It’s a version of the old “The Internet is Making Us Lonely” argument, an assumption that shifting communication from the “real world” to online creates a net loss. Studies dating back to the late 1990s found that “greater use of the Internet decreases communication within the family, diminishes the size of the subjects’ local social networks, and increases feelings of loneliness and depression.” A highly contested 2012 Atlantic article reviewed the research and declared that as a result of the internet “we have never been lonelier (or more narcissistic)—and that this loneliness is making us mentally and physically ill.”

New research, however, suggests that online communication might be a more considerate way to go. Even that text break-up could be a net-plus.

If We’re Not Lonely, What’s the Problem?

A study out of Indiana University called “To Email or Not to Email” discovered that a text-based system, like email, can actually lead to enhanced romantic feelings.

“Using psychophysiological measures from 72 college-age people,” IU wrote in a summary of the study, “[researchers] found that people who sent romantic emails were more emotionally aroused and used stronger and more thoughtful language than those who left voicemails,” and as a result were more influenced than they were by phone calls.

This certainly seems counterintuitive, so it’s no surprise that writers like Slate’s Amanda Hess have used the research to re-open the question of whether the internet really is full of lonely hearts.

“That old narrative about how technology isolates human beings from one another and themselves has flipped 180 degrees,” Hess writes, also quoting several other recent studies finding that “virtual connection can

‘promote sexuality, intimacy, affection, and flirtation’ among partners … (S)ince there are seemingly endless ways to connect, a flirtatious rhythm can be ‘maintained in virtually any circumstance.’”

The argument is that instead of making us less lonely, the internet is making us more connected. Eric Klinenberg (also writing for Slate, and in his book Going Solo) takes the technophile’s side, stating: “Articles about American alienation may well feel true to those who long for simpler, happier times, but they’re built on fables and fantasies. In fact, there’s zero evidence that we’re more detached or lonely than ever.”

He adds: “40 years of social surveys (show) that the quality and quantity of Americans’ relationships are about the same today as they were before the Internet.”

On the other hand, the number of anxiety disorders jumped twenty-fold over 30 years. Right now more than a quarter of Americans will have an anxiety disorder at some point in their lives -- and that may be a conservative estimate.

Reliance on antidepressants has skyrocketed during the era of social media - increasing by over 400 percent from the late 80s through 2008, and by 2013 they were the most commonly prescribed drugs for people 18 to 44 in the United States. Even pop songs are demonstrably more depressing. Researchers analyzed the Top 40 pop hits for the past 50 years, noting tempo, mode, and number of minor chords, as indicative of “sadder” music.

Clearly something is going on. How are we not more lonely?

This is one of those arguments that the Internet loves, like whether Han shot first. But the argument may be unsolvable – not because it’s complicated,

but because it’s based on a faulty premise. Asking whether Facebook is making us lonely is like asking whether toasters are enhancing bread’s bandwidth. It’s a category error.

In fact the question “are we lonelier today?” has a long pedigree. Rollo May wrote about it in the 1950s in The Meaning of Anxiety and Man’s Search for Himself, and before that Freud wrote about how neurotic conditions separate us from our communities, and before that Marx wrote about the new alienation caused by the Industrial Revolution-- all of which suggests that whether or not we’re lonelier now, we were plenty lonely then.

But not all loneliness is created equal. It’s impossible to say if the 18th century agrarian farmer was “more” or “less” lonely than the 19th century factory worker, or the 1950s company man in a grey flannel suit, or us today. But their loneliness and alienation had different proximate causes, manifestations and impact on their lives. That is to say, the qualitative measurement of loneliness (“what is it like”) matters more than the quantitative measurement (“how much of it is there?”).

Historically, while people of every era have always experienced loneliness, new kinds of loneliness have been spreading through Western culture. The intellectuals and Beatniks of the 1950s, for example, weren’t predicting social networking, they were predicting the breakdown of institutions that hold us together – the fraying of social ties, strong (if not to say rigid) families, and the loss of a sense of common purpose. These things have happened, and unquestionably have made us lonely in new ways.

Ways that the internet was supposed to solve.

The internet is changing the nature of what it means to be both “lonely” and “alone.” Instead of “more or less” we should be asking what the nature of loneliness is in the world the internet has made, and how it impact us.

Writing for the Atlantic, techno-skeptic Stephen Marche has a useful take on the subject, suggesting that a new form of isolation has been born.

“The new isolation is not of the kind that Americans once idealized, the lonesomeness of the proudly nonconformist, independent-minded, solitary stoic, or that of the astronaut who blasts into new worlds. Facebook’s isolation is a grind … Among 18-to-34-year-olds, nearly half check Facebook minutes after waking up, and 28 percent do so before getting out of

bed. The relentlessness is what is so new, so potentially transformative. Facebook never takes a break. We never take a break. Human beings have always created elaborate acts of self-presentation. But not all the time, not every morning, before we even pour a cup of coffee.”

Technophile Hess identifies a similar issue in her analysis of internet relationship trends, noting that people in relationships start to panic if their texts are not answered in seconds or their emails in minutes. “Radio silence is perceived as either a provocative choice or a sign of disaster.”

Meanwhile Sherry Turkle, one of key researchers studying the sociological impact of the internet, wrote in a New York Times essay ("The Flight From Conversation") that our increasing reliance on digital devices as intermediaries between ourselves and others is making us worse at connecting with real people.

“We think constant connection will make us feel less lonely. The opposite is true,” she writes. “If we are unable to be alone, we are far more likely to be lonely. If we don’t teach our children to be alone, they will know only how to be lonely.”

Welcome to the new loneliness. While loneliness used to represent an absence of contact – there was no one to talk to or no-one who shared your interests – loneliness in the information era occurs despite a geyser of constant stimulation. We enjoy a feed specifically sorted both by personal choice and by algorithms relevant to our interests, yet we still “feel” alone.

A few decades ago anyone who needed constant reassurance and stimulation was deemed neurotic, but now constant stimulation isn’t enough for many of us. Scientists recently isolated people in a room without a phone or music player, and found that people would rather administer painful electric shocks to themselves than just sit with their

thoughts. That is fundamentally new; people once had to sit and wait quietly for much of  the time, and while they didn’t like it, they also didn’t go out of their way to avoid it.

But it’s not just the need to be stimulated that has changed. As Turkle and other scholars have frequently noted, the more people use digital tools for connection, the more they rely on them. People who overly rely on them can lose the knack for connecting in person. This is not necessarily a fault. As the new research shows, there can be significant advantages to digital communication over in-person contact.

But it does speak to a qualitative change. In-person interaction is often unpredictable and requires us to deal with whatever comes up, while digital interactions allow us to total control over our engagements. We can control what someone sees, the pace of the encounter, how “present” we are (as we multi-task while communicating), and we can disengage at any time.

Or we can simply go radio-silent (in modern Internet parlance, it’s called “ghosting,”), which a slew of articles have called “a 21st century dating problem” because it’s so easy to do. “It happens to me so often that I’ve come to expect it,” one dater told the New York Times. “People don’t hold themselves accountable anymore because they can hide behind their phones.”

Today we not only expect a constant bombardment of stimulation, we require it to be precisely calibrated to our comfort level, from moment to moment. If the definition of “loneliness” had remained constant, modern practices would have solved it. People flocked to social media because they were desperate for new ways to connect with other people – and they got exactly what they asked for. The result is that we now live in a world where, by 1950s standards, no one need ever be lonely again. Yet here we are, again asking ourselves “have things gotten worse?”

Perhaps then loneliness is a result of a lack of meaningful connections, with both individuals and institutions. No technology will hand that to us, there are no short cuts. We’ll always have to work for it.

Suggested social media caption: something to do with "The New Loneliness"?