What's It Like To Live on Mars? These Scientists Found Out. 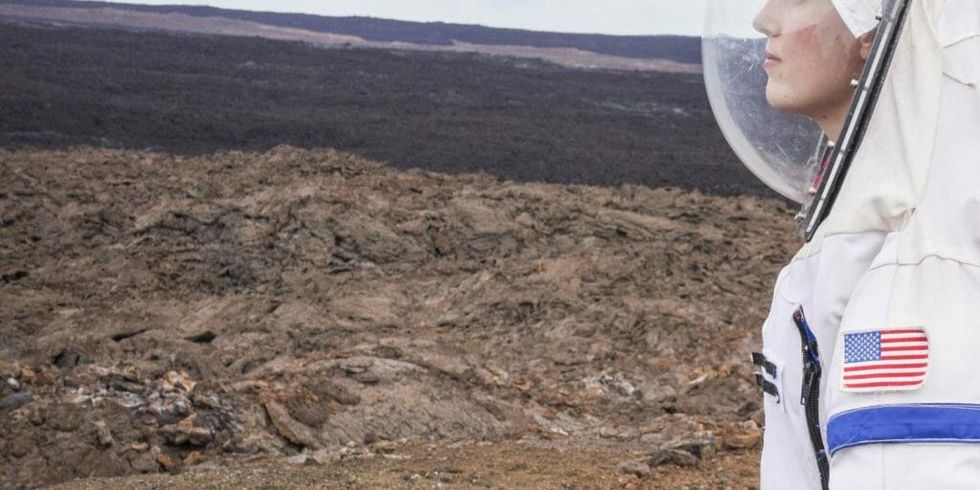 Six scientists have spent the last twelve months on Mars – or Hawaii’s Mauna Loa, which is the closest earthly equivalent.

“It’s really exciting to be able to welcome the crew back to Earth and back to Hawaiʻi after a year on Mars,” says University of Hawaiʻi at Mānoa professor Kim Binsted, principal investigator of the Hawaiʻi Space Exploration Analog and Simulation (HI-SEAS) project.

The scientists lived in isolation on the slopes of Hawaiʻi’s Mauna Loa. The volcanic soil is as similar to Mars as it gets on our planet, both in composition and in appearance. The landscape is rocky and dusty, with no sign of human habitation aside from the dome in which the crew lived and worked.

Although Mars is considered the most Earth-like of the planets in our solar system, that doesn’t mean it’s especially habitable. There’s no oxygen, and the terrain is dry and dusty. Temperatures can go as low as -199 degrees and as high as 80 degrees Fahrenheit, and, while there isn’t any rain, there can be a lot of wind.

While the environmental conditions on Mauna Loa aren’t nearly as extreme as they would be on Mars, the psychological conditions were remarkably similar. The six-person crew was entirely isolated from the outside world. They had to learn to work together in every way, from adjusting to life in a claustrophobic environment to learning how to manage food stores and keep from driving each other crazy.

“Given what it takes to keep people alive in the void – to keep them healthy on Mars for just a year – I can basically promise that by going to space we’ll learn what it takes to keep people healthy in places with heat, light, and gravity,” says Sheyna Gifford. “We’ve already started. We’ve been at it for decades. I’ve been at it for 12 months straight, been on call for almost 365.25 days.”

The six scientists were only able to communicate with the outside via a 20 minute delay, as

would be the case on Mars, and they could only leave the dome encased in bulky space suits.

“The suits do prevent you from hearing and feeling your surroundings,” says Heinicke. “No sound of your own steps makes it past the fan noise and every rock feels like the inside of your suit gloves.”

The crew also struggled with lack of privacy. Living quarters in the dome consisted of an open floorplan with live/work areas on the first floor and small bedrooms on an upper level. "It is kind of like having roommates that just are always there and you can never escape them so I'm sure some people can imagine what that is like and if you can't then just imagine never being able to get away from anybody," says Carmel Johnson.

"The research going on up here is just super vital when it comes to picking crews, figuring out how people are going to actually work on different kinds of missions, and sort of the human factors element of space travel, colonisation, whatever it is you are actually looking at," says Tristan Bassingthwaighte, a doctor of architecture at the University of Hawaiʻi.

The crew used a small greenhouse-like structure to extract water from the very dry and barren land - a discovery that may mean that water can be extracted from the surface of Mars. “Showing that it works, you can actually get water from the ground that is seemingly dry,” Heinicke says. “It would work on Mars and the implication is that you would be able to get water on Mars from this little greenhouse construct.”

The 2016 HI-SEAS mission is the longest of three, which have provided valuable information to NASA about how to plan an actual Mars mission. The twelve months the scientists spent in virtual isolation was twice as long as missions to the International Space Station; a real mission to Mars is estimated to last one to three years.

“I can give you my personal impression which is that a mission to Mars in the close future is realistic,” says French HI-SEAS crew member Cyprien Verseux. “I think the technological and psychological obstacles can be overcome.”

The 2016 HI-SEAS mission won’t be the last. Hundreds of people from all over the world applied for the last HI-SEAS mission, and the University of Hawaiʻi Binsted is currently recruiting for missions in 2017 and 2018.