Astronomers have confirmed that asteroid 2016 HO3 is a quasi-satellite orbiting the sun and also circling the Earth in a unique configuration. The relatively nearby quasi-satellite may provide scientists opportunities for mining, observation, and further exploration in the future. 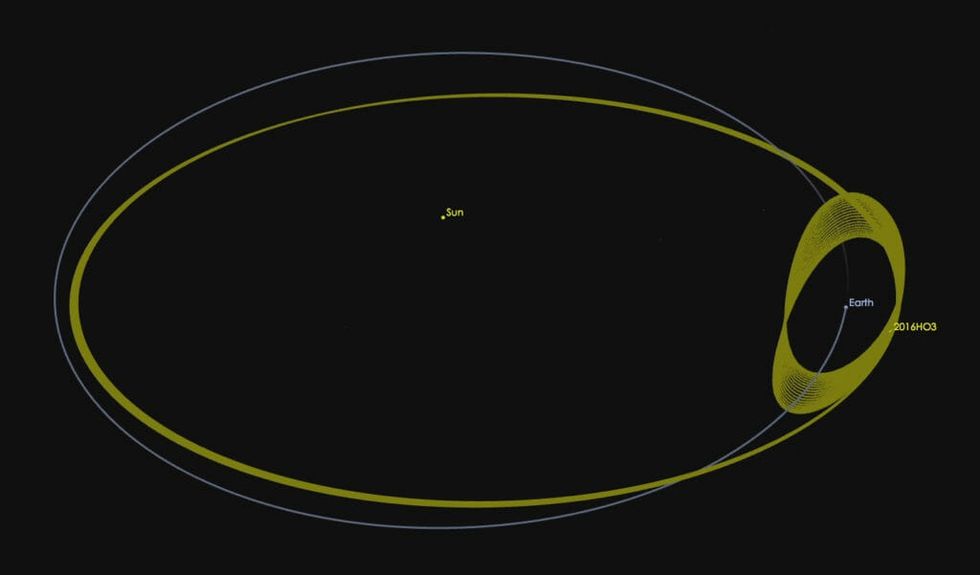 Asteroid 2016 HO3 has an orbit around the sun that keeps it as a constant companion of Earth. Credit: NASA/JPL-Caltech

Does Earth have a second moon? Not quite. But astronomers discovered that asteroid 2016 HO3 does orbit the sun while it circles our planet—establishing its status as a quasi-satellite. Scientists are deeply interested in 2016 HO3, and NASA even envisions an exploration mission to the asteroid.

On April 27, 2016, the asteroid now known as 2016 HO3 was first located by astronomers located at Haleakala, Hawaii. Many suspected it was merely space junk until Vishnu Reddy, assistant professor at the University of Arizona's Lunar and Planetary Laboratory, and his team completed their observations and presented them at the recent 49th annual Division for Planetary Sciences meeting in Utah. According to their findings, 2016 HO3 is indeed an ordinary asteroid and quasi-satellite.

Astronomers at NASA’s Center for Near-Earth Object (NEO) Studies at the Jet Propulsion Laboratory in Pasadena, California wrote, “[2016 HO3] is too distant to be considered a true satellite of our planet, but it is the best and most stable example to date of a near-Earth companion, or ‘quasi-satellite.’”

Earth currently hosts five quasi-satellites, but 2016 HO3 maintains the most stable orbit. Yet, in part, it’s this unstable orbit that defines 2016 HO3 status as a quasi-satellite, as opposed to an actual satellite—or moon. A quasi-satellite’s lack of orbital stability may cause its path to substantially change over time.

Paul Chodas, manager of the Center for NEO Studies explained, “Since 2016 HO3 loops around our planet, but never ventures very far away as we both go around the sun, we refer to it as a quasi-satellite of Earth.”

While many quasi-satellites no longer qualify as such after a few years, 2016 HO3 is expected to remain fairly stable for hundreds of years.

Chodas said, “Our calculations indicate 2016 HO3 has been a stable quasi-satellite of Earth for almost a century, and it will continue to follow this pattern as Earth’s companion for centuries to come.”

Our quasi-satellites come from a population of NEOs that the Earth nudged in a particular way, causing them to tag along with us; in the case of 2016 HO3 this created a unique co-orbital configuration.

2016 HO3 is primarily dominated by the sun’s gravity, which accounts for its orbit, but it’s also subject to a minor, secondary influence from Earth’s gravitational pull. Because Earth does not provide the dominant source of gravity on the quasi-satellite, their solar orbits remain out of sync, with 2016 HO3 making an annual loop around the Earth.

More specifically, astronomers have discovered 2016 HO3 passes Earth in its solar orbit and then lags behind—with the asteroid dividing its time closer and further from the sun about evenly.

Chodas explained, “In effect, this small asteroid is caught in a game of leapfrog with Earth that will last for hundreds of years.”

The orbit of 2016 HO3 also tilts a bit, adding a once-per-year bobbing motion up and down through Earth’s own orbital plane, accentuating the peculiar orbit of this quasi-satellite and its relationship to Earth.

Chodas said, “The asteroid’s loops around Earth drift a little ahead or behind from year to year, but when they drift too far forward or backward, Earth’s gravity is just strong enough to reverse the drift and hold onto the asteroid so that it never wanders farther away than about 100 times the distance of the moon.” He added, “The same effect also prevents the asteroid from approaching much closer than about 38 times the distance of the moon. In effect, this small asteroid is caught in a little dance with Earth.”

What details can we see?

Even at that distance, however, 2016 HO3 remains too distant to be studied in detail. During their observations, Reddy and his team tried to glean as much information as possible about the quasi-satellite, using the highest levels of technology available.

“In an effort to constrain its rotation period and surface composition, we observed 2016 HO3 on April 14 and 18 [2017] with the Large Binocular Telescope and the Discovery Channel Telescope,” Reddy said.

While unable to determine the object’s size, during a close approach, Reddy’s team was able to make certain other findings about rotation and composition.

"Our observations show that HO3 rotates once every 28 minutes and is made of materials similar to asteroids," Reddy said.

The team also found that Earth’s most stable quasi-satellite reflects light in a spectrum similar to other small NEOs, indicating they have a similar origin. Some of those have traveled to Earth as meteors, typically asteroids ejected from the Main Belt by the powerful gravity of Jupiter.

Reddy explained, “The derived rotation period and the spectrum of emitted light are not uncommon among small NEOs, suggesting that 2016 HO3 is a natural object of similar provenance to other small NEOs.”

The likely source of the quasi-satellite and its relative close proximity to Earth makes 2016 HO3 the focus of further scientific investigation. For instance, NASA may use the quasi-satellite for its Asteroid Redirect Mission, where the goal is to pull an asteroid into the Moon’s orbit for closer observation.

While 2016 HO3’s current distance does render it challenging to study, it’s the closest of all the quasi-satellites. If scientists want to try to mine or even explore an asteroid, having this one relatively close in a fairly stable orbit could be quite helpful. Indeed, NASA intends to send a crew on the Orion spacecraft via the Space Launch System to a NEO within 10 years. The mission would also help NASA learn more for future deep space explorations, including Mars.

Speaking about the quasi-satellites, Christian Veillet, director of the Large Binocular Telescope (LBT) Observatory said, "Of the near-Earth objects we know of, these types of objects would be the easiest to reach, so they could potentially make suitable targets for exploration." He added, "With its binocular arrangement of two 8.4-meter [27.5-foot] mirrors, coupled with a very efficient pair of imagers and spectrographs like MODS, LBT is ideally suited to the characterization of these Earth's companions."

As new technology in telescopes develops, we may discover even more quasi-satellites than we know about right now.