Researchers have discovered a brand-new state of matter, solving a 40-year-old mystery. In this new state, a quantum spin liquid, electrons behave in a curious new way. 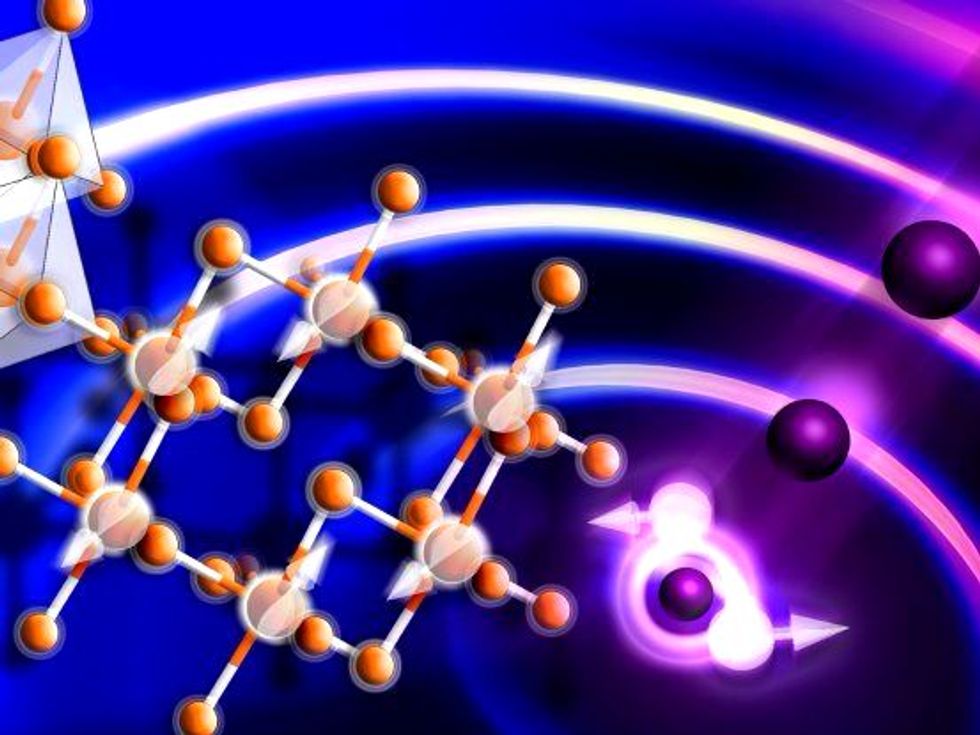 Most people are familiar with the four traditional states of matter: solid, liquid, gas and plasma. However, scientists have logged over 20 additional “exotic” states of matter, and a new one was recently added to the list. The newly discovered state of matter, called a “quantum spin liquid,” breaks electrons - which were previously, as fundamental particles, considered indivisible - into pieces.

In the case of a quantum spin liquid, neither “spin” nor “liquid” take on their obvious meanings. In quantum mechanics, spin does not denote that a particle is rotating, but rather serves as a metaphor for strange properties of quantum particles. When an electrically charged particle, like an electron, rotates, it creates a magnetic field. However, electrons have much stronger magnetic fields than could ever be accounted for by any realistic speed of rotation. Quantum spin accounts for the rest of a particle’s magnetic field that could not be accounted for by the particle actually spinning, but it is an intrinsic property, not an action (like rotation) the particle is performing. The word “liquid” serves as a metaphor: just as water is primarily made of disordered ice molecules, quantum spin liquids are essentially a more disordered version of regular magnetic particles.

The existence of quantum spin liquids was predicted 40 years ago due to the behavior of certain magnetic materials, but they had yet to be directly observed. "Until recently, we didn't even know what the experimental fingerprints of a quantum spin liquid would look like," said paper co-author Dr. Dmitry Kovrizhin. "One thing we've done in previous work is to ask, if I were performing experiments on a possible quantum spin liquid, what would I observe?"

What scientists at the University of Cambridge in England and the Oak Ridge National Laboratory in Tennessee did observe were particles called Majorana fermions, created when

electrons split apart. Majorana fermions and other “quasi-particles” are simply shorthand used to explain the strange behavior of electrons within a material.

In quantum spin liquids, that behavior certainly is strange. In a typical magnetic material, each electron acts as a miniscule bar magnet, with both north and south poles. When the material is cooled, the electrons all align so that their north poles are pointing in the same direction.

To observe these patterns, researchers bombarded pieces of alpha-ruthenium chloride, a material similar to graphene, with neutrons. As the neutrons bounced off the material, they created a ripple pattern on a screen (like light bouncing off your face and creating an imagine in the mirror). This pattern was distinct: broad curves instead of the sharp lines expected from a regular magnetic material. These broad curves occur due to the disordered magnetic nature of quantum spin liquids, with Majorana fermions causing all sorts of entanglement and unusual magnetic properties.

"It's an important step for our understanding of quantum matter," said Kovrizhin. "It's fun to have another new quantum state that we've never seen before - it presents us with new possibilities to try new things." Those new possibilities may include quantum computers, which could use the quantum entanglements represented by Majorana fermions to work drastically faster than today’s computers. The discovery of a new state of matter is important fundamental science: while it is likely to contribute to society, it is also a major accomplishment in its own right.