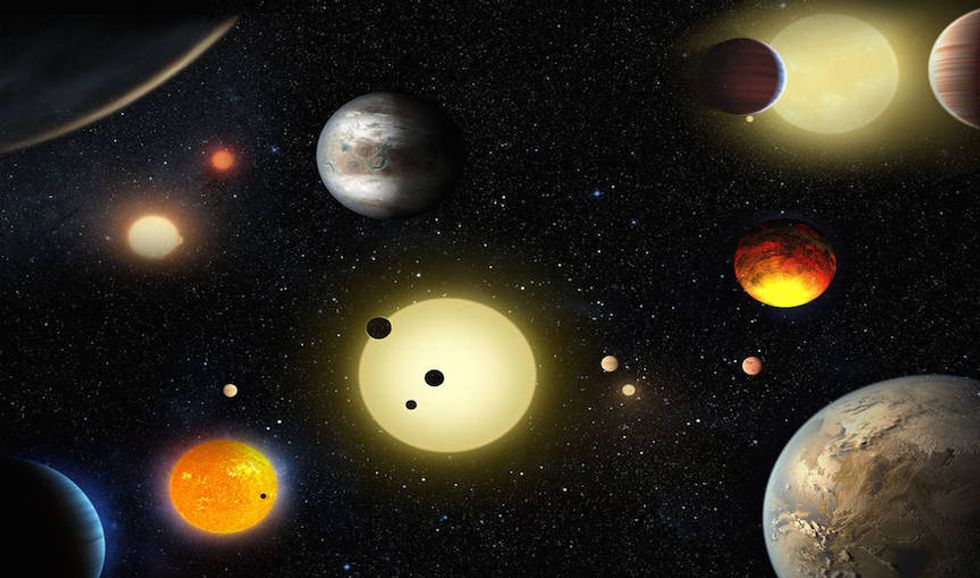 GDoc link: What Does NASA’s New Planet Discovery Mean for Life in Space?

This May, NASA nearly doubled the number of known exoplanets, planets that orbit other stars. Scientists from the Kepler mission announced 1,284 new planets, the largest single batch of planets ever discovered. Of those planets, nine are rocky planets like Earth which could potentially support life. This discovery provides a series of clues to how likely we are to find extraterrestrial life in our galaxy.

According to NASA’s Exoplanet Archive, there are now 3,268 confirmed exoplanets, plus 2,416 unconfirmed exoplanet candidates. Researchers used the “transit method” to discover most of those planets, including the ones just added to the list. The transit method describes how a star’s light appears to dim slightly when something passes between us and the star. When that something is a planet, the light dims periodically when the planet’s orbit brings it in front of the star. It’s like a mosquito flitting past a light bulb: if you look at just the right time, you might see the dark spot. Kepler’s planet discoveries are like noticing the dimming caused by that mosquito from 7 million miles away.

Once astronomers notice the dimming, they need to confirm that it is, in fact, caused by a planet and not something else. In the past, it was a time-consuming and laborious process to upgrade an exoplanet candidate to a confirmed exoplanet: scientists had to confirm each candidate individually, reviewing the exoplanets and their host stars one by one. A steadily increasing rate of exoplanet discovery, however, requires a faster method of review: when new planets can be discovered in bulk, they need to be analyzed in bulk, too.

To confirm Kepler’s latest exoplanet announcement, scientists used a single method of statistical analysis on each candidate. "Planet candidates can be thought of like bread crumbs,” said Timothy Morton, the astronomer who developed this new method. “If you drop a few large crumbs on the floor, you can pick them up one by one. But, if you spill a

whole bag of tiny crumbs, you're going to need a broom. This statistical analysis is our broom." It sweeps up every potential planet and assigns it a probability: candidates with more than a 99% chance of being genuine exoplanets are confirmed, and the rest are studied further to determine whether they are planets or impostors.

The Kepler space telescope only covers about 1/400 of the sky in the constellations Cygnus and Lyra, observing over 100,000 stars. Kepler’s successor, TESS, is set to launch next year. TESS will use the same methods to monitor over 200,000 stars across the sky for planets, focusing on the stars closest to our solar system. Like Kepler, it will undoubtedly find thousands more exoplanets in our neighborhood. “We now know that exoplanets are common, most stars in our galaxy have planetary systems and a reasonable fraction of stars in our galaxy have potentially habitable planets,” Paul Hertz, Astrophysics Division director at NASA Headquarters in Washington, D.C., said. “Knowing this is the first step toward addressing the question, “Are we alone in the universe?’”

Within our solar system, we can look for signs of life based on the biological effects that it has on a planet. Beyond this neighborhood, though, our current technology can only tell whether a planet could harbor life, not whether it does. So, when we search for distant intelligent life, we have to look at how alien technology has affected the planet and signals that they might have sent out. SETI, the Search for Extraterrestrial Intelligence, has been on the hunt for those signals for decades.

The Drake Equation was devised in 1961 by astrophysicist Frank Drake as a way to estimate the number of active extraterrestrial civilizations in our galaxy: essentially, how many alien

civilizations there are that could potentially communicate with us. The equation has seven variables:

Multiply those numbers together, and you’ll get the number of alien civilizations that we could communicate with.

The first variable in the Drake Equation is also the best-defined: scientists from NASA and the European Space Agency have calculated that the Milky Way produces about seven new stars per year. The discovery of these new exoplanets has helped scientists narrow down the value of the second variable: the fraction of stars that have planets. The Kepler data suggest that many, perhaps even most, stars have planetary systems. Given this, it is a reasonable estimate that there is one planet per star. When we look up to the sky, we do not see lonely spots of light, but whole solar systems, some just like our own.

In fact, many of these solar systems may be very similar to ours, providing a step toward determining the third variable in the Drake Equation: how many planets could support life. The area around every star has a “habitable zone” in which liquid water could exist: a planet orbiting in this area is neither so cold that all water would freeze nor so hot that it would

evaporate. Because all life on Earth (that we know of) requires liquid water, planets with liquid water could theoretically support the type of life that we find on Earth. Of the 3,268 confirmed exoplanets, 21 are confirmed to be within their stars’ habitable zones.

"You can see, doing the math, that you're talking about tens of billions of potentially habitable, Earth-sized planets out there in the galaxy," Kepler mission scientists Natalie Batalha said in a NASA news conference. There is certainly no shortage of planets that could support life in our galaxy, not to mention all of space!

The last four parts of the Drake Equation are where it gets tricky: how can we calculate how common life and civilization are, or how long a civilization can communicate, when the only example we have is ourselves? With the data we have now, it’s impossible to say. Life on Earth began soon after it became possible, which would suggest that life could be inevitable on a habitable planet. However, with no other examples, we might equally believe Earth to be unique, assuming that it takes an incredibly unlikely series of coincidences for life to start. The same issues are at stake when determining whether that life develops intelligence, civilization and communication. The lifespan of a communicating civilization is slightly easier to estimate: while some optimists might say that a sufficiently advanced society will find a way to last forever, a more conservative estimate based on 60 Earth civilizations including ancient Sumeria, the Roman Empire, and the nine dynasties of China, puts a civilization’s lifespan around 420 years.

Using the values suggested by the Kepler data, along with conservative guesses for the variables that are currently impossible to measure, the Drake Equation yields a result of about 29 communicating civilizations in the Milky Way at any given time. Different guesses can lead to vastly different results - different groups have suggested that there might be no other communicating civilizations, 40 million of them, or anything in between. What is clear, though, is that as Kepler (along with its successor, TESS, and other planet hunts) continues to produce data and scientists continue to learn to evaluate it in larger and larger volumes, we will continue to pursue a better understanding of the other planets in our galaxy.

As astronomers discover an ever-increasing number of planets, the data piles up, yielding more and more opportunities to resolve unanswered questions about our galaxy. It seems inevitable that eventually that pile of data will be high enough to serve as an answer. When it comes to characterizing our galaxy and its potential for life, each new planet discovered is a small step; it’s tough, then, not to call 1,284 new planets a giant leap.