Why Being "Hangry" is Seriously a Thing 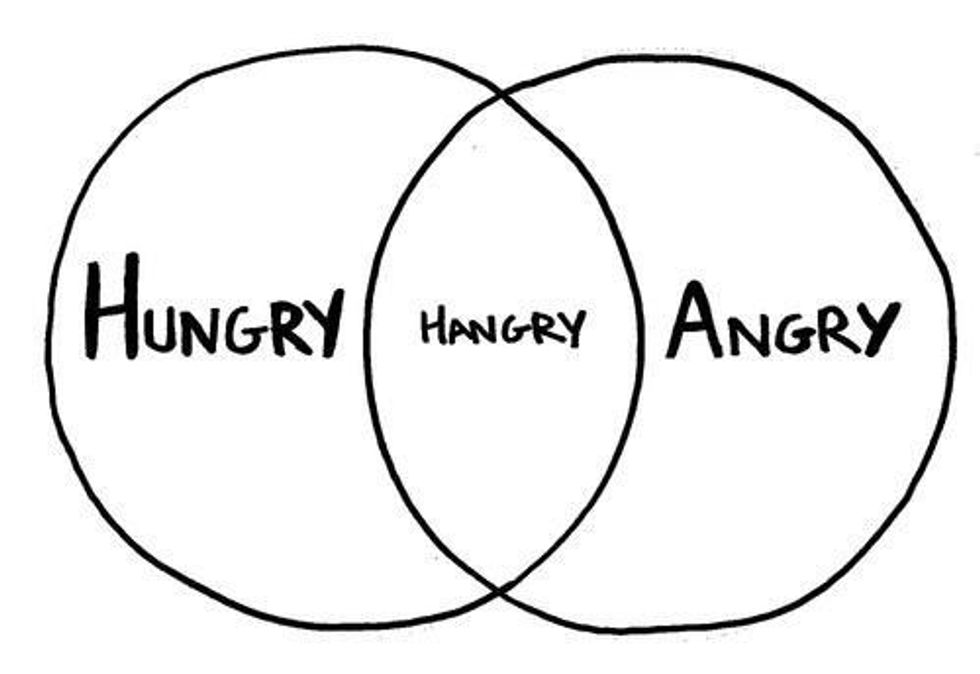 You know when you’re really hungry, and all of a sudden everyone is incredibly annoying and you decide that human beings are the worst? Like seriously. The. Worst. If so, then you know what being “hangry” is—those feelings of anger or grumpiness that bubble up when it’s past time to eat.

Now science has validated that being hangry is actually a thing—and we know why it happens.

Feelings of anger that arise when you’re hungry are a survival mechanism, initiated by the brain.

When you eat, the carbohydrates, proteins and fats in your food are digested into simple sugars, amino acids and free fatty acids. When glucose is first absorbed, blood glucose levels begin to rise. These nutrients are then distributed, via the bloodstream, throughout your body and used for energy.

With time (and digestion), the amount of the nutrients circulating in your bloodstream begin to drop. The brain is critically dependent on glucose, unlike other organs and tissues which can use a number of nutrients to continue functioning. When levels get too low, the brain perceives it as a life-threatening situation.

With the brain in survival mode, it is not as able to regulate. When this happens, you may notice that it is harder to concentrate, or that you snap at your loved ones and colleagues. “The brain needs fuel to regulate emotions, and anger is the emotion people have the most difficulty regulating,” explained Dr. Brad Bushman, professor of psychology at Ohio State University.

In fact, in one study, married couples were asked to stick pins into voodoo dolls that represented their spouses, simulating how angry they felt toward them. Participants also competed against their spouses in a game. The winner could blast loud noises through the loser’s headphones. Throughout the study, researchers tracked the participants’ glucose levels. Those with lower sugar levels stuck more pins and gave longer blasts.

In addition to the immediate effects of low blood sugar, low levels can trigger additional problems for emotion regulation. When levels get too low, stress-related hormones, like cortisol and adrenaline, are released, which can cause people to act more aggressively toward those around them. They can also trigger the release of neuropeptide Y, a chemical that controls hunger and anger. People with high levels or neuropeptide Y tend to show high levels of impulse aggression.

Looking at this from an evolutionary perspective, feelings of hanger make sense, said Dr. Paul Currie, a professor of psychology and neuroscience at Reed College in Oregon. “If you’re an animal and you’re hungry, you need food to survive. So it’s natural that you would feel anxious and irritable and preoccupied until you’ve met that need.”

Luckily, there’s a pretty simple solution to tame these aggressive and negative feelings. Eat! Your best bet? A carb and protein combination, like peanut butter and apple or yogurt and fruit, can keep you full and help keep your emotions under control until meal time.