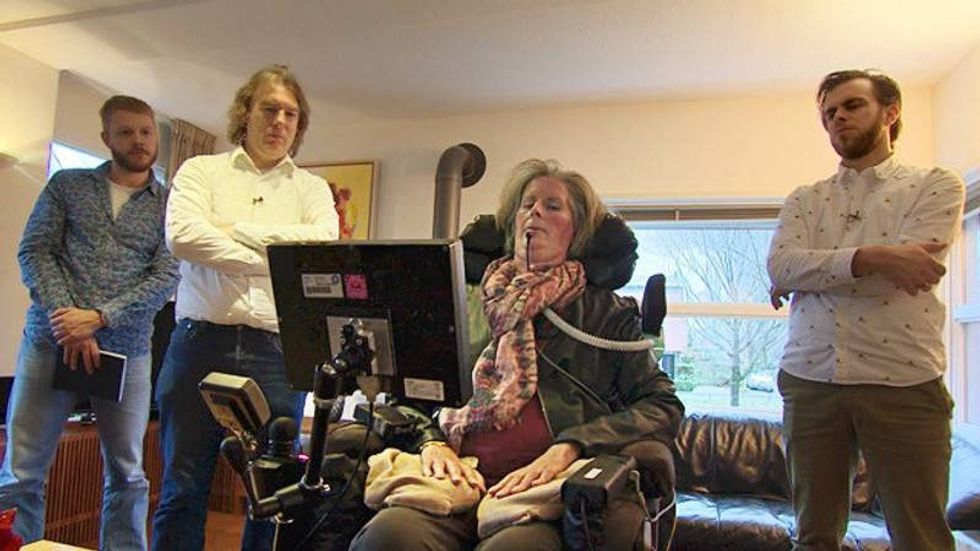 Doctors have successfully provided the first patient with amyotrophic lateral sclerosis (ALS) with a brain implant system that allows her to communicate via her thoughts. Prior to this surgery, Hanneke de Bruijne of the Netherlands, who is paralyzed and on a ventilator, had been what medical professionals refer to as “locked in.” That is, she was unable to communicate with the outside world due to the physical paralysis that gradually overtook her entire body.

Dr. Nick Ramsey, also of the Netherlands and lead researcher on the brain-implant study, says, "It's a completely harrowing situation ... as people are still cognizant." The brain implant provides Bruijne substantial improvement in her ability to communicate.

The Science of the Brain Implant

Rather than use eye movement to select letters, the brain implant places electrodes on the part of the brain’s surface that controls hand movements and also in the region used to count backwards. The brain activity travels through a wire to another electrode, implanted in the chest. Outside the body, components include an antenna, a receiver and a tablet with a simplified keyboard on a screen.

Bruijne stares at the screen until a square passes over the letter she wants to choose. She trained her brain over six months to send a signal telling her arm to move at that precise moment, which stimulates the electrodes and activates a click on the keyboard through the

system with 95 percent accuracy. After 28 weeks, she was able to communicate two letters per minute, according to the study published in the New England Journal of Medicine.

Even though her arm is not actually moving, the implanted electrodes control the keyboard’s activity. Ramsey, a Professor of Neuroscience at the Brain Center Rudolf Magnus, explained to CNN that the implant works because, even though complete paralysis prevents people from communicating, “the brain still does its work to generate electricity.”

While brain-implant technology will also help those whose communication is severely impaired by stroke or severe damage to the nervous system, Ramsey wanted to help patients with the incurable, degenerative condition of ALS in particular. He says, “We wanted to give these patients back their dignity.”

Newfound Freedom for People With ALS

Without having to rely on the perfect light for eye-movement sensors, the brain-implant system has improved Bruijne’s quality of life by allowing her to communicate in a variety of settings.

"The implant gives me freedom, independence and safety," de Bruijne wrote in an email composed on a tablet linked to her implant. "It enables me to enjoy my garden and going outdoors in nature."

Ramsey is hopeful the brain implant technology can be adapted to more uses. “With the right software, we could use it to, for example, turn off the TV,” Ramsey says. “We could use icons to control appliances in the home. You could conceivably do a lot with a click.”

Bruijne is also awaiting future advancements in the brain implant applications. She says, “My dream is to be able to drive my wheelchair.”