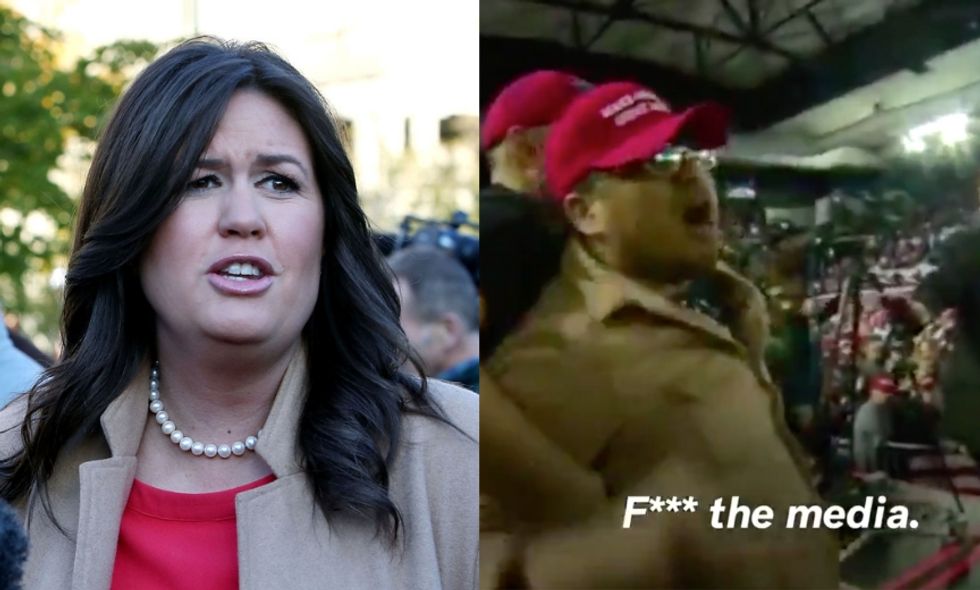 During President Donald Trump's speech at a campaign rally (his first of 2019), a frenzied supporter of his lunged at a BBC journalist in the press pool, shouting "F**k the media," shoving reporters, and overturning a camera.

The supporter's actions were caught on video.

Trump supporter 'violently attacks' BBC cameraman at rally after US president whips up anger over media https://t.co/4XoTA2TQtp
— The Independent (@The Independent) 1549965446.0

“President Trump condemns all acts of violence against any individual or group of people - including members of the press. We ask that anyone attending an event do so in a peaceful and respectful manner."

The idea that Trump condemns all acts of violence—especially at his rallies—is demonstrably false.

He's previously fantasized about punching protestors in the face.

He suggested "Second Amendment people" do something about Hillary Clinton.

He encouraged attendees of his rally to "knock the crap" out of protestors as well, assuring he'd pay the court costs of anyone who did.

Trump has called for cops to be rougher on suspects.

It wasn't long before people began pointing this out.

Trump has spoken in the past about whether or not his rhetoric incites violence.

He's categorically denied that his words have led to anyone becoming violent toward the President's critics, before calling journalists violent for even asking the question.

However, Trump supporters like the man who attacked the BBC cameraman, have previously committed or attempted to commit acts of violence that go hand in hand with Trump's past rhetoric.

Sayoc's car was festooned with Pro-Trump stickers and other paraphernalia.

#AgeOfTrump remembering After a frenzied nationwide search for the person who sent 13 makeshift bombs to some of… https://t.co/I3z6p2uoHj
— Jon Smyth (@Jon Smyth) 1545323456.0

Thankfully, none of these bombs detonated, but Trump supporters have often engaged in physical violence as a possible result of the President's rhetoric.

Trump supporter punches protester in the face. Imagine if it were the other way around they would call him a thug. https://t.co/l4owKOYZGB
— Markeece Young (@Markeece Young) 1457632159.0

Whether or not the President intends to incite violence is irrelevant if he can't grasp that, when he speaks, his supporters listen to him.