Sarah Sanders Went on 'Fox & Friends' to Slam Democrats Over Immigration, and One of the Hosts Just Called Her Out on Her Lie 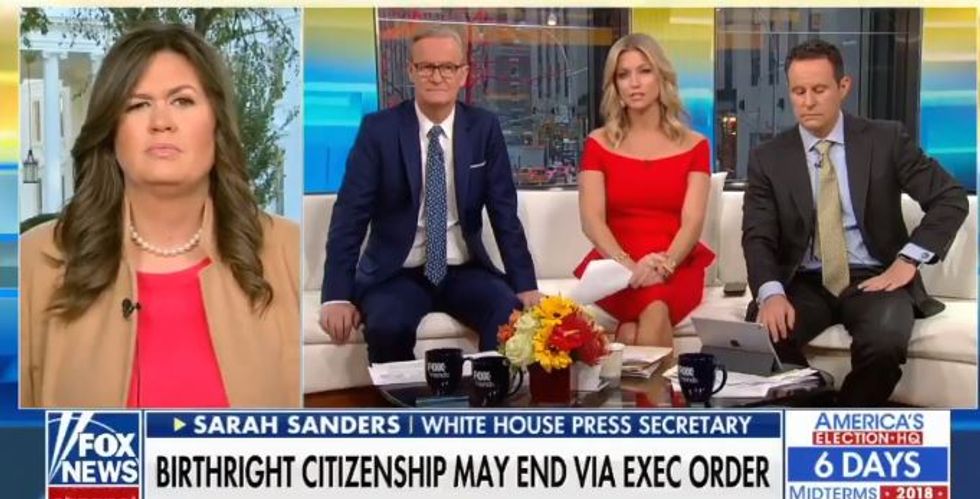 White House Press Secretary Sarah Huckabee Sanders is no stranger to scrutiny from the press, but it's likely she wasn't expecting so much of it from the Trump administration allies at Fox News.

Nonetheless, Fox & Friends host Steve Doocy called out Sanders for a false statement she made on immigration.

When asked about Trump's intention to attempt to repeal birth right citizenship through executive order, Sanders did what she does best: blame the Democrats:

"Let's not forget...why we're even here at all. That's because the failure of congress - Democrats in congress actually - to do their job. And again the president is going to take whatever powers he has to protect our borders and to protect our country."

That's when Doocy chimed in:

"Sarah, you remember - it was a number of months back - where the president and Chuck Schumer, it sounded like they came pretty close to a deal. Chuck said, 'Y'know what, I'll give you the money for the wall, Mr. President, I just want the DREAMers to be able to stay in the United States. And the president (from stories we've heard) said 'I want more. No.' Was that a mistake not to take that deal at that point?"

This false statement from the Trump administration has been pushed since at least February, when Senator Chuck Schumer (D-NY) entered negotiations with the president to reach a consensus on an immigration bill, on the condition that the DREAMers - undocumented Americans brought to this country as young children - would be permitted to stay in the country. The senate had nearly reached a deal that satisfied both parties only for it to be rejected by the president.

He continues to blame Democrats for holding up immigration reform.

The United States has been spending Billions of Dollars a year on Illegal Immigration. This will not continue. Demo… https://t.co/K11ZLxSTp3
— Donald J. Trump (@Donald J. Trump) 1540562148.0

Americans on Twitter have been calling out that narrative for months.

How Can @NPR repeat Sarah Sanders's quote that Democrats are holding up immigration reform in Congress without noti… https://t.co/rcM2kl1iMg
— Annie Gabillet (@Annie Gabillet) 1540996327.0

Ahh so there it is. He’s holding these kids hostage until Democrats give him the votes to pass the other immigratio… https://t.co/SGS8XbDWtF
— Mozart’s Paintings (@Mozart’s Paintings) 1529411945.0

Donald Trump's most recent attack on immigration - legal and illegal - are poised to keep the claim alive.

The president recently said that he would end birth right citizenship through executive order, but there's one small problem: The United States Constitution.

The same constitution that many Republicans claim should be followed to the letter enshrined birth right citizenship with the Fourteenth Amendment in 1868:

It's unlikely that the president can unilaterally alter the constitution, but he may not have to. Some legislators have already taken his side - like Senator Lindsey Graham (R-SC) who intends to introduce legislation doing just that.

Americans aren't having it.

BREAKING: The Republican President of the United States has announced his intention to repeal the Fourteenth Amendm… https://t.co/G5FHLOiOzE
— Peter Daou (@Peter Daou) 1540895551.0

@LindseyGrahamSC It’s not a policy, it’s the Constitution. You are violating your oath of office, defending a scu… https://t.co/vEvhVHor0x
— William Rodgers (@William Rodgers) 1540996825.0

The definition of citizenship is written into the Fourteenth Amendment. An Executive Order does not overrule the C… https://t.co/WfUZh3qG8E
— Ada❌ VanHo 🇺🇸 (@Ada❌ VanHo 🇺🇸) 1540894725.0

The attacks on birth right citizenship by Graham, Huckabee Sanders, and Trump should give Americans even more reason to make their voices heard during midterms next week.