How did that work out for us last year? 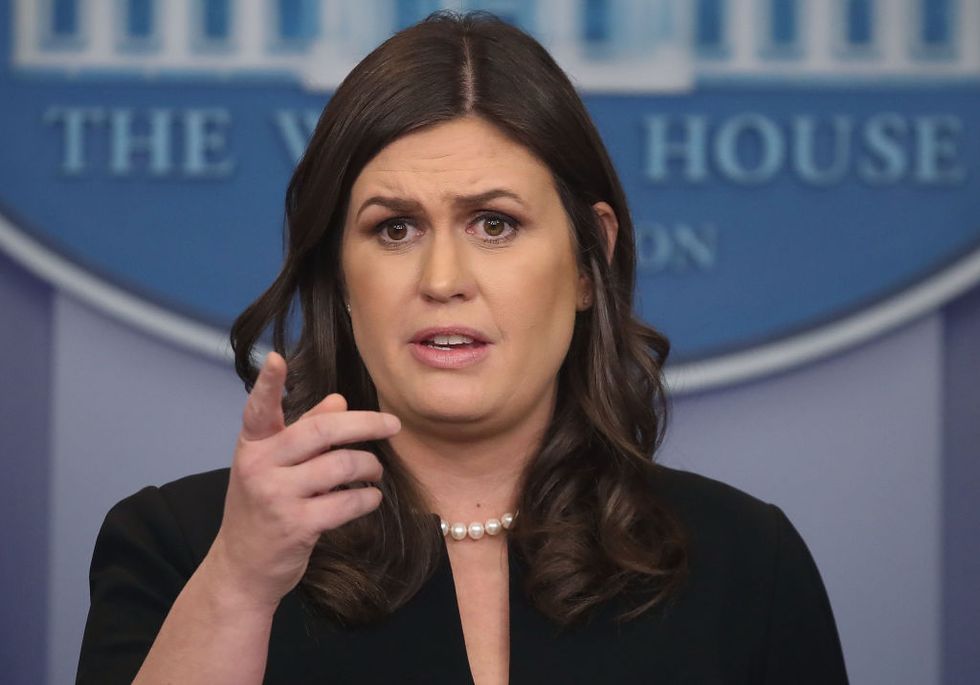 When questioned by Yahoo News reporter Hunter Walker about President Donald Trump's time on the links, White House Press Secretary Sarah Huckabee Sanders insisted that the president uses the time he spends playing golf as an opportunity to develop "deeper and better relationships with members of Congress."

“I think it would certainly be developing deeper and better relationships with members of Congress in which those relationships have helped push forward the president’s agenda ― specifically when it comes to helping get the tax reform and tax cuts passed,” Sanders said.

She added: “He has played golf with a number of senators and used that time certainly to accomplish that.”

Reporter: “Can you tell me the biggest single thing the president has accomplished for the American people during h… https://t.co/RUYCDXag9F
— NBC Politics (@NBC Politics) 1514923712.0

Many were not convinced.

During her briefing today, White House Press Secretary Sarah Huckabee Sanders suggested it was the press who has an… https://t.co/3qQ6u7j0zb
— Adam Brearley (@Adam Brearley) 1514927099.0

Sanders's answer lies in stark contrast to past behavior from Trump administration officials, who have often refused to release details about whether Trump is golfing, and with whom. For instance, last week, officials used a large truck to attempt to block cameras from capturing footage of the president golfing.

Sanders denied that the White House has sought to mislead the press about the time the president spends on his golf courses. Instead, she denigrated members of the press and circled attention back to the president's agenda.

“I think it’s the press that has an issue with his time on the course,” she said. “The president is extremely proud of the accomplishments we had during 2017. ... It was probably one of the most successful first years in office ― passed major legislation, reworked the court system and got a Supreme Court justice nominated and approved and on the bench in the first year. A booming economy, massive gains against the war on ISIS.”

President Trump has visited his golf courses 92 times as president––and has golfed with lawmakers at least seven of those times, according to CNN's latest count. Trump's golfing habit has come under fire because he frequently criticized former President Barack Obama for golfing, regularly insisting that it was a sign Obama was skirting his presidential duties.

As Second Nexusreported in April:

Everyone deserves a vacation. Many of us get it: The average American receives 15 days of paid vacation per year after 25 years on the job (23 percent of workers receive no vacation time at all). But in three months in office, President Trump’s frequent need for R&R at a variety of the luxury properties he owns has cost taxpayers more than Obama spent in an entire year.

Trump’s travel expenses, combined with huge costs for maintaining the First Lady in a separate residence in NYC, and costs associated with the extensive business and leisure travels of his adult children and their families, has the public footing an unprecedented bill — much of which is paid right back to the Trump family business interests.

Fortune reported that Trump’s first three trips to his Mar-a-Lago private resort in Florida cost taxpayers more than $10 million. By comparison, President Obama’s travel expenses averaged $12.1 million for each year he spent in office, prompting the Washington Post to estimate that the U.S. Treasury will outspend Obama’s eight-year bill in just one year of the Trump presidency. Trump has spent nearly every weekend in Florida since taking office.

To date, CNN's tally shows Trump has golfed with:

CNN notes that the seven instances were either confirmed by the White House or the lawmaker was spotted with the president by its own reporters.