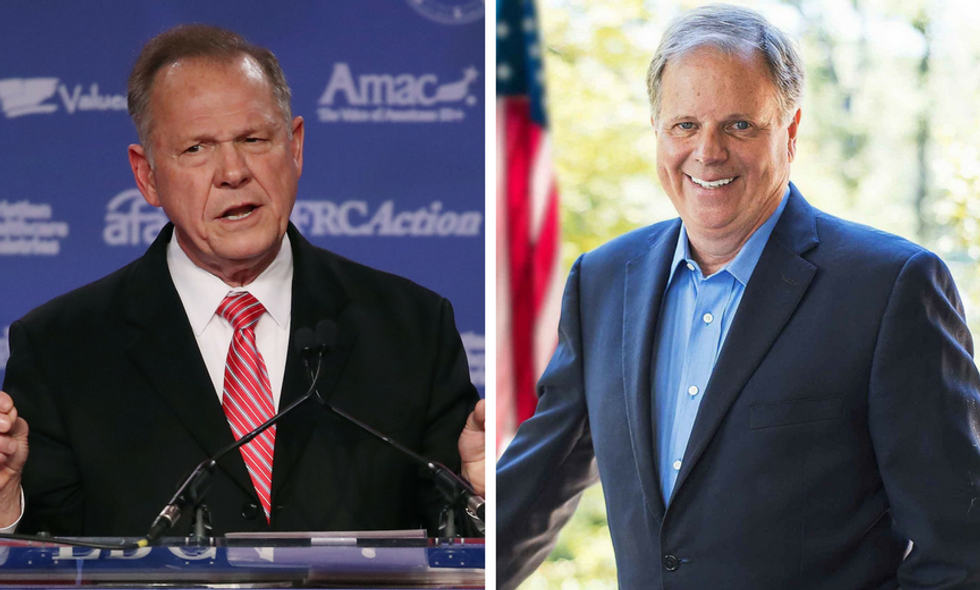 The polls are closed and ballots have been counted. Democrat Doug Jones has beaten Republican Roy Moore in the Alabama Senate race, according to the New York Times. However, instead of conceding the race, Moore has asked for a recount. You can watch Moore's speech above. Moore cited an Alabama law that said that if a vote is 0.5% disparity, there is an automatic recount. However, Jones' percentage over Moore is 3x that. If the percentage is over 0.5, Moore would have to pay for a recount himself.

Alabama Secretary of State John Merrill has said that Jones is the winner but the election will be certified no earlier than December 26 or no later than January 3. Military ballots have not yet been counted.

The vote in Alabama today was to fill the Senate seat vacated by Jeff Sessions, who now serves as the attorney general under Donald Trump. Prior to the polls closing at 8 p.m., Moore was expected to triumph in rural, mostly white parts of the state. Jones went after urban and black counties, including include Birmingham and Montgomery.

Trump has since tweeted about Jones' win:

You can watch Jones' victory speech below. In it, Jones thanked all the communities, particularly the African-American and Latino communities of Alabama. In his speech, Jones quoted abolitionist Theodore Parker, who was also quoted by Martin Luther King, Jr., "The arc of the moral universe is long, but it bends towards justice.”

The race was closely watched nationwide and was also viewed as a gauge of the Republican party's standing, as Moore's campaign had been mired in allegations of sexual misconduct with teenage girls. On November 9, 2017, The Washington Post reported the account of a woman, Leigh Corfman, who claimed that Moore approached her at 14, in Etowah County, Alabama while she was sitting on a bench with her mother in 1979. During the exchange with her mother, Corfman said Moore offered to watch the young  Corfman while she went into the courthouse for a child custody hearing. While waiting with Leigh, he allegedly got her phone number. Days later, she claimed, Moore picked her up and molested her.

Soon after, more women came forward with similar stories, including Beverly Young Nelson, who had a signature by Moore in her yearbook that read, "To a sweeter more beautiful girl I could not say Merry Christmas. Christmas 1977. Love, Roy Moore, D.A."

In it, Obama says:

“Doug Jones is a fighter for equality, for progress. Doug will be our champion for justice. So get out and vote, Alabama.”