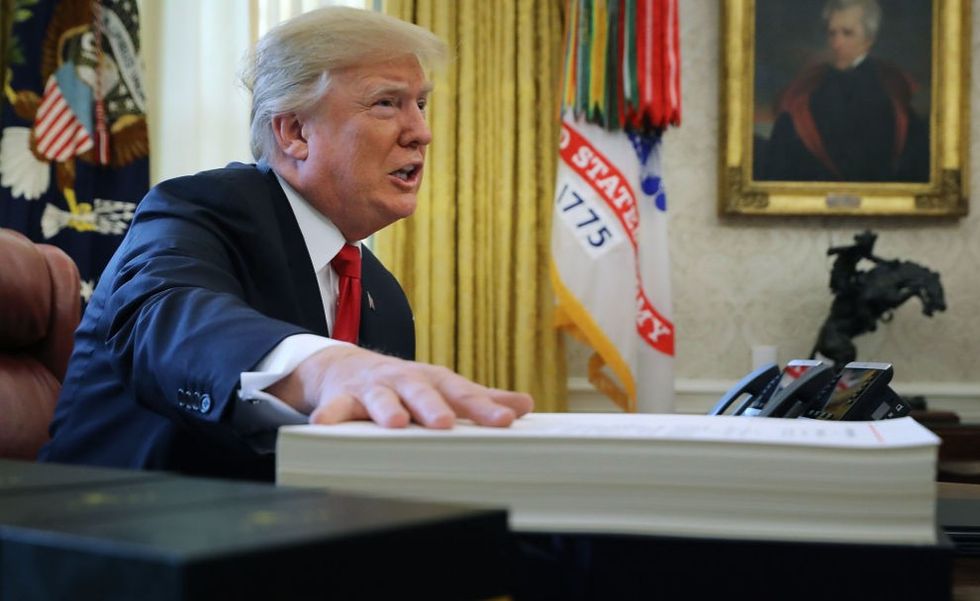 According to two former White House staffers, President Donald Trump's filing system for official documents — legally required to be preserved — involves tearing them into tiny pieces so a highly paid staffer can Scotch tape them back together again.

No, this is not satire.

Solomon Lartey and Reginald Young Jr. were career civil servants working in records management, with about 50 years of service combined, when Trump took office. Shortly after, it became clear records management under the new president would be very different when compared to President Barack Obama.

Under federal law, specifically the Presidential Records Act, the president must preserve: "all books, correspondence, memoranda, documents, papers, pamphlets, works of art, models, pictures, photographs, plats, maps, films, and motion pictures, including, but not limited to, audio and visual records, or other electronic or mechanical recordations, whether in analog, digital, or any other form."

Trump previously learned of the law in regards to his Twitter account. As such, he is not allowed to delete anything he tweets as president. As such, he follows the guidance, even when others wish he would delete some of the things he tweeted.

But not so with paper documents.

According to Larter and Young, staffers originally were shocked when presented with piles of bits of paper and Scotch tape to put back together "like a jigsaw puzzle." They initially tried to get Trump to stop his habit of tearing things up.

But when he proved unable or unwilling, they simply gathered the bits of paper from the trash and off the floor of the Oval Office.

"We got Scotch tape, the clear kind," Lartey stated. "You found pieces and taped them back together and then you gave it back to the supervisor."

I had a letter from [Senate Minority Leader Chuck] Schumer — he tore it up. It was the craziest thing ever. He ripped papers into tiny pieces."

Lartey said under Trump, the White House reassigned his entire department to the task of taping paper back together. Young , who was a senior records management analyst, said in over two decades of government service, he had never been tasked with anything like it.

"We had to endure this under the Trump administration," Young said.

I’m looking at my director, and saying, ‘Are you guys serious?’ We’re making more than $60,000 a year, we need to be doing far more important things than this. It felt like the lowest form of work you can take on without having to empty the trash cans."

According to Young and Lartey, records management staffers were still sorting through, piecing together and taping the results of Trump's quirk as recently as this spring. Part of the dissatisfaction comes from how prior presidents handled records.

Under the Obama administration, the president's staff ran a structured paperwork process.

"All of the official paper that went into [the Oval Office], came back out again," said Lisa Brown, who served as President Barack Obama’s first staff secretary. "I never remember the president throwing any official paper away."

Brown described a well organized process for dealing with presidential records. All paper going to the president “would go in a folder with labels — one color for decision memos, for example — and another one for letters. Documents would go out to the president and then come back to the staff secretary’s office in the same folder for distribution and handling. It was a really structured process.”

In contrast, one person familiar with how Trump operates in the Oval Office said the president rips up "anything that happened to be on his desk that he was done with." To keep Trump in compliance with federal law — although it is the president's responsibility according to that law — staffers must gather all scraps and bits of paper they see in the Oval Office.

However the team handling that part of Trump's presidential duties is smaller. Many of the career officials in records management were forced out earlier this year. Lartey and Young among them.

The two men were originally approached to discuss what they deem wrongful termination. In the course of those interviews, the story about Trump's poor records habits and willful disobeying of federal law came out.

The men did not approach the press with an embarrassing Trump story. The press approached the men for a story about their dismissal from federal service after long successful careers and then discovered the president's embarrassing personal habit.

Lartey said he was fired on March 23, with no warning. His top-secret security clearance was revoked and five boxes of his personal belongings were mailed to his home by the White House.

"I was stunned," Lartey said.

I asked them, ‘Why can’t you all tell me something?’ I had gotten comfortable. I was going to retire. I would never have thought I would have gotten fired."

Lartey signed a resignation letter pre-written and presented to him by the personnel office handling his termination. It's unknown who exactly wrote the scripted resignation letters fired staffers were told to sign.

The letter stated he was voluntarily leaving to pursue other opportunities. Lartey is still unemployed.

Young, who was terminated April 19, fought back against the factually challenged resignation letter and had his official status changed from "resigned" to "terminated." A fired employee has rights an employee who voluntarily resigns does not.

Both men admit to being vocal with their management chain about the absurdity of highly paid personnel covering up for a president's alleged repeated violations of federal law with Scotch tape.